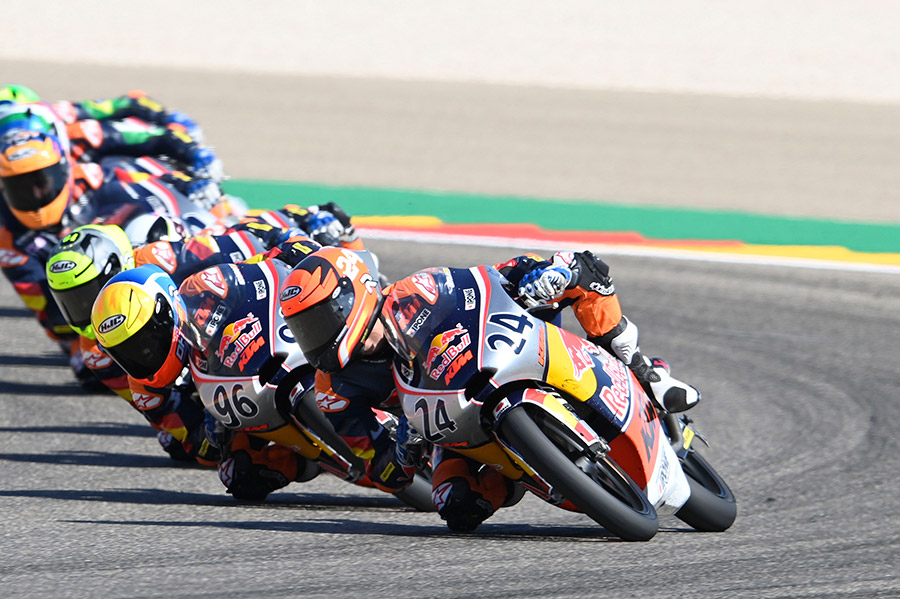 The final Red Bull MotoGP Rookies Cup race of the season went down to the line with Ivan Ortolá snatching the lead from Pole man and Saturday winner Daniel Holgado into the final corner as Cup winner David Alonso overlapped them in a seven KTM mass finish.

The winning margin was just 0.006 seconds for Ortolá the 17-year-old Spaniard over his 16-year-old fellow countryman Holgado. Alonso, the 15-year-old Colombian was 0.050 behind and 0.108 ahead of David Muñoz in 4th, less than half a second covered the top 7.

Ortolá’s first win of the season

“It was an amazing race today. Yesterday the clutch broke in the race and I was a little bit unlucky but I knew that I had the pace to battle for the win,” explained Ortolá who also won at Motorland Aragón last season.
“Today I made a good start and got into first position in a few laps. The race was very difficult but I stayed in the group all the way and finally I could finish the Red Bull Rookies Cup championship with a first place.”
“I have to thank my mechanic and everyone who supports me and for the Rookies Cup because this is an opportunity for two years at an amazing level and you learn a lot.”

“It was an incredible race for me. My last race here in the Cup was amazing and thanks to the Rookies Cup family for everything.”
“It was a difficult race because of the track conditions, very hot, the back tyre was sliding but I had a good feeling with it this weekend. I am very happy with my last race, I did a good job here this weekend and I thank my supporters and family.”

“It was a very positive race, it was a present for me because the championship was already won yesterday and so the only goal for me was to enjoy it a lot every lap and that is what I did.”
“I enjoyed the bike, the overtaking. I was always on the front and the position is good but whatever the position it would be good. To finish on the podium in the last race is wonderful and it was an incredible season.”
“I really appreciate the Colombian fans and I want to thank them for their support as well as everyone here.”