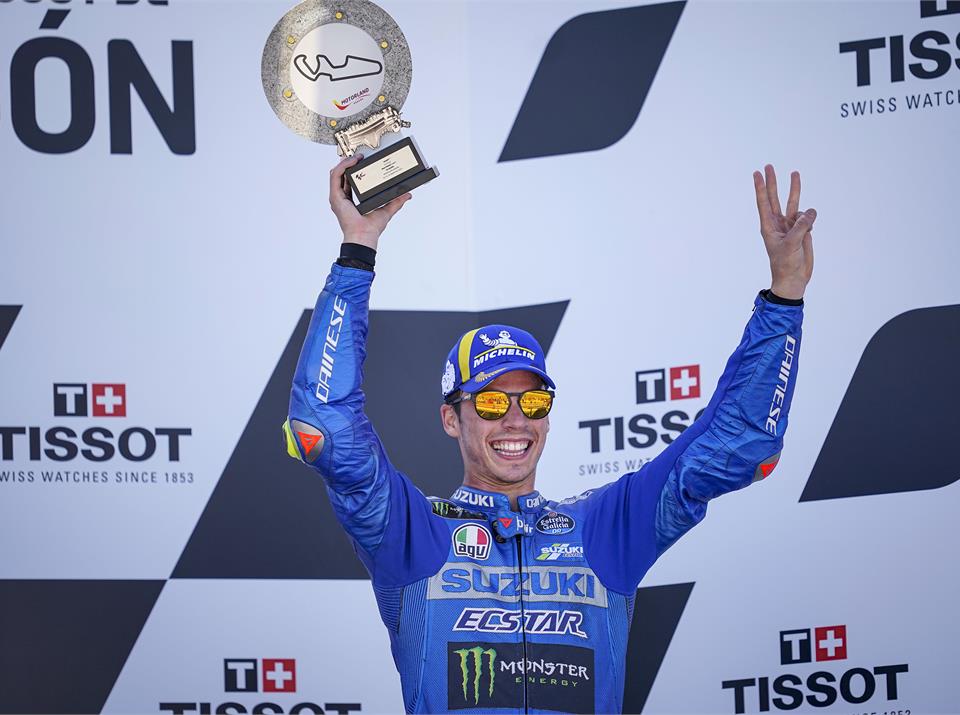 A misty morning at Motorland Aragón quickly cleared to make way for a scorching Sunday and a thrilling race day. Joan Mir and Alex Rins both opted for the hard-soft tyre combination ahead of the 23 lap race and despite starting seventh and 20th on the grid respectively, both were ready to do battle.

By the end of the first lap, Mir had made it up to fifth and Rins up to 15th, and by the fourth lap of the race Alex had climbed to 12th. The race began to spread out a little as each rider slotted into their rhythm and everybody was keen to preserve their tyres. Mallorca’s Mir maintained his fifth place spot, keeping an eye on the gap behind him whilst also keeping the leading four riders in his sights. On the 12th lap of the race, Mir climbed two places in quick succession, placing himself in a podium position.

Rins began to struggle with front end feeling, although he reported it was different to what he had experienced earlier in the weekend. But the Spaniard was determined not to give up at this track that he likes so much, continued to battle on and retook 12th from Pol Espargaró.

Mir, aware of the widening gap in front of him to the duelling duo, decided to play a wise game. And when Aleix Espargaró closed in on him in the final laps he responded to the pressure and kept the Aprilia rider at bay to take his fifth podium of the season.

With these results, Mir keeps the title leaders within reach and Team Suzuki Ecstar move up to third in the Teams’ standings and Manufacturers’ standings.

“I’m a bit disappointed, despite the podium, because I wasn’t able to be as fast as I wanted. But the important thing was that I managed to be really consistent and feel comfortable on the bike. The team and I put in a lot of effort and that resulted in a third place finish, which was good, but I was hoping to have winning pace. The track was very hot and all weekend it was hard to get optimal grip and feeling, but I kept fighting and this podium brings us positivity and some nice points. We’ll keep pushing to improve for the remaining rounds. I’m not thinking of the title, I just want to get the best possible result at every race.”

“It was a very, very difficult race. In the first part I overtook a lot of riders, but then when I went onto the long straight I was fast but I was also keen to maintain the condition of the tyre. I got up to 12th and then I started to feel quite strange with not much grip or feeling in general. I wanted to do the best job possible, but in the end I couldn’t gain any more places. I don’t feel so bad because I gained a lot of places compared with my grid position and I’m ready to move on to Misano and try again.”