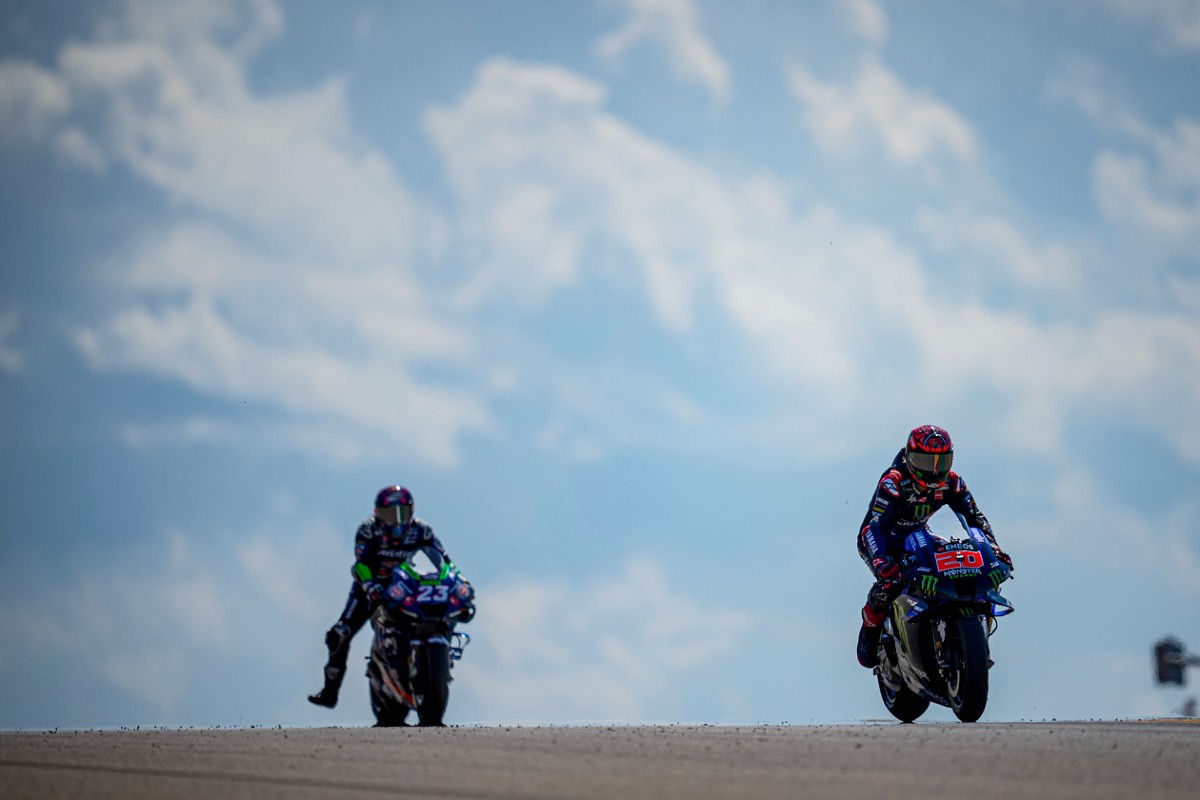 Monster Energy Yamaha MotoGP‘s Fabio Quartararo wasn‘t able to put in the charge for the podium he had in mind in today‘s Gran Premio de Aragón. Nevertheless, he pushed to the limit and collected 8 crucial points. Cal Crutchlow also showed his fighting spirit. After falling back to 19th in the opening stages, he recovered to 16th place.

Quartararo wheelied a bit from third on the grid to emerge as fifth after the tight first two corners. He later lost places to Joan Mir and Jorge Martin and completed the first lap in seventh.

The Frenchman struggled to stay with the front group. He had to regain ground very gradually to close the 0.8s gap to the rider ahead of him, whilst at the same time nursing his soft rear tyre to prevent a big tyre drop at the end of the race. He was trying to close in, but riders from behind soon spoiled his charge.

The number-20 rider lost positions to Iker Lecuona and Brad Binder and then used the nimble YZR-M1 to defend his position from an insistent Enea Bastianini. He was doing an amazing job of fending off the competition for as long as possible. Just when he gained a spot as Lecuona went wide, he lost a position himself to Bastianini. But El Diablo wasn‘t out for the count just yet. He regrouped for a late dash to the finish line. He challenged Martin for eighth position on the penultimate lap and won the fight by 0.040s, taking the chequered flag in eighth place, 16.575s from first.

Cal Crutchlow had a decent start from fifteenth on the grid but did lose four positions before crossing the start-finish line for the first time. However, after an eventful opening lap the Briton started to find his rhythm. He overtook Maverick Viñales on lap 2 and started a battle with Luca Marini on lap 3. Crutchlow and Marini swapped positions multiple times, but it was the Yamaha man who came out victorious.

Having secured 17th place, it looked like the remainder of the race would be a lonely ride for the Brit. Yet he kept his head down, using it as a good opportunity work on being one with the YZR-M1. His dedication was rewarded when he gained another place overtaking Johann Zarco.

The number-35 kept focused on his own race and was making further strides. He had Danilo Petrucci in his sights but came just 0.690s short of claiming a championship point. Crutchlow finished the race in 16th place, 26.413s from the front.

After today’s results Quartararo’s lead in the championship stands at 53 points, with a 214 points total. Replacement rider Crutchlow hasn’t scored any points this season and remains in the 27th spot in the rankings. Monster Energy Yamaha MotoGP stay in first place in the team standings with 309 points. Yamaha are now second in the constructor championship with 242 points.

The Monster Energy Yamaha MotoGP Team will be back in action next week at the Misano World Circuit Marco Simoncelli for the Gran Premio di San Marino e della Riviera di Rimini.

I‘m not happy, because it was strange today. I improved my pace this morning, but something strange happened during the race. These things can happen sometimes. It‘s a bit sad that this time it was during the race, but it‘s not a total disaster. We will work hard to analyse what happened, and next week we will be riding in Misano. That‘s a track that I really like, so we just need to turn over the page. I still think we did a great job. It‘s just a shame about the result at the end of this weekend.

I did enjoy it, and that‘s the main thing. Enjoying the race and getting the information for Yamaha was our aim for this weekend. I‘m disappointed with my position, but my position was severely hampered after the first lap contact with I think it was Alex Marquez. I had made a great start to eleventh already. I had the pace for a top 10 today I believe, but I ran off track, ran across the grass, came back on track, and then I hit another rider. I was back in 20th or something. I had to make up some positions, that was okay. I got held up by Marini after this, then I came across a 2s gap to the group in front of me. We struggled today, but it was good for information. I was pleased with my pace when I was not battling or something like that, which is positive. This means we can keep testing in a good way, because I will be testing here in two weeks‘ time again.