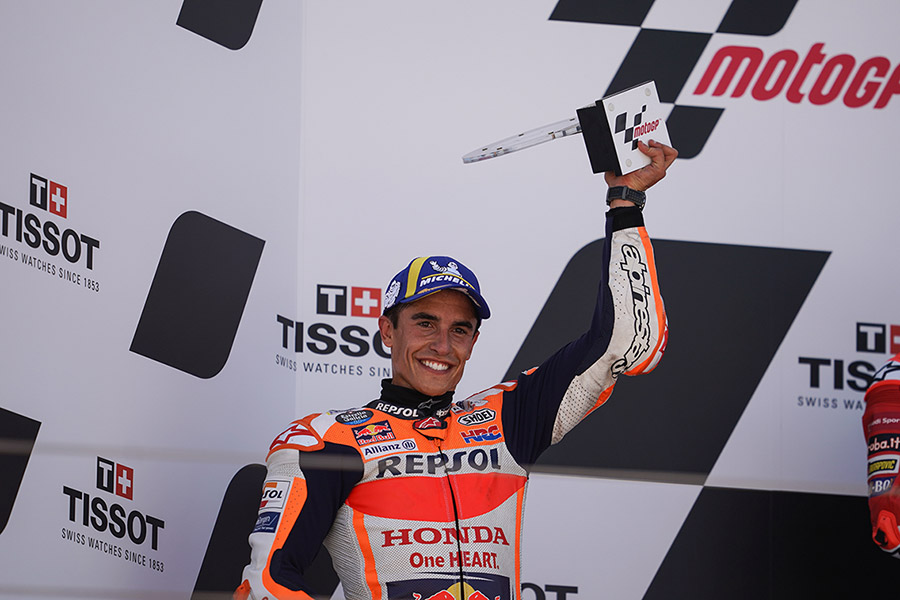 The MotoGP Aragon Grand Prix was decided in an intense duel between Marc Márquez and Pecco Bagnaia. The Repsol Honda Team rider was at his best throughout the contest, fighting for victory until the final lap amidst countless overtaking exchanges with the Italian rider, eventually finishing in second position.

Repsol Honda Team teammate Pol Espargaró got a good start, but although he remained in the Top 8 during the opening laps, he finished the race in thirteenth position.

Márquez is tenth in the overall standings with 79 points. Pol Espargaró is fourteenth, with 55.

The next MotoGP World Championship round will be the San Marino Grand Prix, held next weekend.

“I pushed hard all race but on the last three laps I really tried everything. Sometimes when you try like this you make a mistake, you crash and the result isn’t good. But I still tried and I think everyone watching it enjoyed a lot! I knew it would be really difficult, fighting against the Ducati is hard because they brake very late and accelerate very well plus today, Pecco was riding in a perfect way. It was a great battle with him, I enjoyed it a lot. After two crashes in a row, it’s not easy to give everything and put it on the line like in this race. In Turn 1 on the last lap I couldn’t stop well and I couldn’t make it happen at Turn 5 either. My last chance was Turn 12 but as soon as I went to the dirty part of the track, I knew it would be impossible and I ran wide I’m happy because we were able to fight and our race pace was fast and also because this race provides extra motivation to me, to HRC and everyone in the box. Thanks to everyone for their hard work.”

“I wasn’t fast today, I did not have a good feeling with the bike in the hotter conditions and I struggled from the start. I was unable to ride as I wanted and I lost too many places at the start, there were points in the race where I felt better and I was able to make up some ground, but the group ahead had been lost. With just a little more grip I can really ride the bike with my style as I want, but when the conditions are like this I can’t ride the bike like I want to. Now we get ready for Misano where probably the conditions will be similar, so we have to keep working to see what’s possible and how to improve. Marc shows that the bike can be strong in these conditions, I just need more time on the bike to understand what to do.”