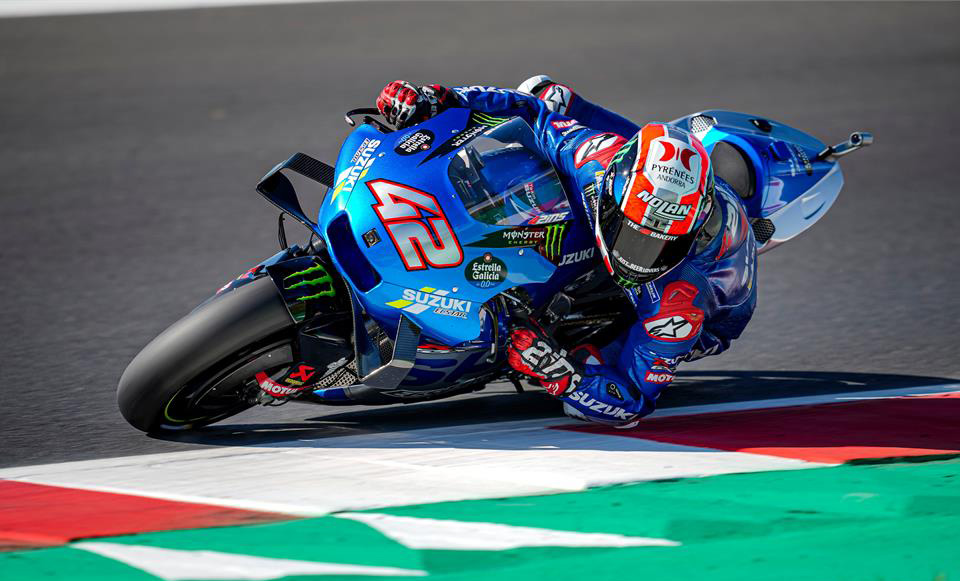 Team Suzuki Ecstar’s riders took to the track on Saturday morning under sunny skies in San Marino. Flying laps were the order of FP3 with times plummeting compared with those set during yesterday’s rain-hit sessions.

Joan Mir was quick to get down to business with his early pace, and Alex Rins stuck close by his team-mate. The pair finished FP3 in fourth and eighth respectively, securing direct passage to Q2. Mir showed his strength being second fastest in sectors 1 and 4, and third fastest in sector 2.

With their race pace strong the Suzuki riders decided to focus on tyre options and optimising their feelings with the GSX-RR during FP4. Despite their focus away from setting fast laps, Rins finished this session second and Mir fifth.

The final qualifying session, Q2, didn’t go to plan for either of the pacey pair. Although Mir was straight out of the box to top the timesheet, he soon dropped back as the rest of the field set their laps. Similarly, Rins was into the Top 5 early in the session. But in the final exits, with all the riders so closely matched on times, there were several crashes. The subsequent yellow flags affected both Suzuki riders as they lost flying laps, and an accidental message on Mir’s dashboard cost him some time for any additional fast lap attempts. Rins will start tomorrow’s San Marino Grand Prix from ninth place, and Mir from 11th.

“FP3 and FP4 went really well for me, I felt very good with the bike and my lap times were strong too. Tomorrow will be really unpredictable; it could be wet or dry or something in between! But we feel quite ready to fight, we’re on the third row and ninth is quite good – especially if it’s dry I feel pretty confident. I gave 100% during qualifying, but in the end we still struggle in this area and we’re far from pole. All the riders are close and we’ve seen a lot of crashes in these two days, so we will need to be careful. If it’s wet it becomes a lottery, but if it’s dry I think it could be an exciting fight.”

“Overall, today I’ve been competitive and riding hard. I felt strong, and even though things didn’t go to plan, I’m quite happy. Qualifying was a shame; we didn’t have the potential to fight for pole and we’re honestly quite far from that. I felt that the second row was possible, but then I had some trouble with the front on my first exit, then I saw a message on my dashboard right after I exited for the second run. I thought I should stop in case there was something wrong with the bike, and in the end this impacted my qualifying as well as the yellow flag on my last flying lap. There’s no point being frustrated; the focus now is on the race and I know I have good pace if I can get a strong start.”