Another Ducati 1-2 with Bagnaia on pole and Miller 2nd in #SanMarinoGP qualifying, Pirro to start 14th 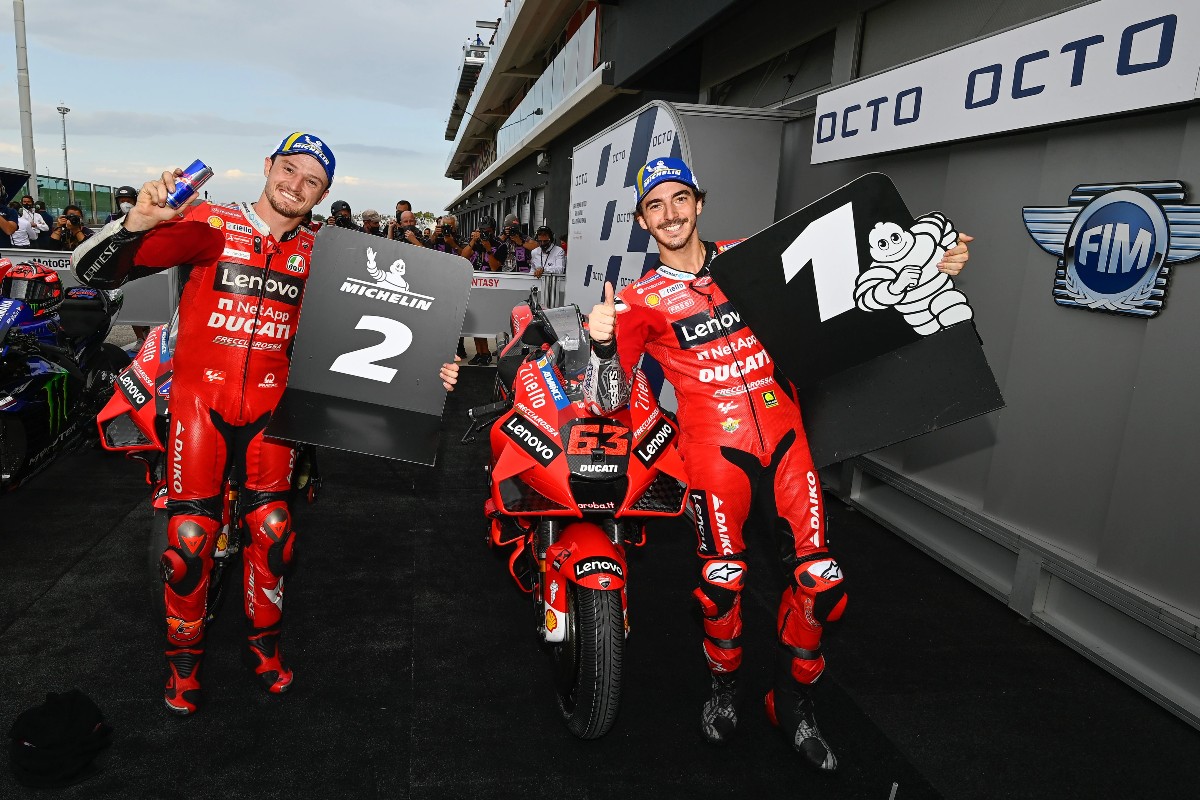 Francesco Bagnaia and Jack Miller will once again start in front of everyone in tomorrow’s MotoGP race at the Misano World Circuit “Marco Simoncelli”. Just seven days after their superb one-two finish in qualifying at the MotorLand Aragón, the Ducati Lenovo Team riders repeated their performance today, once again taking the top two positions of the grid for the Grand Prix of San Marino and the Riviera di Rimini.

It has been a perfect weekend so far for Bagnaia that, after topping the combined standings at the end of the first three free practice sessions, continued to set the pace also in FP4. As he went straight into Q2, the Italian rider put in a perfect lap during the second qualifying session, setting a new all-time lap record in 1:31.065 to claim his second consecutive pole position after Aragón. Pecco will also start from the front row for the sixth consecutive time this year. Miller also continued his positive race weekend at Misano: the Australian rider, third after FP3, set the second-fastest time in the final minutes of Q2, finishing in 1:31.314, 249 thousandths behind his teammate.

Michele Pirro, Ducati Test Team test rider and wild card this weekend at Misano, will start from the fifth row, with the fourteenth fastest time.

I’m really delighted with this result! Again this weekend, we had to make only a few adjustments to the bike since I have felt comfortable on it right from the start. I wasn’t sure I could take pole in qualifying because Quartararo was going so fast, but I managed to set a great time! The team is doing a great job, and we were fast also in FP4, so I’m very optimistic heading into tomorrow’s race.

I’m thrilled with my result in qualifying today, and I was also surprised. My first attempt on the soft tyre didn’t go particularly well, and when I went out on the second one, I took the yellow flag on the first lap. I was nervous because I thought I didn’t have enough time to try again. Fortunately, I could get through before the chequered flag and finish the second lap with a very good time. Now we’ll have to work on the data we collected in FP4 to see where we can still improve, but in general, I’m confident for the race.

I’m a little disappointed with the qualifying result. This morning, because of the yellow flags, we couldn’t get into Q2, which made everything a little bit complicated. In Q1, there was a lot of traffic, and I didn’t get through to the next session just a few tenths of a second. Anyway, I’m happy that we have two Ducatis starting on the front row and four of our bikes in the top five positions on the grid. I’ll do my best to try to finish our home race in the top ten.

The Ducati Lenovo Team will be back on track tomorrow at 9:40 am for the warm-up, while the race will get underway at 2 pm local time over a 27-lap distance.