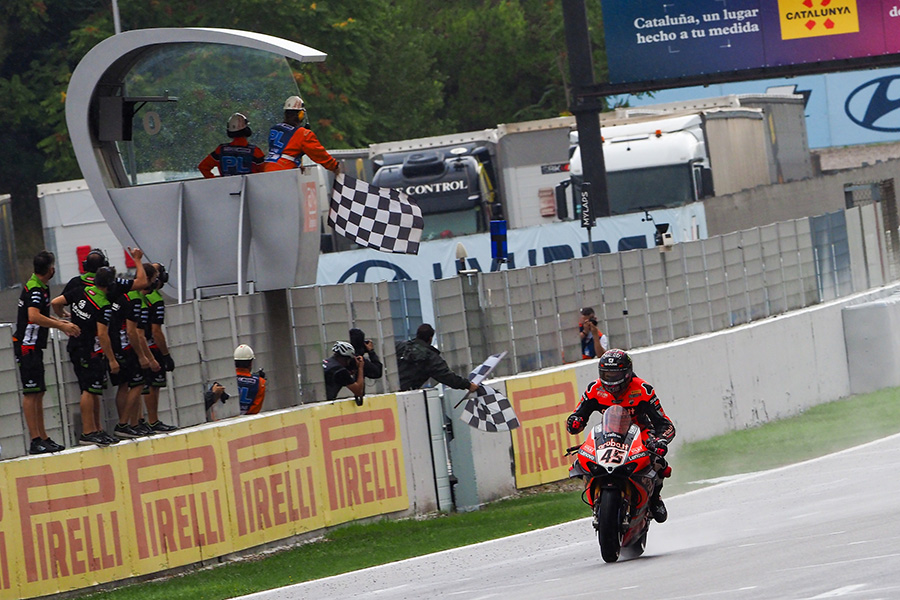 A pre-race rain downpour provided the perfect recipe for Race 1 at the Hyundai N Catalunya Round as Scott Redding (Aruba.it Racing – Ducati) put in a late surge for victory at the Circuit de Barcelona-Catalunya with Axel Bassani (Motocorsa Racing) claiming his first MOTUL FIM Superbike World Championship podium, as the fight for the Championship took yet another twist in Spain.

At the start of the race, Jonathan Rea (Kawasaki Racing Team WorldSBK) found himself down in tenth at the first timing point but battled his way back to the lead after Toprak Razgatlioglu (Pata Yamaha with Brixx WorldSBK), who was forced to retire from the lead of the race on Lap 15 with a technical issue. The final results mean Rea has a six-point advantage over Razgatlioglu in the Championship standings.

As Rea pulled away at the front, Axel Bassani (Motocorsa Racing) battled his way to the front and fought with Razgatlioglu in the first half of the race before the pair closed the gap to Rea while battling. Eventually they bought found their way past the six-time Champion before Bassani took the lead when Razgatlioglu pulled over with the technical issue. As the 20-lap race progressed, the two factory Ducati riders of Michael Ruben Rinaldi and Scott Redding (Aruba.it Racing – Ducati) found pace.

In the closing stages, Redding passed teammate Rinaldi for second before making a move on the Independent Ducati of Bassani for the lead with a handful of laps to go as he claimed the lead of the race, ahead of Bassani and Rinaldi who secured Ducati’s first 1-2-3 finish since Assen 2012.

After two years away from the top step of the podium in the FIM Supersport World Championship, Randy Krummenacher (CM Racing) was back on top after a rain-affected Race 1 at the Circuit de Barcelona-Catalunya for the Hyundai N Catalunya Round after switching tyres in the early stages of the race.

Only two riders opted to stay out at the end of Lap 2 when the entire field pitted with One Event rider Loic Arbel (Andotrans Team Torrento) and Shogo Kawasaki (G.A.P. MOTOZOO Racing by Puccetti) opting to stay out. While they gained track position initially, the switch of tyres proved to be the better strategy with Steven Odendaal (Evan Bros. WorldSSP Yamaha Team) coming out of the pits first. It was announced that Odendaal would be one of a handful of riders to be punished for a pit lane intervention time infringement, with Odendaal having 25.845s added to his race time. Riders were required to stay in the pit lane for 1’21s.

Krummenacher was able to pass Odendaal on track and went on to build a gap of around 16 seconds at the end of the 18-lap encounter with Spanish rider Manuel Gonzalez (Yamaha ParkinGo Team) able to take advantage of Raffaele De Rosa (Orelac Racing VerdNatura) passing Odendaal into Turn 9 to move into second place, with De Rosa third. Although Odendaal crossed the line in fourth, Odendaal was classified eighth after the penalty was applied. Victory for Yamaha machinery means they have now claimed 110 victories in WorldSSP and Gonzalez’s second place makes it 300 podium placements for the Japanese manufacturer.

It was a run to the line to decide multiple positions in the FIM Supersport 300 World Championship at the Circuit de Barcelona-Catalunya with 2020 Champion Jeffrey Buis (MTM Kawasaki) claiming his second victory of the 2021 campaign by just one tenth of a second ahead of Bahattin Sofuoglu (Biblion Yamaha Motoxracing) during the Hyundai N Catalunya Round, while Championship contender Tom Booth-Amos (Fusport – RT Motorsports by SKM – Kawasaki) scored no points after a Turn 1 crash.

Buis made his move on the final lap of the 12-lap encounter to claim his sixth career victory in WorldSSP300, closing the gap to Booth-Amos and teammate Adrian Huertas in the Championship standings. Buis finished ahead of Sofuoglu by just 0.116s as the Turkish star claimed his first podium since WorldSSP300’s visit to Magny-Cours in 2020.

The battle for third was between brothers Ton and Meikon Kawakami (AD78 Team Brasil by MS Racing) with just 0.004s separating the pair as they crossed the line, with Ton claiming his first WorldSSP300 podium and levelling things up between the two brothers, with the pair two tenths behind Sofuoglu; Meikon claiming fourth place.

#CatalanWorldSBK
Get All Our Latest News Sent Direct To Your Inbox
Join 30,242 other subscribers.
Follow on Social Media
Get the VROOM Podcast