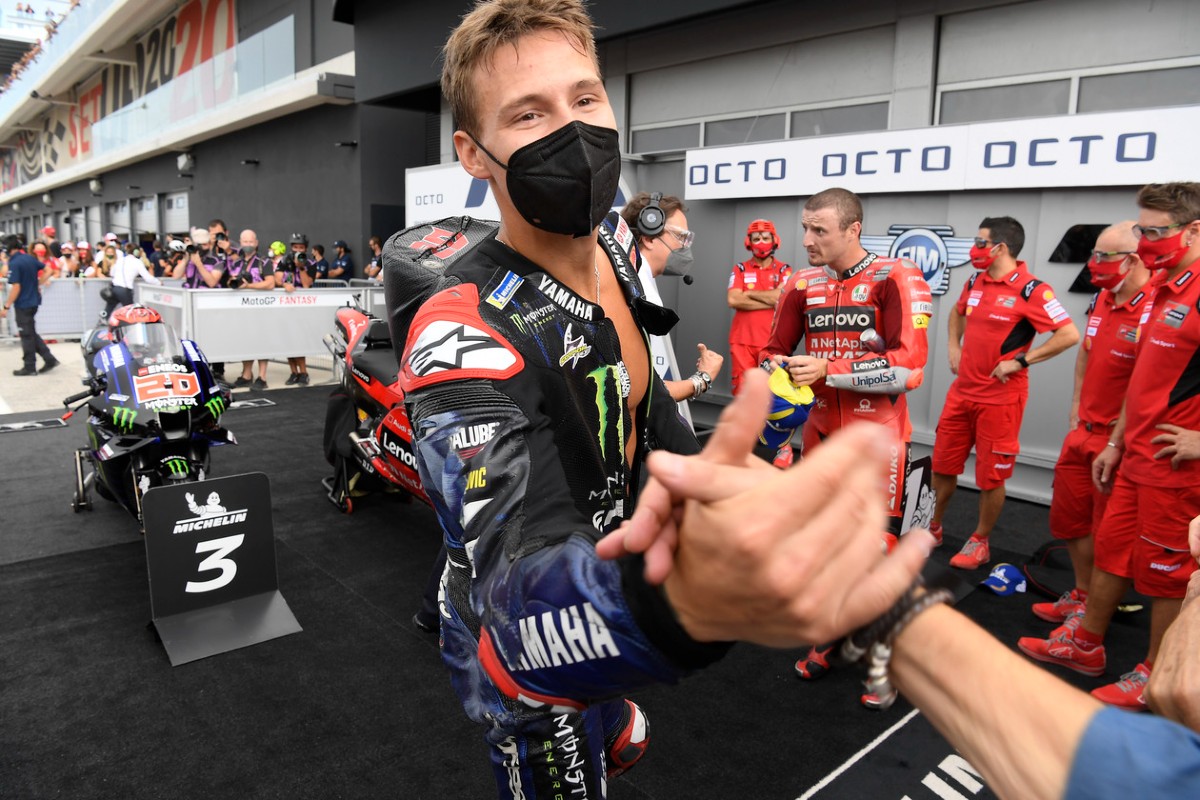 Monster Energy Yamaha MotoGP‘s Fabio Quartararo brought out his do-or-die mentality in the GP di San Marino e della Riviera di Rimini Q2 session. He pushed to the limit, and despite a late crash, secured third on the grid. Franco Morbidelli put in a promising first half of the Q1 shoot-out, but he was unable to improve on his second run and will start tomorrow‘s race from sixteenth on the grid.

Quartararo waited for most of his Q2 rivals to exit pit lane ahead of him. Only 35 minutes before, the Frenchman had wrapped up FP4 in first place, filling him with extra fire ahead of the 15-minute contest. His benchmark lap of 1‘32.097s put him firmly on provisional pole, with a 0.747s gap to second, but the times were dropping fast. The Yamaha man responded though. He set a 1‘31.367s, climbing back up from fifth to first.

The number-20 rider stayed out for an extra lap, setting a time that was only 0.041s slower than his personal best. Thanks to this, he missed the bustle of riders trying to find a tow. With six minutes on the clock, Quartararo arrived at the box for a fresh set of tyres. Two minutes later, he was back on his way and had time for two more tries. Unable to improve on his first one, El Diablo dropped to second. He was resolved to push extra hard on his last attempt, but a front-end crash in Turn 1 ended his charge prematurely. However, his earlier 1‘31.367s lap still earned him third place, 0.302s from first, keeping his front-row start run going.

Morbidelli was quick to leave pit lane at the start of Q1. His benchmark lap was cancelled due to the number-21 rider exceeding track limits, but his second flying lap, a 1‘32.296s, briefly put him on the board in P1.

He held second place as he arrived at the Monster Energy Yamaha MotoGP box with more than eight minutes remaining. Two and a half minutes later, he was back on his way, poised to defend his top-2 result. The Italian used an extra lap to get heat into the tyres, and he was pushed to fourth place during his next lap, that was filled with yellow flags. So, the pressure was on his final attempt. The Yamaha man started it with a red sector, but ultimately wasn‘t able to improve on his best time from Run 1 and ended the session in 6th place, 0.420s from first. He will start the San Marino GP from 16th on the grid.

I‘m perfectly okay after the crash. When you want pole position, you‘ll try anything. I was braking super late in Turn 1. I knew it was pole position or nothing, and unfortunately today it was nothing. But overall qualifying was good. I gave it a try. As always, our main goal was the front row and we got that. I‘m feeling okay, and our pace is really good compared to Aragon, there it wasn‘t so great. I think we‘ve done a really great job today. I‘m feeling ready for tomorrow. Of course, I hope for a dry race. My feeling in the dry is super good, so I want to keep going in that direction. We‘ll see what position I have after the first lap, and I will do my best. The race is long, so I‘ll be taking it step by step.

I’m really happy and pleased about these two days. We are already trying to find a base set-up that I like on this bike, and we already could almost go directly into Q2 this morning, we were just two tenths shy of it. This afternoon in Q1 we tried again. We didn’t manage it. Finally we’re about 0.270s off the top 2 and ended in P6. This shows again the level of this category. But I’m really pleased with this performance. Looking at the situation I’m in right now, I need to be – and I am – happy.