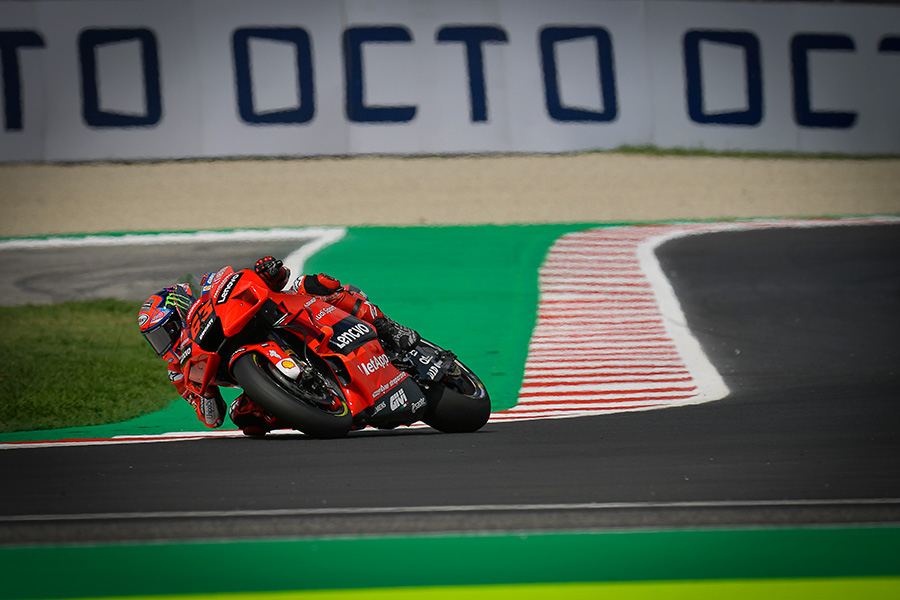 Francesco Bagnaia (Ducati Lenovo Team) remains the man to beat as the sun sets on Saturday at the Gran Premio Octo di San Marino e della Riviera di Rimini, with the Italian setting another all-time lap record to take pole position. It’s his third of the year and with teammate Jack Miller in second, the first factory Ducati 1-2 in back to back Grands Prix. To copy-paste the front row from MotorLand but with a seemingly pretty different race ahead, it’s Fabio Quartararo (Monster Energy Yamaha MotoGP) in third despite a crash for the Frenchman in Q2.

Enea Bastianini (Avintia Esponsorama) is on a good roll of form recently and the rookie topped Q1 on home turf, setting the fastest lap to head through ahead of eight-time World Champion Marc Marquez (Repsol Honda Team). The number 23 unfortunately then slid out after the flag, but no harm done, although there was plenty of drama earlier in the session.

On track it got close too, with Marc Marquez’ final run seeing the number 93 catch HRC test rider Stefan Bradl and lose a little time – the German also on a hot lap and entitled to keep pushing – and Bastianini also found himself tucked up behind Alex Marquez (LCR Honda Castrol). In the end though, Bastianini remained unthreatened in first regardless, and Marc Marquez took that second spot in Q2.

Bagnaia left it relatively late but once again arrived on provisional pole in style. The Italian smashed in his new record with just under two minutes to go, slamming down the gauntlet. He already had the best race lap at Misano, so why not add the all-time lap record? Miller moved into second not long after that but couldn’t quite get in touch, with everything then left to Quartararo. Could the Frenchman do it?

He has done before with some Saturday heroics but this time wasn’t to be, as he suddenly slid out of contention and early in the lap too. The last likely challenger to Bagnaia’s cloud nine of a week so far had to bow out, rider ok but not able to improve from third.

There was also drama for Marc Marquez and Aleix Espargaro (Aprilia Racing Team Gresini) as both crashed out – separately and in that order – losing the chance to move up the order in the latter minutes.

A Ducati 1-2 sees Bagnaia and Miller ready to prime those holeshot devices at Misano, with Quartararo on the outside of the front row. With Bagnaia’s pace looking mighty, the Frenchman will want to make sure he stays on the two Ducati Lenovo Team machines as a minimum at lights out.

El Diablo also finds himself with a Ducati armada behind as Jorge Martin (Pramac Racing) slotted into fourth, top Independent Team rider just ahead of teammate Johann Zarco, who continues to suffer arm pump issues but pulled a solid lap out the bag on Saturday.

Pol Espargaro (Repsol Honda Team) edged out teammate Marc Marquez in the end to complete the second row, with MM93 shuffled down to the head of Row 3. He’s joined by fellow Q2 crasher Aleix Espargaro, with the Aprilia rider losing out on P7 by just 0.002. it’s still the Noale factory’s best qualifying at Misano though. Alex Rins (Team Suzuki Ecstar) will start ninth after a step back forward at Misano.

Guess who’s tenth? Yep, it’s Maverick Viñales (Aprilia Racing Team Gresini). After going fastest on Friday and getting straight into Q2, his second weekend with the Noale factory is going well and he’ll line up there. He has reigning Champion Joan Mir (Team Suzuki Ecstar) for company, the number 36 left frustrated after some miscommunication saw him box at the wrong time, with Bastianini the last of Q2 in P12.

Franco Morbidelli (Monster Energy Yamaha MotoGP), meanwhile, was provisionally up there early on in Q1 but ended up P16 as he gets back in action following surgery on his knee. The back row of the grid will also have some serious firepower as Rossi lines up alongside returning veteran Andrea Dovizioso, who continues to settle in at Petronas Yamaha SRT and on the YZR-M1.

Raul Fernandez (Red Bull KTM Ajo) keeps impressing and the rookie again took pole at the Gran Premio di San Marino e della Riviera di Rimini, the first since MM93 to take five or more in a rookie Moto2™ season. He’s joined by Sam Lowes (Elf Marc VDS Racing) in second, with Lowes’ teammate and man on form Augusto Fernandez taking third – back on the front row for the first time since 2019. Given his recent run of podiums, that could be a warning shot.

There were no crashes, a low drama session despite the stakes.

It was dry enough to push and P1 changed hands a number of times as the clock ticked down towards zero, with Raul Fernandez and his teammate, Championship leader Remy Gardner, trading fast laps with Aron Canet (Inde Aspar Team) and Fabio Di Giannantonio (Federal Oil Gresini Moto2). But with four minutes remaining, it was Brit Lowes who had just fired himself to the top of the timesheets as he zeroed in on consecutive poles.

Shortly after, Jorge Navarro (+Ego Speed Up) tried to get in on the front row fun, but his effort was quickly knocked back by Gardner and Canet, with the Spaniard pulling off a brilliant save seconds after recording a personal best time. Then it was Augusto Fernandez’ turn to crash the party, slotting in just behind Lowes to make it a Marc VDS one-two as riders began to take the chequered flag.

The session wasn’t just over yet though, with Raul Fernandez lighting up the screen with red sectors as he obliterated what was the time to beat, securing a fifth pole position of the season.

Fernandez – R heads the grid from Lowes and Fernandez – A, with that already poised for a stunner. Gardner then heads up Row 2, sure to fight it out again, joined by Canet and Navarro in P5 and P6 respectively.

Xavi Vierge (Petronas Sprinta Racing) and home hero Marco Bezzecchi (Sky Racing Team VR46) are next up, with Di Giannantonio leaving it late to post his best lap and take P9 on Row 3. The Italians know success on home turf and will want plenty more, likewise Q1 graduate Dalla Porta as completes the top 10 after a good Saturday at Misano.

Before summer break, Romano Fenati (Sterilgarda Max Racing Team) hadn’t had a pole position since 2017. Now, he’s had three! The Italian put in a stunner on home turf to top qualifying at the Gran Premio Octo di San Marino e della Riviera di Rimini by two and a half tenths, now in the perfect position to bounce back from some bad luck last time out. He’s joined by Aragon winner and key rival Dennis Foggia (Leopard Racing) in second, with Niccolo Antonelli (Avintia VR46 Academy) forced to settle for third by just 0.007.

Carlos Tatay (Avintia Esponsorama Moto3) took the bull by the horns in Q1 to move through with three tenths in hand, followed by Matteo Bertelle despite a crash for the wildcard runner. The Bardahl VR46 Riders Academy rider has been impressive all weekend and kept that rolling as he moved through to Q2. There, he and Tatay were joined by Riccardo Rossi (BOE Owlride) and Ryusei Yamanaka (CarXpert PrüstelGP).

One of last year’s Misano winners, John McPhee (Petronas Sprinta Racing), was the first to lose out – the Brit crashing at Turn 10 and ending the session P5. Tatsuki Suzuki (SIC58 Squadra Corse), another rider who’s been on the top step at the track, also suffered a crash and the Japanese rider will have an even bigger mountain to climb on race day as he didn’t get a lap on the board.

Foggia kept his form rolling as the Leopard rider took to the top on provisional pole, laying down the gauntlet early and turning the tables on Andrea Migno (Rivacold Snipers Team), who beat him to the top in FP3. And there he stayed until right at the end of the session, with Fenati then pulling the pin and pulling out a quarter of a second to take over on pole. The number 55 has won at Misano more than once and will be pushing to do so again from pole.

Foggia nevertheless takes a front row and so does compatriot Antonelli as the number 23 slotted into third, denying Migno a front row start but making it and Italian 1-2-3-4.

Fenati heads the field from Foggia and Antonelli, with the three likely to push for a breakaway and Migno, at the head of the second row, looking to go with them. Jaume Masia (Red Bull KTM Ajo) took fifth and was only 0.012 off Migno too, finding some good form. Then there’s a slightly bigger gap back to Xavier Artigas (Leopard Racing), with the number 43 bouncing back from Aragon to take top rookie honours on the grid.

Rossi shot forward to line up P7 ahead of Elia Bartolini as the Italian and Sammarinese contingent swarm the grid, with Championship leader Pedro Acosta (Red Bull KTM Ajo) shuffled down to ninth, just 0.009 off the wildcard ahead. Tatay completed the top ten, making good on his move through rom Q1.