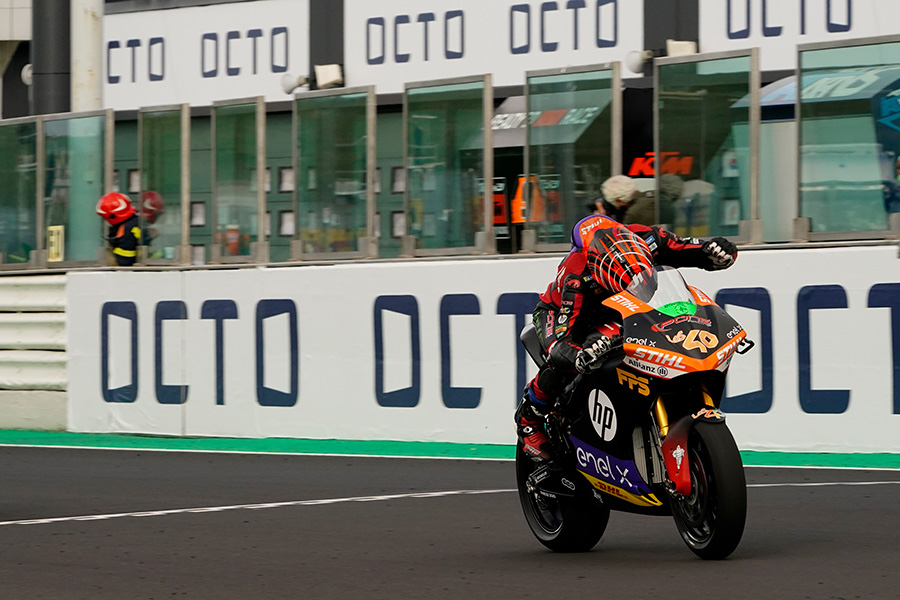 Race 1 at Misano was a big one for the 2021 FIM Enel MotoE™ World Cup, with the crown at stake already – and certainly a hotseat in the standings for the final race of the season on Sunday. As the dust settles, it’s Jordi Torres (HP Pons 40) who emerges as the winner and the new points leader, with the Spaniard playing it to perfection in a wily last corner. Dominique Aegerter (Dynvolt Intact GP) was just pipped to it and was forced to settle for second after seeing off a late lunge from Eric Granado (ONE Energy Racing), with the Brazilian going in too hot and sliding out. Mattia Casadei (Ongetta SIC58 Squadra Corse), meanwhile, rounded out the podium after an impressive return to action.

There was drama from the off as points leader going in, Alessandro Zaccone (Octo Pramac MotoE), crashed early on Lap 1, out of contention and also taken to the medical centre after the Italian suffered post-crash contact from Hikari Okubo (Avant Ajo MotoE). Zaccone was then transferred to hospital for further checks and was found to have an iliac wing fracture in his pelvis. He’s unfit, so will sit out Race 2, and everyone at the FIM Enel MotoE™ World Cup wishes him a quick recovery.

As Zaccone sadly lost his chance to fight for the crown, that battle raged on at the front and was getting tight. Torres had made a great start, joined in a breakaway group by Casadei, Aegerter and Granado, the latter making up some ground, as the four bolted just over a second free of Matteo Ferrari (Indonesian E-Racing Gresini MotoE). The pace was hot and the elbows out, with some stunning moves and certainly a scare for Torres as the Spaniard just clipped the rear wheel of Aegerter. But no harm done, and he slotted back in.

As the final sector of the final lap dawned, Aegerter was holding on in the lead as he put on another masterclass in door-closing, but Granado was close and Torres too. And Granado went for it right at the final corner, all-in and briefly edging ahead. But then hit the heartbreak as the Brazilian slid out, losing a key chance to gain big in the standings.

The attack left Aegerter slightly on the back foot and Torres capitalised to perfection, sweeping past and just able to beat the Swiss rider to the line. For the reigning Cup winner it’s the first victory of the season and it couldn’t have come at a better time, seeing him head into Sunday eight points clear of Aegerter at the top.

Casadei completed the podium after an impressive return for the final round, with Ferrari then classified fourth as he found his podium record at Misano take a dent. He was followed by rookie Miquel Pons (LCR E-Team). The final positions in the top 10 went to Kevin Zannoni (LCR E-Team); an impressive best yet, Fermín Aldeguer (OpenBank Aspar Team), Lukas Tulovic (Tech3 E-Racing), Yonny Hernández (Octo Pramac MotoE) and Xavi Cardelús (Avintia Esponsorama Racing).

It’s now eight points in it between Torres and Aegerter, with Zaccone a further nine behind the Swiss rider and sidelined too. Granado remains in contention, just, but now 24 off the top. Race 2 will see the grid do battle for the final time in 2021, and that could all shuffle again.