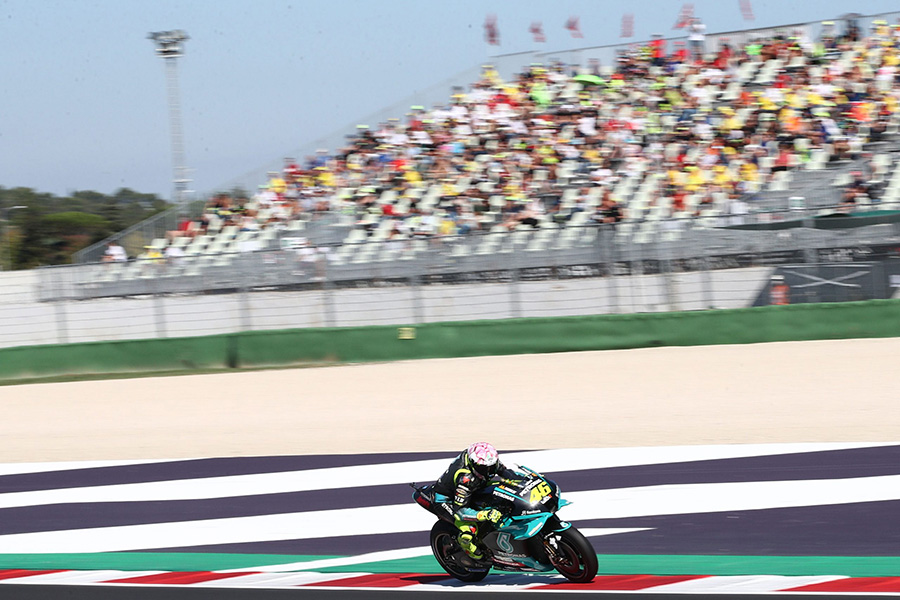 A good start to FP3 saw Rossi set an initial time that placed him just outside of the top-ten, before a Turn 13 crash saw him miss just over ten minutes of the session. Able to get back out with 13 minutes to go, the Italian ended FP3 19th with a 1min 33.053sec lap. Giving his all in Q1, Valentino started the session with the second fastest time – 1min 32.967secs – but experienced a Turn 15 crash shortly after. Returning to the track for the final five minutes, yellow flags unfortunately hindered his final flying laps and Rossi will start tomorrow’s race from 23rd.

Dovizioso continued to make good progress in the morning FP3 session, building speed lap-by-lap throughout the 45 minutes. On his final flying lap the Italian set a time of 1min 33.074secs and ended FP3 in 21st. The start of Q1 saw the Italian put in some strong lap times but, like his team-mate, yellow flags prevented him from improving further in the final minutes of the session. At the chequered flag ‘Dovi’ had set a fastest lap of 1min 33.098secs, which will see him start the SanMarinoGP from 24th on the grid.

I was optimistic for Q1 because I had done some good lap times on the used tyre in FP4, but it was difficult with the hard front tyre. It had better potential but when you are on the left side of it you are on the limit. The first lap wasn’t too bad, but I made a small mistake on the second lap and went wide in Turn 4. I then decided to do one more lap before changing the rear tyre, because I thought I could improve, but I had slowed down a little and the tyre was cold on the left, so I crashed in Turn 15. I don’t have a great position on the grid for tomorrow, but I think I can be a bit stronger than this. I’ll try to have a good start, make some overtakes and have a good race.

I’m not at a point yet where I can fully utilise the full potential of the bike, but I’m happy because I am getting closer and closer. This was our target, it’s what we have to do and now we aim to be fast enough to stay with the other riders in the race. We also need to understand as much as we can to prepare for next week’s test as best as we can. It was nice this morning because from the beginning of FP3 I felt a bit better with my position. Of course it’s not good to be starting from the back, but it’s normal in this situation, and we will try to be consistent throughout the whole race.

#SanMarinoGP, Valentino Rossi
Get All Our Latest News Sent Direct To Your Inbox
Join 30,246 other subscribers.
Follow on Social Media
Get the VROOM Podcast