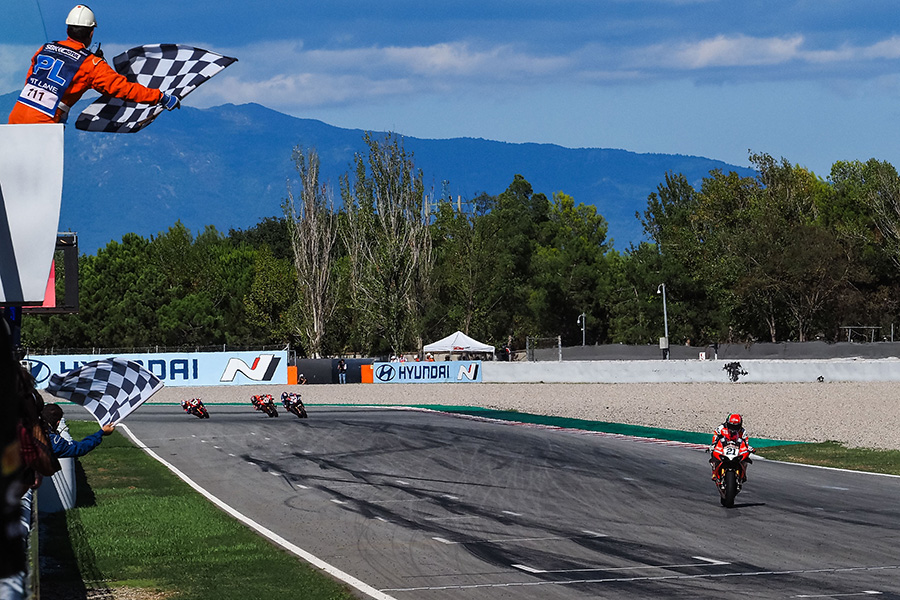 Race 2 for the MOTUL FIM Superbike World Championship at the Circuit de Barcelona-Catalunya was a dramatic encounter with Michael Ruben Rinaldi (Aruba.it Racing – Ducati) claiming victory after a long battle with Toprak Razgatlioglu (Pata Yamaha with Brixx WorldSBK) reclaimed the Championship lead by a single point with second place.

The Red Flags were thrown on Lap 2 of the 20-lap race following an incident involving Lucas Mahias (Kawasaki Puccetti Racing) and Tom Sykes (BMW Motorrad WorldSBK) at Turn 1. Sykes was taken to the medical centre for a check-up following the crash but was conscious. He was diagnosed with a head injury and concussion and transferred to Catalunya Hospital for further assessments.

The new race distance of 19 laps got underway with Rinaldi a fast starter as he moved into the lead of the race ahead of Razgatlioglu (and Jonathan Rea (Kawasaki Racing Team WorldSBK). Razgatlioglu was able to go with Rinaldi throughout the 19-lap encounter but Rea started to drop back. Razgatlioglu and Rinaldi pulled away from Rea with Rinaldi. The Turkish star was able to pass Rinaldi to take the lead of the race, but this lasted for just a handful of laps as Rinaldi responded into Turn 1 with a handful of laps remaining, before extending his lead.

With Rea battling to stay on the podium, he had to fight to keep Andrea Locatelli (Pata Yamaha with Brixx WorldSBK) behind him but his attempts proved to be in vain with the Italian rookie getting past on lap 10 before Scott Redding (Aruba.it Racing – Ducati) and Alvaro Bautista (Team HRC) followed him through. At the start of Lap 18, Redding made a move on Locatelli into Turn 1 for third place with Redding using the SC0 tyre, along with Rinaldi, while his rivals were on the SCX tyre. Bautista followed Redding through a lap later at the same corner. It meant Rinaldi claimed his first win since the Tissot Superpole Race at Misano, and the first time Rinaldi, Razgatlioglu and Redding shared the podium. Bautista just missed out on a podium place with fourth place, with Locatelli in fifth.

FIM Supersport World Championship action came to a thrilling conclusion at the Circuit de Barcelona-Catalunya for the Hyundai N Catalunya Round as Manuel Gonzalez (Yamaha ParkinGo Team) claimed an incredible victory by just 0.021s ahead of Raffaele De Rosa (Orelac Racing VerdNatura) in Race 2, while Niki Tuuli (MV Agusta Corse Clienti) ensured all three manufacturers were represented on the podium.

Turkish star Can Öncü (Kawasaki Puccetti Racing) was the big mover in the early stages of the 18-lap battle as he made moves on Randy Krummenacher (CM Racing) and Gonzalez to take the lead of the race after starting from tenth place. The move for the lead came at the start of Lap 4 as he passed Gonzalez on the brakes into the right-hander of Turn 1.

As Lap 6 started Krummenacher and Öncü got as close as they could which slowed the pair down int Turn 1, allowing Gonzalez to reclaim the lead of the race with Krummenacher passing Öncü as well. A lap later and De Rosa was through on Öncü as well as Krummenacher to move into second place. Öncü’s fight for the podium came to an end on Lap 8 at Turn 5 as the Turkish rider came off his bike, re-joining the race down in 29th place and then bringing his bike back to the pits.

Öncü’s incident allowed the lead group to fracture out a little bit but there were still four riders battling for the race win, with De Rosa able to get alongside Gonzalez lap after lap but Gonzalez able to defend the position on the brakes. On Lap 13, De Rosa made a move stick on Gonzalez at Turn 4 to take the lead of the race, with Krummenacher and Tulli still in the fight for the podium. Gonzalez lost time at the start of Lap 14 as he ran wide at Turn 1 and fell behind both Krummenacher and Tuuli but remained in the lead group although moved back in the podium places on the following lap with a move on Finnish rider Tuuli. Gonzalez recovered from running wide as he passed Krummenacher for second before setting his sights on De Rosa. On the last lap, Gonzalez made his move for the race win and despite the Italian’s best efforts he was unable to re-take the lead.

It meant Gonzalez claimed his second WorldSSP victory and his fifth podium in WorldSSP while De Rosa came home in second place behind Gonzalez, his second podium of the Catalunya Round; just 0.021s behind Gonzalez as they crossed the line. Tuuli claimed his first podium since Magny-Cours 2017 with third place after a Krummenacher save on the final lap; just 0.074s between the top three.

The final race of the FIM Supersport 300 World Championship’s visit to the Circuit de Barcelona-Catalunya was a record-breaking race as Bahattin Sofuoglu (Biblion Yamaha Motoxracing) claimed victory by just 0.003s in Race 2 for the Hyundai N Catalunya Round, fending off Alvaro Diaz Cebrian (Arco-Motor University Team) in a drag race to the line.

The top five in the race were able to break away from the chasing pack in the first half of the race although as the second half of the race the secondary group was able to close the gap with a group of around 20 riders fighting for podiums and the race victory. With a few laps to go, Diez Cebrian made a move for the lead but was overhauled by Sofuoglu heading into the final lap, with the Turkish star claiming his first victory since the 2020 Teruel Round.

Diaz Cebrian claimed his first WorldSSP300 podium with second place and missed out on a sensational victory by the narrowest of margins, while Samuel Di Sora (Leader Team Flembbo) claimed third place as he returned to the rostrum. The French rider had been leading in the closing stages but finished in third place, just 0.096s from Sofuoglu. Di Sora was the lead Kawasaki rider in the race with his podium finish enough for Kawasaki to claim the Manufacturers’ Championship with four races to spare.

Adrian Huertas (MTM Kawasaki) missed out on a podium place by four tenths but fourth place for the Championship leader meant he was able to extend his Championship lead over Tom Booth-Amos (Fusport – RT Motorsports by SKM – Kawasaki) after the British rider was declared unfit for Race 2 following a Race 1 crash, with Huertas extending his lead over Booth-Amos to 43 points.

#CatalanWorldSBK
Get All Our Latest News Sent Direct To Your Inbox
Join 30,253 other subscribers.
Follow on Social Media
Get the VROOM Podcast