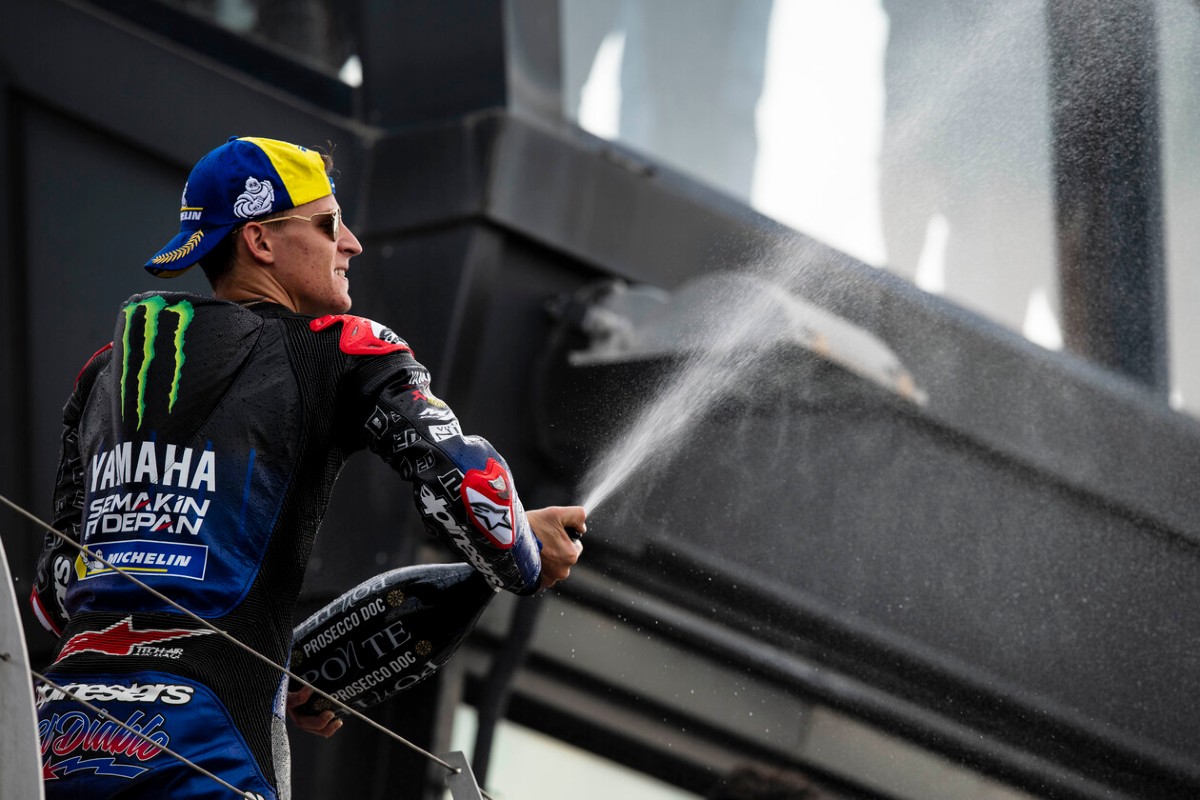 Monster Energy Yamaha MotoGP‘s Fabio Quartararo had motorsports fans on the edge of their seats until the very end of the Gran Premio di San Marino e della Riviera di Rimini. He piled on the pressure but came just 0.364s short of a win. Still, his superb second place shows the championship leader can never be ruled out. The fans at the Misano World Circuit Marco Simoncelli were also thrilled to see Franco Morbidelli back in action after a long rehabilitation period. He went the distance and ended his first race on the Factory Yamaha in 18th place.

Quartararo had a strong start and snaked through the first corners in second place before settling in third. The opening two laps were filled with confrontations between the Yamaha man and Jorge Martin. El Diablo was not planning to relinquish his third place and with Martin crashing out on lap 3, the Frenchman could concentrate on his chase to the front.

The number-20 rider gradually closed the gap to Jack Miller. Matching the pace of front runner Francesco Bagnaia, it was only a matter of time before he would be able to put in a bid for second place. A mistake by Miller with 20 laps to go sped up the process. Setting multiple red sectors, Quartararo had his first opportunity in turn 6 six laps later, and he didn‘t think twice about grabbing it with both hands.

Quartararo had a nearly 3-second gap to Bagnaia, but is famously no slouch. He was steadily making up time, inching closer lap by lap, and with four laps to go the deficit was down to 0.6s. There was a clear pattern: the Yamaha was strongest in sector 1 and 4, but the race leader had the advantage in sector 3. Quartararo fought tooth and nail, coming as close as 0.151s but ultimately had to settle for second, with a 0.364s gap over the finish line. With 19 premier class podiums to his name, Quartararo is now the most successful French rider in history.

Morbidelli started from 16th position on the grid and found himself in the busy mid-pack through the first corners. He dropped back to 20th after the opening laps before he got into a steady rhythm. He gained a few positions due to riders crashing out or retiring from the race, but he also lost places in battles with Danilo Petrucci, Valentino Rossi, and Luca Marini.

The second half of the race was a lonely but productive ride for the number-21 rider. After missing five consecutive Grand Prix events, he is eager to make kilometres on the bike again. Despite his leg not being completely healed, he was able to find a solid rhythm and complete the full race length. Overtaking Marini again on the last lap, he scored 18th place on his Factory Yamaha debut, 36.272s from first.

After today’s results, Quartararo’s lead in the championship stands at 48 points, with a 234 points total. His new teammate Morbidelli remains in the 17th spot in the rankings with the 40 points he scored in the first eight rounds. Monster Energy Yamaha MotoGP stay in first place in the team standings with 329 points and Yamaha holds second in the constructor championship with 262 points.

The Monster Energy Yamaha MotoGP Team will be back in action in Misano on Tuesday and Wednesday for the Misano MotoGP Official Test. After that they will be racing again in two weeks‘ time at the Circuit of The Americas in Austin, Texas.

I was thinking about overtaking Pecco on the last lap, but he did an amazing race. I tried everything. To be honest, today I even forgot mostly about the championship. I had some moments with the front, it was close to being a zero today, but in the end a score of 20 here in Misano is very positive. I can’t wait to be back the day after tomorrow for the test. We have some interesting things to do. I have nearly a two-race-wins advantage with four races to go. I think that’s quite nice. I’m so happy about that, and you can imagine how happy I am that it stayed dry. I feel so good. Last year, my weak point was that I was thinking too much about the championship, but today it was the opposite: I didn’t think about it enough. I was super on the limit and I’m happy. My dad said after the finish that I rode like a champion today, which I really appreciated. Let’s see what we can do in Misano 2. I think that will be fun, because this was one of the most fun races I ever did. My pace was so strong, and I came so close. I will give it another try in Misano 2.

It was tough, but anyway it was nice to get back to racing. I had a good start, and it was nice to stay in the pack for a few laps. I enjoyed it and it was the right thing to do. This morning I wasn’t thinking that it was possible to face this race because I was struggling a little bit with the leg. But with some pain killers and adrenaline, I managed to do the whole race and also be quite consistent. I understood a few things about the bike, so this is positive, and I’m really happy to be back. It will be very important to keep improving the setting of the bike, my feeling on the bike, and try some new items as well, so the Misano test will be really important. It’s great, and I’m happy to do it.