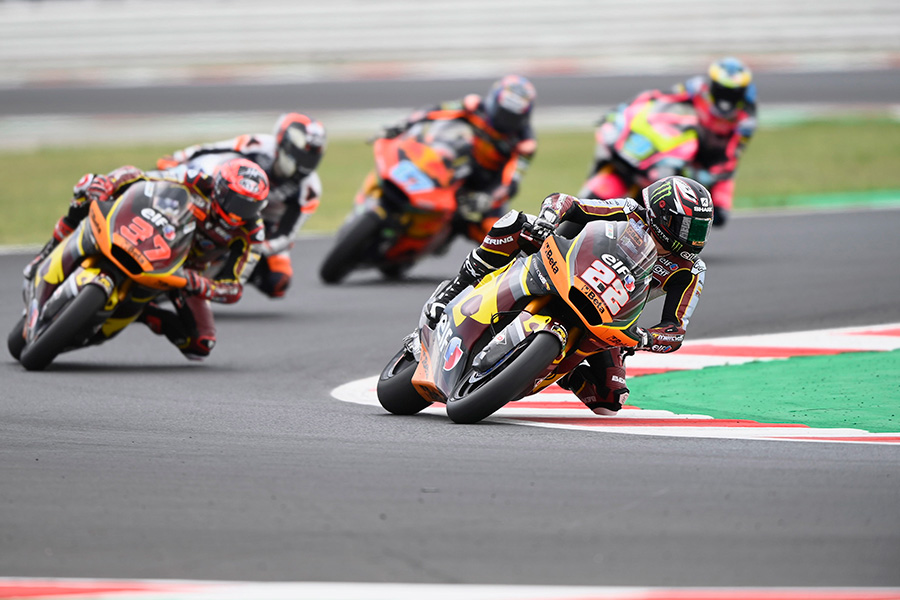 The Moto2 field was handed a challenge at the 14th round of the 2021 season, as rain in both of Friday’s sessions meant riders had just two full sessions – FP3 on Saturday and warm-up on Sunday – to work on dry settings ahead of the 25-lap race.

Elf Racing Marc VDS Racing Team riders Sam Lowes and Augusto Fernandez had to contend with temperatures of 27 degrees as they both fought hard in battles for first and fifth place respectively.

Fernandez had hopes of challenging for victory after qualifying third – his first front row start since the Japanese Grand Prix in 2019 – and then topping morning warm-up. But a tough first lap saw him drop four places to seventh.

Some issues with rear grip meant Augusto couldn’t run with the leading quartet, and instead contested fifth place with three other riders. A nice pass on Xavi Vierge on the 20th lap was enough for sixth.

Augusto’s ninth top 6 finish of the year places him sixth in the championship with 118 points, one behind Aron Canet in fifth.

Augusto Fernandez
“Today I didn’t feel good and lacked the rear grip. We think we had some problems with the rear tyre. But we managed to save some good points and we still finished in the top six and minimized the damage for our fight in the championship. Let’s keep going. It was a good weekend, one of the best of the season. We are still in good form so let’s go again in Austin. It will be hard because it’s a new track for me but we will try to make a good result there.”

For the second race in succession, Sam Lowes enjoyed another excellent getaway from the middle of the front row, and led the Moto2 field at the end of the first lap.

The 31-year old was engaged in a race-long fight with Raul Fernandez, Aron Canet and Remy Gardner. Despite dropping to fourth on lap 17, Lowes fought until the end, posting his fastest time of the race on lap 19 and came home just 1.5s behind the race winner.

This fourth place consolidates Lowes’ fourth place in the championship with 140 points, 50 behind Marco Bezzecchi.

Sam Lowes
“I’m happy with that race. I was good in the first laps but then struggled a bit for rear grip, it wasn’t the same as in warm-up. But I could see the other guys struggling, too. Overall, I’m really happy after last week. It was really important to finish the race. But now we can be positive and we go to Texas – a track that I like. We lacked a bit of dry track time this weekend and I honestly thought I was missing in pace so it felt good to be only 1.5s behind the winner. It feels like I can take the positives and go to the next one in a good way. I want to say thank you to the team because they improved the bike when stopping in neutral corners. It was nice to be in Misano and to see all the fans again. We’ll keep working to get back on that podium – it’s getting closer!”