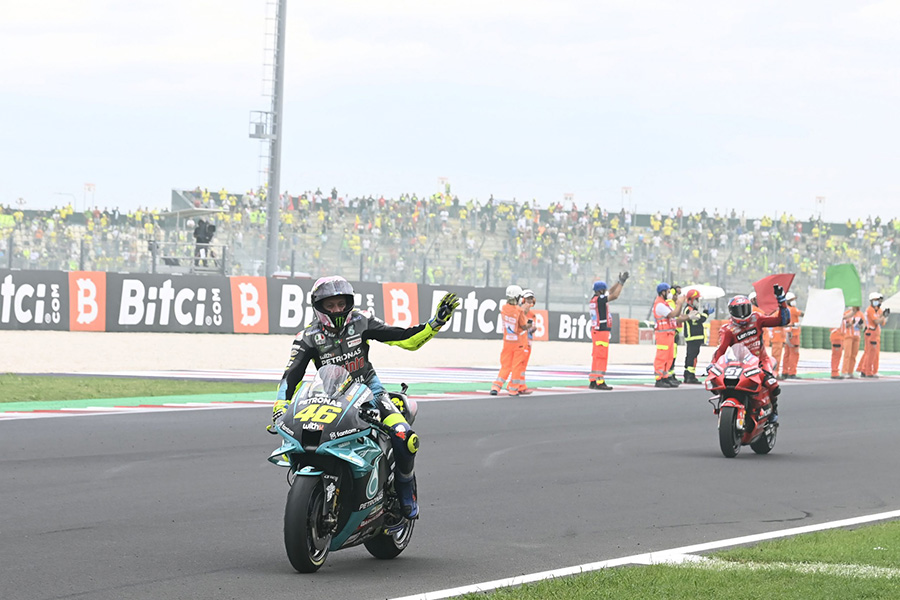 Rossi, who lined up 23rd on the grid for his home race, had a poor getaway off the line and had to spend the opening couple of laps catching the main field. After gaining two places early on, the Italian was able to settle into a good rhythm and started making progress in closing down those riders ahead. Moving into 17th on lap 18, Rossi was unable to further reduce the on track deficit in the closing stages and maintained this position at the end of the SanMarinoGP. He holds onto 21st in the World championship with 28 points.

New team-mate and fellow countryman Dovizioso had a good start to his debut race as a PETRONAS Yamaha SRT rider and was able to stay in touch with the riders ahead of him in the opening laps. Unfortunately, the Italian was handed a long lap penalty for exceeding track limits at the halfway point of the race, which prevented him from being able to stay with the main field. At the end of the 27 laps, Andrea ended his home GP – and first MotoGP race in nearly ten months – in 21st place.

After two back-to-back GPs the work continues for PETRONAS Yamaha SRT, who will stay at the Misano World Circuit Marco Simoncelli for a two-day MotoGP test (21-22 September).

The crash yesterday meant that I started the race today from 23rd, which was a problem. In the first corner I was able to recover some positions, but then in Turn 4 there was some contact and I had to go off track, which put me last. After that I tried to push, my pace was decent and I was able to complete some overtakes. It’s a shame that it wasn’t enough to earn some points. After the flag it was really nice with the fans, a really emotional moment for me, and I enjoyed being able to do a lap of honour. We have a test this week, so we will try the tyres and see what we can improve with the setting. After that we go to Austin, which was a great race for me last time, and we will see what our potential can be there.

It was a really strange experience to start the race from 24th, but it was good because we wanted to be consistent throughout the race and learn, which is what we did. Unfortunately I had to do a long lap penalty and I lost the group, but after that I was able to play a little and understand more things. I’m happy with that and also that my best lap of the race was towards the end, plus it wasn’t a bad lap time. I felt a lot of good things from the bike at this point, but we need to work together to analyse why it happened then to make sure I can feel that at the beginning of a race as well. I’m happy that I will get two days of testing this week and I hope that the weather will be good for it.

#SanMarinoGP, Valentino Rossi
Get All Our Latest News Sent Direct To Your Inbox
Join 30,271 other subscribers.
Follow on Social Media
Get the VROOM Podcast