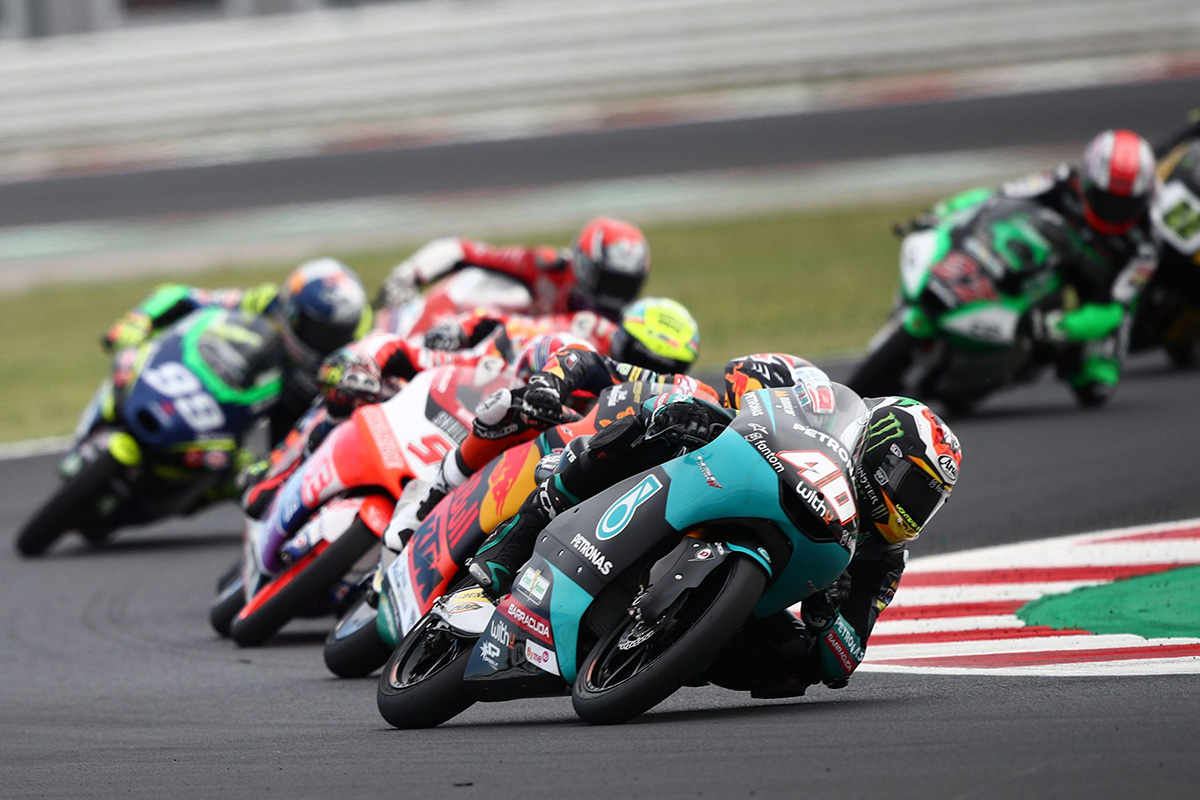 Despite battling pain, Darryn Binder was able to make his way through the field to claim sixth place at the end of the Moto3 race at Misano, while PETRONAS Sprinta Racing team-mate John McPhee ended the Gran Premio di San Marino e della Riviera di Rimini inside the points in 13th.

An aggressive start from 14th on the grid saw Binder claim five places in as many corners, before moving into seventh by the second lap. Staying inside the leading group and battling hard with those around him, the South African was in contention for the podium, having moved into third with nine laps to go. Feeling the effects of his crashes from Friday and yesterday in the closing stages, Darryn was unable to stay with the leading group and ended the race sixth. He now sits seventh in the championship with 114 points.

Team-mate McPhee, who started the race 19th, had a poor start and found himself down in 23rd on the second lap. The Scot made steady progress through the field to move into the points – 12th – by the mid-point, and set his sights on closing the gap to the top-ten. Despite encountering an issue with the rear brake in the final ten laps, John was still able to cross the line 13th. Increasing his world championship points to 56, McPhee is 16th in the riders’ standings.

PETRONAS Sprinta Racing will now turn their attention to the first ‘overseas’ round of the year since the DohaGP: the Grand Prix of the Americas (1-3 October).

It’s been a difficult weekend for me, as I had a really big crash in FP2 and that left me feeling terrible yesterday. I wasn’t able to qualify very well and I was still struggling in Warm Up this morning because of it. I gave it everything I had to get to the front at the start of the race and I felt strong. I was fighting for the podium positions, but with five laps to go I couldn’t block out the pain anymore. It was difficult to keep concentration in those last laps, I was making silly mistakes, and I just couldn’t hang onto the back of the group anymore. I still managed to finish sixth, which is good, and I had good pace at the beginning of the race. I’ve got to take the positives with me as I go home to recover, and come back stronger in America.

It was a tough race today and the pace at the front was really fast. I felt quite good on the bike and was able to have a decent rhythm, but the biggest issue was making my way past the other guys. When I was able to get to the front of my group, I was closing the gap to those ahead. Lap-by-lap I was getting there, but then ten laps before the end I had a moment and the rear brake broke. It wasn’t enough to make me retire, but it made it a tricky finish to the race. It was good to still score some points and we’ve learned a lot from this. I’m looking forward to getting to Texas, but I’m also looking forward to being back here in a few weeks.