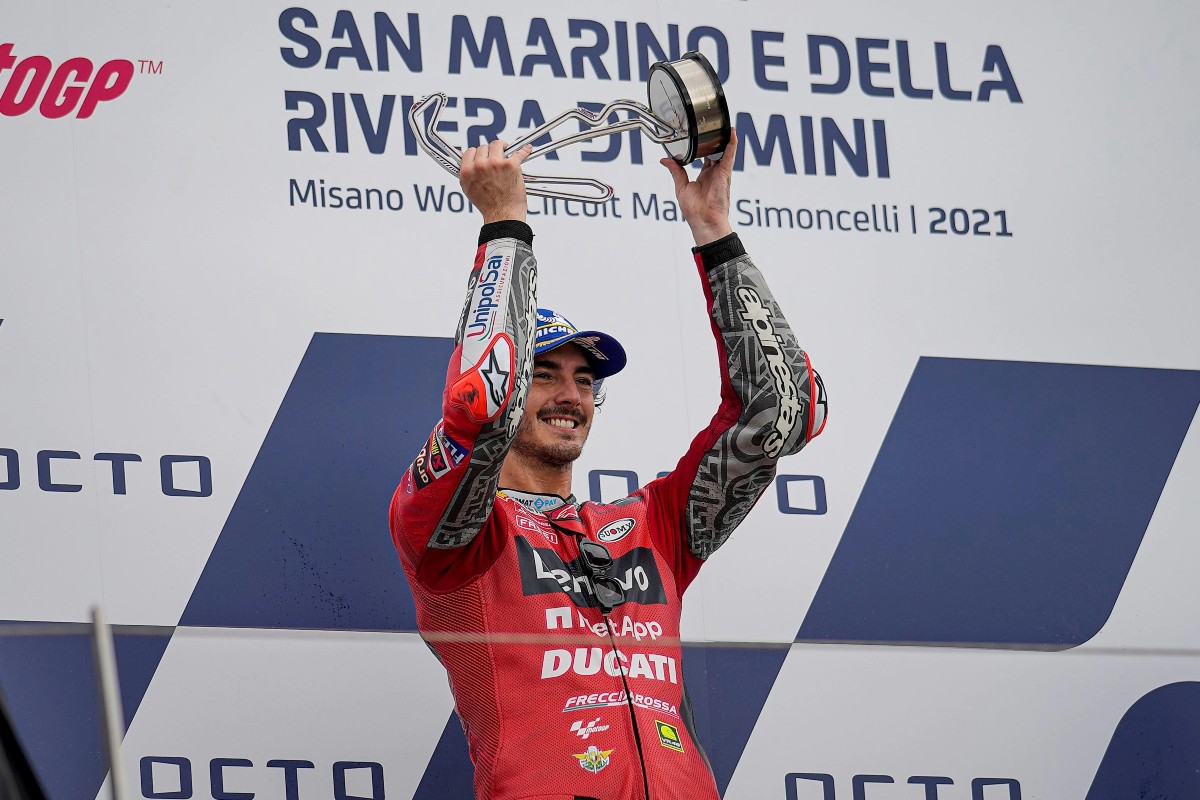 Just seven days after his extraordinary victory at the Aragon GP, Pecco Bagnaia once again took the top step of the podium at his home Grand Prix, held this afternoon at the Misano World Circuit “Marco Simoncelli”, in front of 25’000 spectators. It was another perfect weekend for the Ducati Lenovo Team rider, who took his second consecutive win in the premier class after dominating Saturday’s qualifying and today’s race.

As he started the race from pole, the Italian rider took the race lead immediately after the start, imposing a very fast pace and managing in a short time to secure a gap of over a second on his rivals. In the second part of the race, Quartararo took second place and started to get closer to Bagnaia, managing to reduce the gap to just a few thousandths of a second. Still, Bagnaia continued to ride perfectly, holding on to first place until the chequered flag. Enea Bastianini, rider for the Ducati team Esponsorama Racing, also did an outstanding performance in today’s race scoring his first MotoGP podium at the end of a masterful race that saw him recover from twelfth on the grid to third place.

It was a less fortunate race for teammate Jack Miller. The Australian rider, who started second on the grid, made a good start to maintain the position behind Bagnaia. However, after the first half of the race, Miller started to feel a vibration on the rear that did not allow him to maintain the same pace. After being overtaken by Quartararo and Bastianini, the Ducati Lenovo Team rider tried to keep his advantage over his rivals but was eventually overtaken by Marc Márquez at the line, finishing the race in fourth.

After today’s race, Bagnaia, second in the overall standings, shortens the distance to 48 points on Quartararo, while Miller remains in fifth place with 140 points. Ducati is first in the Constructors’ Championship, while the Ducati Lenovo Team is second in the teams’ classification.

It was another perfect weekend! It wasn’t an easy race at all: Quartararo was really strong towards the end, but I tried to stay consistent as much as possible. To get another win was important, and to do it here at my home track, in front of so many fans and those who love me, was even more special. Now we won’t have much time to celebrate: Tuesday and Wednesday, we’ll be back on track for two days of testing, but for now, I want to enjoy this success.

Unfortunately, after a good start, I started to feel some vibrations in the rear that didn’t allow me to maintain the same pace until the end. It’s a shame because I felt really comfortable when I was second behind Pecco in the first few laps and could pull in a gap on my rivals. Then, after the first part of the race, I started to suffer because of these vibrations. I ended up wide and tried my best not to lose too many positions. Now we try to move on and concentrate on the two days of testing that we will have here at Misano on Tuesday and Wednesday. Congratulations to Pecco for another extraordinary victory.

As I am not riding in MotoGP full time, I lacked a bit of pace today. I used a tyre that was too soft in the race, and when it started to drop, I was forced to slow down after taking a few risks. Anyway, I had a lot of fun, and I am really happy for Bagnaia! Our package proved to work well! I hope to get a better result when I race here again in October in the Emilia Romagna and Made in Italy GP. I want to thank Ducati and the Ducati Test Team for their support this weekend.