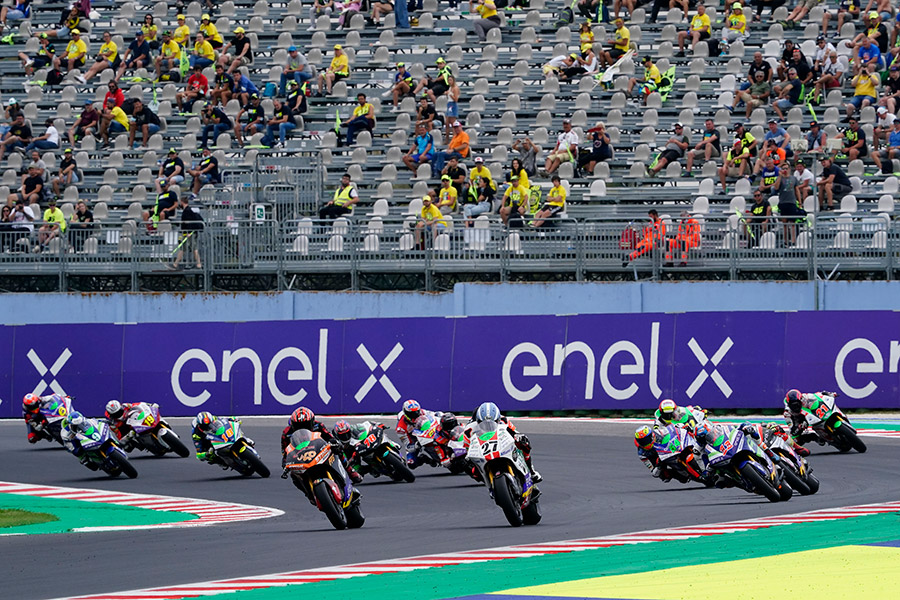 The final race of the 2021 FIM Enel MotoE™ World Cup had everything on the line. On the way in, Jordi Torres (HP Pons 40) had eight points in hand over Dominique Aegerter (Dynavolt Intact GP), and the two at the top in the standings would also prove the key protagonists in the drama. After an almighty duel between the duo, with the crown on the line, the contest ended in contact as Aegerter dived up the inside. Torres fell, although he remounted, and in parc ferme the verdict from the Stewards was in: Aegerter was given a Ride Through penalty, or the equivalent time, which was 38 seconds. That put him just ahead of Torres after the Spaniard made it to the line.. which wasn’t enough for the Swiss rider. So it’s #TwoTimeTorres at Misano.

That drama also decided the podium, with what had been a fight for third becoming the fight for victory. And it was King of Misano Matteo Ferrari (Indonesian E-Racing Gresini MotoE) who came out on top, winning the last race of the season to get back on the podium for the first time in 2021 – and extending his record at Misano to 5 wins from 7 races. Mattia Casadei (Ongetta SIC58 Squadra Corse) took second after more impressive speed, the only rider on the rostrum in both races at the season finale, with Miquel Pons (LCR E-Team) rounding out the year in third.

It was Casadei who got the holeshot going into the first corner, with Aegerter attacking Eric Granado (ONE Energy Racing) and Ferrari taking the long way around the outside to jump both and slot into third. He duelled Aegerter briefly, with Granado just behind, as Torres took the lead and then took off in the lead too.

On the second lap, the race leader had begun to open up a considerable gap, jolting Aegerter into action and the Swiss rider moving past Ferrari into P2. He then got the hammer down, and was able to close back up on his race-leading rival.

From there, a duel for the ages erupted as Aegerter threw the kitchen sink at trying to take over at the front, and it was spectacular as the two exchanged the lead. Torres wasn’t backing down and Aegerter was putting it all on the line. But with just a handful of corners to go, it hit boiling point. Aegerter lunged for it, the two made contact, and Torres found himself on the floor… leaving Aegerter free in the lead to cross the line first. The Spaniard managed to remount and finish in P13, but it seemed the Cup was decided.

The incident was immediately put under investigation, however. After a tense wait in parc ferme, a penalty was announced and 38 seconds were added to Aegerter’s race time for irresponsible riding. That’s the equivalent of a ride through penalty in MotoE™ as Misano as per the regulations, and it dropped him to 12th – just ahead of Torres. The Spaniard had, therefore, taken the crown after all.

Behind all that drama for the overall Cup, there was a race to be decided too. The trio who’d been locked in their own battle for much of the race; Ferrari, Casadei and Pons, were on the podium. The Gresini rider was back on top, just ahead of Casadei, with Pons a few more tenths back but the rookie fast once again.

Aegerter was P12 and Torres P13, and with a helping hand from his teammate. Jasper Iwema saw the Spaniard had crashed, waited for him, and followed him home. Every point can count.

In the end, it was a one-point swing as the dust settles, with Torres ending the season seven clear of Aegerter. Ferrari leapfrogged Granado by just two points to take third overall, with Alessandro Zaccone (Octo Pramac MotoE) ending the year in fifth overall after his Race 1 crash and sitting Sunday out. And that’s a wrap on a dramatic, thrilling and truly electric season.