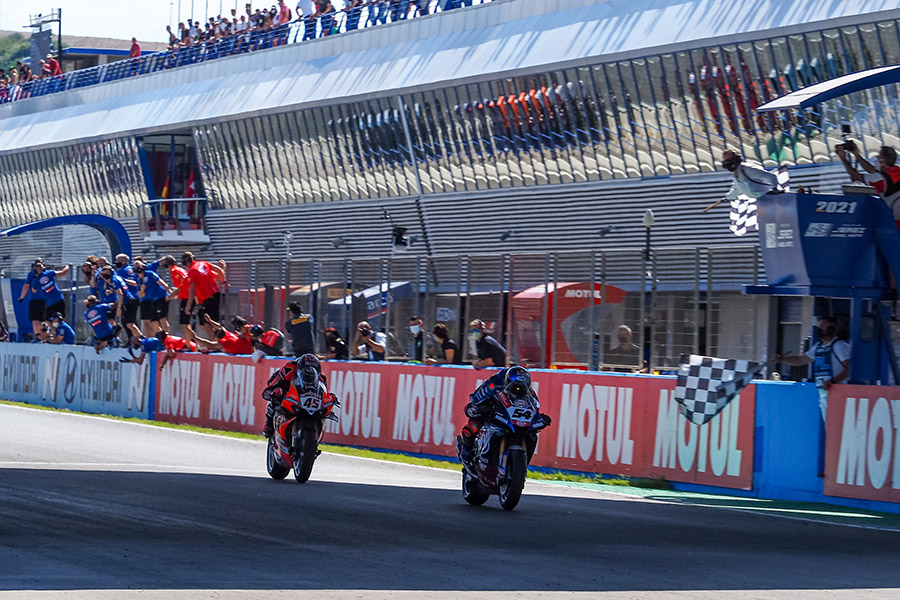 A familiar story to Race 1, with the same outcome but a different opponent for Toprak Razgatlioglu (Pata Yamaha with Brixx WorldSBK) as he claimed his second MOTUL FIM Superbike World Championship victory of the day at the Circuito de Jerez – Angel Nieto for the Motul Spanish Round after a late-race battle with Scott Redding (Aruba.it Racing – Ducati).

Repeating his start from Race 1, Razgatlioglu got a good start to lead into Turn 1 from Jonathan Rea (Kawasaki Racing Team WorldSBK) and, while Rea was able to challenge into Turn 6 on Lap 1, the Turkish star was able to hold on to extend his lead over Michael Ruben Rinaldi (Aruba.it Racing – Ducati), who made a great start to move into podium contention and passed Rea in the opening laps of the 20-lap race.

While Razgatlioglu was able to keep his lead and briefly extend his lead, both Rinaldi and Scott Redding (Aruba.it Racing – Ducati) were closing in. On Lap 6, Rinaldi ran wide at Turn 6 which almost allowed Redding through, but Rinaldi was able to hold on to second place until Turn 13, when Redding made the move for second.

While Redding was putting pressure on, Razgatlioglu held on until Lap 17 when Redding passed Razgatlioglu for the lead but just one lap later Razgatlioglu made a move into Turn 13 to take the lead onto the penultimate lap. Redding kept the pressure on Razgatlioglu throughout the final two laps, but the Turkish star held on to claim his second victory of the day in Jerez, and his tenth of the season while Redding claimed his 30th WorldSBK podium.

Any FIM Supersport World Championship rustiness for Dominique Aegerter (Ten Kate Racing Yamaha) after missing the Catalunya Round was soon shaken off as he claimed victory in the sole WorldSSP race for the Motul Spanish Round, finishing almost ten seconds clear of his rivals at the Circuito de Jerez – Angel Nieto while Yamaha wrapped up the Manufacturers’ Championship for the fifth consecutive campaign.

As the lights went out, Championship leader Dominique Aegerter (Ten Kate Racing Yamaha) got the jump from second on the grid to take the lead of the race while Italian debutant Stefano Manzi (GMT94 Yamaha) made progress off the line as he moved into the top five for his first WorldSSP start. From there, he was unchallenged for race victory went on to win by over ten seconds, with his winning enough to wrap up the Manufacturers’ Championship for Yamaha for the fifth time in a row. Aegerter joins Andrea Locatelli (Pata Yamaha with Brixx WorldSBK) as the only two riders who have taken ten victories in a single WorldSSP campaign, while he now has 12 podiums and sits just one behind Kenan Sofuoglu for the all-time record.

Aegerter was able to break away from the chasing pack by posting a lap record of 1’45.525s on the second lap before lowering it to 1’42.329s a few laps later, extending his lead to Philipp Oettl (Kawasaki Puccetti Racing) by over a second by the third lap. The win for Aegerter means he extends his Championship lead to 62 points over title rival Steven Odendaal (Evan Bros. WorldSSP Yamaha Team), with the South African rider finishing eighth; Odendaal making a mistake on Lap 2 at Turn 13 and dropping down the order.

The battle for the podium raged on throughout the 17-lap encounter with Oettl being hounded by Spanish sensation Manuel Gonzalez (Yamaha ParkinGo Team) chasing the German down throughout the race. Gonzalez was unable to make his move in the first half of the race which allowed finish rider Niki Tuuli (MV Agusta Corse Clienti) to close in, applying the pressure to Gonzalez as he chased another podium finish. Tuuli made the move at Turn 13 on Lap 9 to move into third and soon set his sights on Oettl after the battle with Gonzalez allowed the German to break away. Oettl claimed second place ahead of Tuuli in third place, with Gonzalez unable to respond and finished fourth; Oettl’s podium the 150th podium placement in WorldSSP.

The FIM Supersport 300 World Champion race on Sunday at the Circuito de Jerez – Angel Nieto with a race that could have huge Championship implications and twists as Bahattin Sofuoglu (Biblion Yamaha Motoxracing) took a commanding victory for Race 2 of the Motul Spanish Round while Championship leader Adrian Huertas (MTM Kawasaki) crashed out and saw his Championship lead cut.

Huertas got the jump at the start to take the lead as he looked to wrap up the Championship in Race 2 but the Spanish rider ran wide at Turn 6 and dropped from the lead group down into around 14th before he started fighting his way back through the field, before the same issue happened again a couple of laps later and dropped him down to 19th, before Huertas was involved in an incident with Samuel Di Sora (Leader Team Flembbo) at Turn 6 which forced the Championship leader out of the race; the incident to be investigated after the race by the FIM WorldSBK Stewards.

The first incident allowed Turkish star Bahattin Sofuoglu (Biblion Yamaha Motoxracing) to take the lead of the race and at around the halfway stage of the race, he tried to open up the gap at the front of the field so he could claim his second victory of the season, which he duly did so ahead of Iñigo Iglesias (SMW Racing) in second place, who gained who crossed the line in fourth place but gained two positions when Yuta Okaya (MTM Kawasaki) and Jeffrey Buis (MTM Kawasaki) were demoted one place for exceeding track limits on the final lap. Okaya claimed third place ahead of teammate Buis, whose fourth place coupled with Huertas’ non-score means the title battle will continue into the season finale in Portimao in just one week, with the gap just 36 points in favour of Huertas.

#ESPWorldSBK
Get All Our Latest News Sent Direct To Your Inbox
Join 30,253 other subscribers.
Follow on Social Media
Get the VROOM Podcast