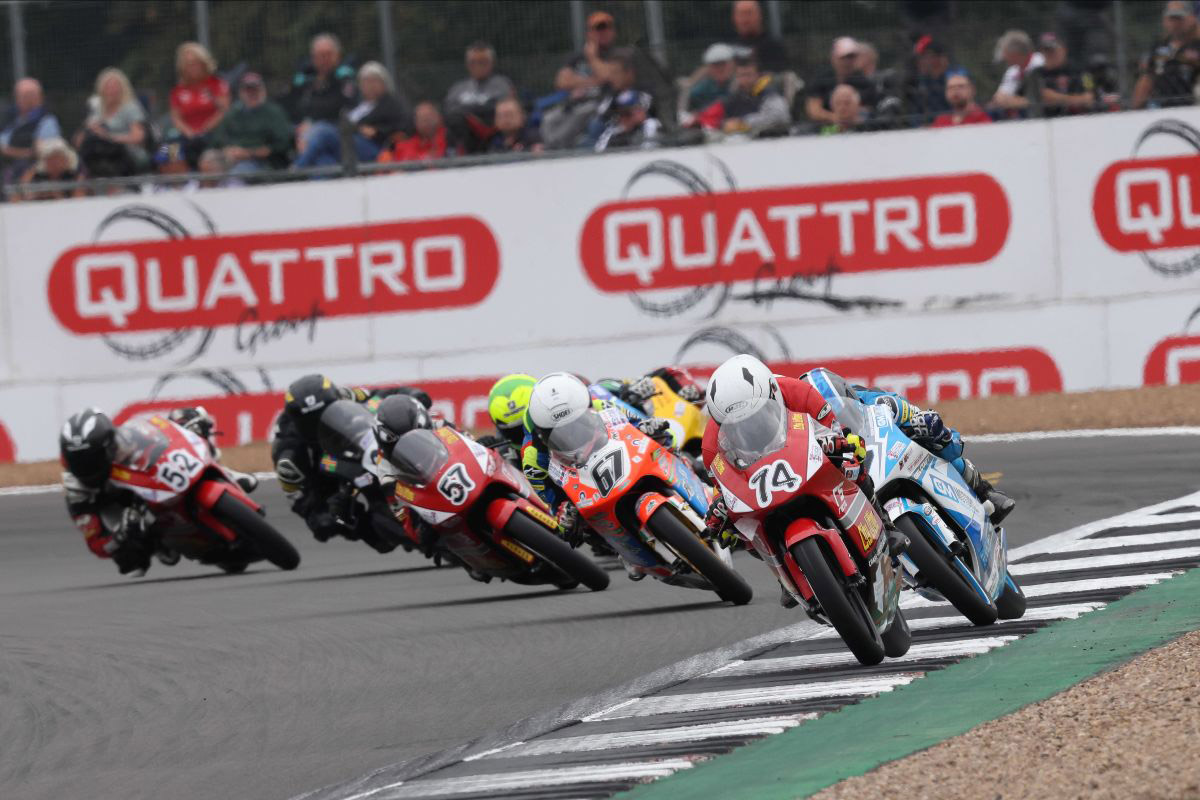 After a stunning rollercoaster of a season, the time has come to decide the winner of the 2021 Honda British Talent Cup, with the final 50 points on the table at the season finale. A host of fast faces remain in contention for the crown, and one race on Saturday and one on Sunday are all that remain for the class of 2021… with everything set to be decided at the classic Donington Park Grand Prix circuit.

Brown was on a run of consistency that outscored Belford’s, gaining ground, before a dramatic penultimate round saw the number 74 take over on top. Belford’s DNF in Race 1 at Silverstone was therefore a costly one and just at the wrong time, and it also saw O’Gorman tangled up, ending the number 67’s run of firsts or seconds since his return from injury. Another drama-filled Race 2 then saw Brown win, Belford only take eighth and O’Gorman end up off the podium for the first time since his return, although it was some solid damage limitation for the 52 and 67 after starting so far back on the grid. With Garness back on the rostrum to keep his hopes alive as well, it was a shuffle that leaves the standings so finely poised… and it really could be anyone’s game!

Form this season has seen the key contenders all consistently quick but last season at the Grand Prix layout, Belford was the top finisher of those who return in 2021, taking a second place. O’Gorman took a third and a fourth though, showing good speed at the venue. James Cook (Wilson Racing) had some pace too, and he may be out of contention for the crown but he could still make life difficult for those fighting for the podium. Can the veterans make experience count? Or will Brown’s momentum on the way in make it just another venue and another classic group fight at the front, regardless of the 2020 form book?

There’s plenty at stake a little further off the top too. Ollie Walker (Moto Rapido / SP125 Racing) taking that maiden win has put him in sixth and a few points ahead of Cook, with Harrison Crosby (Banks Racing) for close company too. Then comes Sullivan Mounsey (iFord Lloyd & Jones), and he’s fresh from his best weekend yet – a first podium followed by a stunning slice through the field from the very back into the leading group. There are no nerves or maths for those outside the top five to try and combat in terms of winning the Cup outright either, so they’ll be gunning hard to round out the year as far forward as possible. Can they make life difficult for those just ahead of them in the standings?

Five contenders, fifty points, and the stunning Donington Park Grand Prix Circuit await. Only one rider can be crowned the 2021 British Talent Cup Champion, but it will be another fantastic battle in the season finale regardless. Tune in for Race 1 at 14:00 (GMT +1) on Saturday, before 11:15 sees the lights go out for the last race of the season on Sunday.