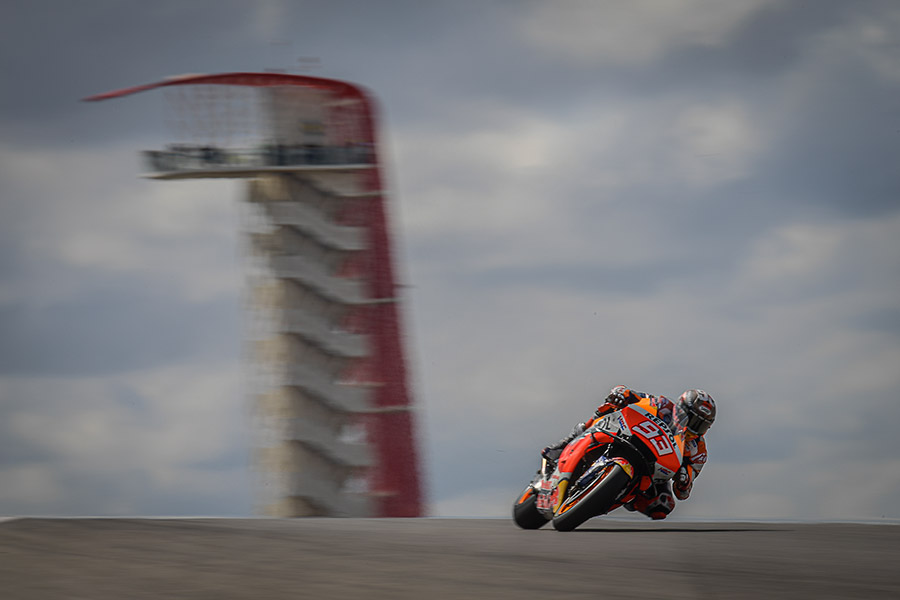 Fastest in the wet, fastest in the dry: Day 1 at the Red Bull Grand Prix of the Americas firmly belonged to Marc Marquez (Repsol Honda Team). It’s a familiar story for a Friday at COTA, but the lead up to the event has been anything but for the number 93. Still his speed at the venue impresses, but Ducati Lenovo Team’s Jack Miller was a very close second and Marquez’ 2:04.164 only gave him an advantage of 0.015 over the Australian’s effort. Miller was within just over a tenth and a half in the wet too. World Championship leader Fabio Quartararo (Monster Energy Yamaha MotoGP) claimed third, a little further back, but a lone star for Yamaha in a top eight populated by Ducati and Honda.

Marc Marquez started the day off on top, a 2:15.872 in the damp conditions enough to deny Miller by 0.167s. Johann Zarco (Pramac Racing) rounded out the top three, fresh from arm pump surgery and back up at the sharp end.

Miguel Oliveira (Red Bull KTM Factory Racing) and Pol Espargaro (Repsol Honda Team) were the only other two riders to get within a second of Marquez’ pace in the opening 45-minute stint as a dry line started to form at the end of the session, with Alex Marquez (LCR Honda Castrol) and 2019 winner Alex Rins (Team Suzuki Ecstar) next up.

Second in the Championship, Francesco Bagnaia (Ducati Lenovo Team), claimed P8, 1.4s off Marquez, with World Championship leader Fabio Quartararo struggling in the mixed conditions – it was P15 for the Frenchman…

Takaaki Nakagami (LCR Honda Idemitsu) was the sole crasher, a lowside at the end of the session at Turn 15.

Dry conditions and sunnier skies greeted the premier class riders in the afternoon, setting the grid up for a crucial 45 minutes. Wet weather is forecast to disrupt qualifying day, so FP2 could well decide who is heading into Q2 automatically.

Immediately, Captain America set the pace. Six-time COTA winner Marc Marquez was half a second clear of Miller after 20 minutes of dry track time, with just seven riders within a second of the number 93 in the early stages. Miller then cut Marquez’ advantage to 0.123s with just under 15 minutes to go, as soft tyres were then fitted for a mini Friday afternoon qualifying sprint.

Bagnaia and Nakagami were the first riders to beat Marquez’ time, the Japanese rider the faster of the two, as Miller then went P2 ahead of teammate Pecco. An Aleix Espargaro (Aprilia Racing Team Gresini) crash at Turn 18 and an Oliveira tumble at Turn 12 then brought out the yellow flags for a brief period, meaning plenty of lap times were cancelled – although both riders were ok.

Quartararo then shot to P1 by over two tenths before Marc Marquez – after slipping to the lower ends of the top 10 – returned to the top with another benchmark. Miller threatened to take top spot but the Aussie’s final lap was just shy and truly only just – leaving only 0.015 separating the duo at the end of play.

Behind Marquez and Miller comes Quartararo overall, and then it’s another double Honda threat as Pol Espargaro takes P4 and Nakagami rounds out the top five.

Bagnaia is in the mix in P6, the Italian just under half a second away from Marquez’ time, with Pramac Racing pair Jorge Martin and Johann Zarco seventh and eighth respectively. 2019 Austin winner Rins and Misano podium finisher Enea Bastianini (Avintia Esponsorama) complete a top 10 covered by 0.6.

Brad Binder (Red Bull KTM Factory Racing) is the man in 11th by just 0.016, and with rain very possible for FP3, that could be a crucial couple of hundredths. Reigning Champion Joan Mir (Team Suzuki Ecstar) is in P13 for the moment too, and Aleix Espargaro finds himself down in P19.

Andrea Dovizioso (Petronas Yamaha SRT) was notable on Day 1 in a slightly different way, the Italian the second Yamaha in P14 as he continues to make progress on his new, 2019 M1.

Raul Fernandez and Championship-leading teammate Remy Gardner made it another Red Bull KTM Ajo 1-2 on Friday at the Red Bull Grand Prix of the Americas, the rookie sensation two tenths clear of the Aussie veteran… and the duo with a nice buffer in hand over Sam Lowes (Elf Marc VDS Racing Team) in third. Business as usual? It may be and in the best way, with the two seeming set for another awesome showdown at COTA.

It was a damp start to FP1 with Somkiat Chantra (Idemitsu Honda Team Asia) and Fermin Aldeguer (MB Conveyors Speed Up) enjoying some headlines, but by the end Raul Fernandez had got himself acquainted with the Circuit of the Americas on a Moto2™ bike and the Spaniard beat Bo Bendsneyder (Pertamina Mandalika SAG Team) by 0.197s. Fernandez’ 2:13.589 was set on slicks, the early morning rain clearing to allow the field to push, with American Racing’s Marcos Ramirez claiming P3.

There were no crashes, but there were a couple of technical gremlins for Jorge Navarro (MB Conveyors Speed Up).

Right from the get-go in the dry, Raul Fernandez was the pacesetter. The Spaniard sat 0.7 clear of the chasing pack with just under 30 minutes of FP2 to go, and it wasn’t until Lowes briefly went top in the final 10 minutes that there was a real challenge to his dominance. On his next flying lap, however, the number 25 went back to 0.6 clear of Lowes, setting down another marker.

Gardner shaved Fernandez’ advantage down to 0.199s, but that’s as close as anyone got on Day 1. Lowes is another four tenths down on Gardner, with rookie Tony Arbolino (Liqui Moly Intact GP) a fantastic fourth, 0.7 away from P1.

Misano podium finisher Aron Canet’s (Inde Aspar Team) 2:10.709 put the Spaniard in P5 on his first visit to COTA on a Moto2™ machine, with Augusto Fernandez and Simone Corsi (MV Agusta Forward Racing) the only other two riders – in P6 and P7 – to get within a second of Fernandez…

Navarro suffered another technical in the afternoon, but there were no other incidents.

With the conditions so much better in the afternoon, the FP2 timesheets are the combined, so it’s Raul Fernandez, Gardner, Lowes, Arbolino, Canet, Augusto Fernandez and Corsi in that bracket of a second off the top, with Dixon slotting in P8 on Day 1.

Marco Bezzecchi (Sky Racing Team VR46) was P9 and just under half a tenth off Dixon, with Schrötter completing the top ten just a further 0.006 in arrears.

Ramirez, Xavi Vierge (Petronas Sprinta Racing), Ai Ogura (Idemitsu Honda Team Asia) and Beaubier are the final riders on for a provisional place in Q2, with FP3 making the final decision on that on Saturday morning.

One rider who’ll be keen to move up is Joe Roberts (Italtrans Racing Team), down in P21, as he looks for more on home turf. Tune in for FP3 and then make sure to see the grid get decided for the Moto2™ race, with qualifying from 15:10 (GMT -5).

Filip Salač (CarXpert PrüstelGP) was the rider to beat on Day 1 at the Red Bull Grand Prix of the Americas, fast in a wet FP1 and a dry FP2 to end Friday top overall. Niccolo Antonelli (Avintia VR46 Academy) was second, within a tenth of the top and another fast in both conditions, with Aragon and Misano winner Dennis Foggia (Leopard Racing) third by the end of play, only half a tenth in further arrears.

Antonelli set the pace in a wet FP1 with a 2:32.152, a time good enough to beat Salač by just 0.015s as the two emerged as early favourites. Alberto Surra (Rivacold Snipers Team) finished third in the morning, which was an impressive display from the new VR46 Academy Italian on his first visit to Austin.

It was an eventful end to the session for World Championship leader Pedro Acosta (Red Bull KTM Ajo) and one of his closest challengers, Sergio Garcia (Solunion GASGAS Aspar Team), as the former crashed at the end of the session at Turn 14 and the latter at Turn 10. Acosta was perfectly ok and Garcia was able to get to his feet, and after a check-up in the medical centre, was declared fit.

FP2 was the time to strike in terms of the timesheets, with clear skies and sun returning to COTA. And after the final shuffle it was Salač who emerged on top, pipping Antonelli as the veteran Italian showed great pace in the wet and the dry. Foggia was within 0.126 of the top though, continuing his run of fine form that’s taken him to back-to-back wins.

They had a few tenths in hand over Acosta as the Championship leader acquitted himself well in the dry to take P6 and he also had some breathing space, with over three tenths back to Romano Fenati (Sterilgarda Max Racing Team).

Garcia was down in P14 in FP2, and then the Spaniard got some bad news. After further examination, scans at the hospital revealed a haematoma on his kidney and he’s been ruled out of the rest of the weekend.

The combined timesheets are currently the same as FP2 as everyone improved under the afternoon sun, so it’s Salač, Antonelli, Foggia, Masia and Artigas in the top five, the latter the top rookie and impressing on his COTA debut, as did a few fellow debutants on Day 1.

The number 43 pipped Championship leader Acosta to that honour of top rookie as the number 37 takes P6, with Fenati down in seventh. The veteran Italian is the only rider in the field to have already won at the track, and he’s done it twice…

Deniz Öncü (Red Bull KTM Tech3), Andrea Migno (Rivacold Snipers Team) and John McPhee (Petronas Sprinta Racing) complete the top ten, ahead of Stefano Nepa (BOE Owlride), Jeremy Alcoba (Indonesian Racing Gresini Moto3) and Ayumu Sasaki (Red Bull KTM Tech3). Garcia took that P14 in FP2 and overall, and he would be the last rider set to move through to Q2 but now withdraws from ahead of teammate Izan Guevara. But will it all shuffle again in FP3? Tune in on Saturday morning to find out, before qualifying from 12:35 (GMT -5).

#AmericasGP
Get All Our Latest News Sent Direct To Your Inbox
Join 30,253 other subscribers.
Follow on Social Media
Get the VROOM Podcast