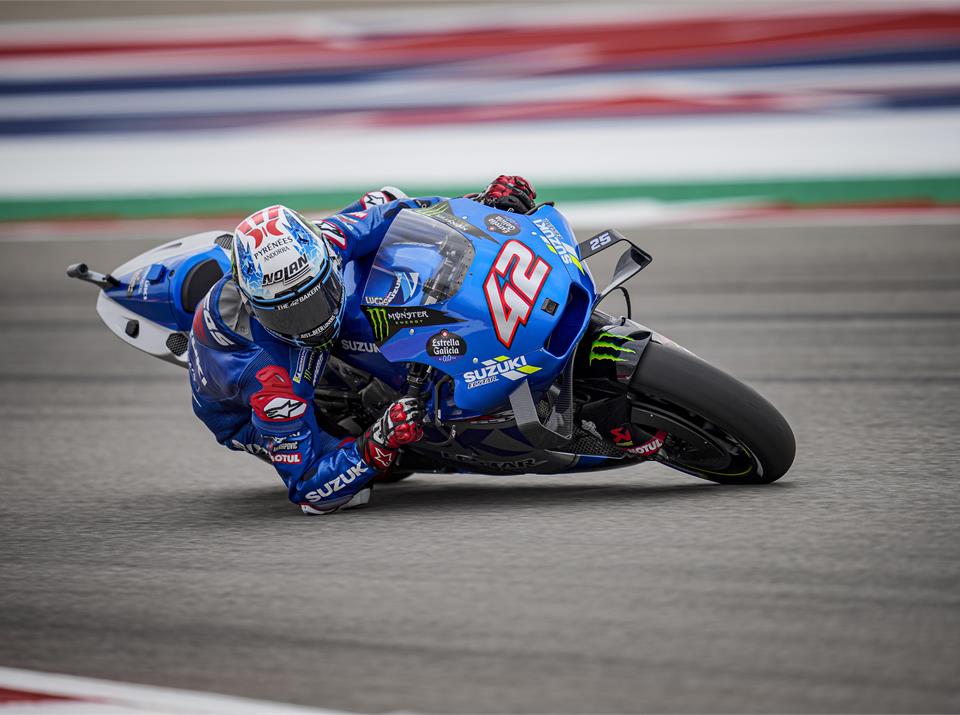 Despite early predictions, Saturday morning’s session at the Circuit of the Americas (COTA) brought grey clouds but no rain. This made FP3 extra important for securing a position in the Top 10. Alex Rins and Joan Mir spent the early part of the session trying to improve their feeling on the incredibly bumpy track, which often unsettles the bikes. Once they began to feel more comfortable, they went for time attacks. Rins got into third, but Mir just missed out on the Top 10 with 13th.

FP4 didn’t go to plan for Mir’s side of the garage when he had an issue with his number one bike. However, he was quick to rejoin the session with his second GSX-RR and move into an impressive second place. Meanwhile, Rins closed FP4 in seventh.

Mir also managed the competitive Q1 session very well, heading straight for top spot and consistently dropping his lap times to maintain his position in the Top 2 and progress into final qualifying.

In Q2 both Mir and Rins proved that they have strong pace on their GSX-RRs as they continued to shave several tenths off their lap times. Despite a couple of lost laps, Mir got into eighth and Rins was one place ahead in seventh.

“I’ll start tomorrow’s race from the third row in seventh position, and we did a good job finding a stronger set-up. I also had time to try different tyre compounds and check which will be best for the race, and we worked well and improved. It was a bit of a shame that I couldn’t reach the second row on the grid, because I would’ve liked that. But I feel pretty confident from seventh as well – it’s the same position I qualified last time here in 2019. Now we just have to wait for the race, which I’m really looking forward to although I’m expecting it to be very demanding both physically and mentally.”

“From the performance side, I’m really happy because we made a huge step. Even though we’re struggling to make one fast lap still, our overall pace is good. I’ve struggled a lot to find a nice feeling, because of the lack of stability, but I feel more confident about tomorrow’s race because my pace has improved. I would’ve liked to be a little faster in FP3 to get the direct passage to Q2, but I was feeling fine in Q1 and I got through comfortably. Obviously my bike stopped in FP4 and we’re still looking into the reasons behind that, but it didn’t really cost me in terms of my overall position today.”