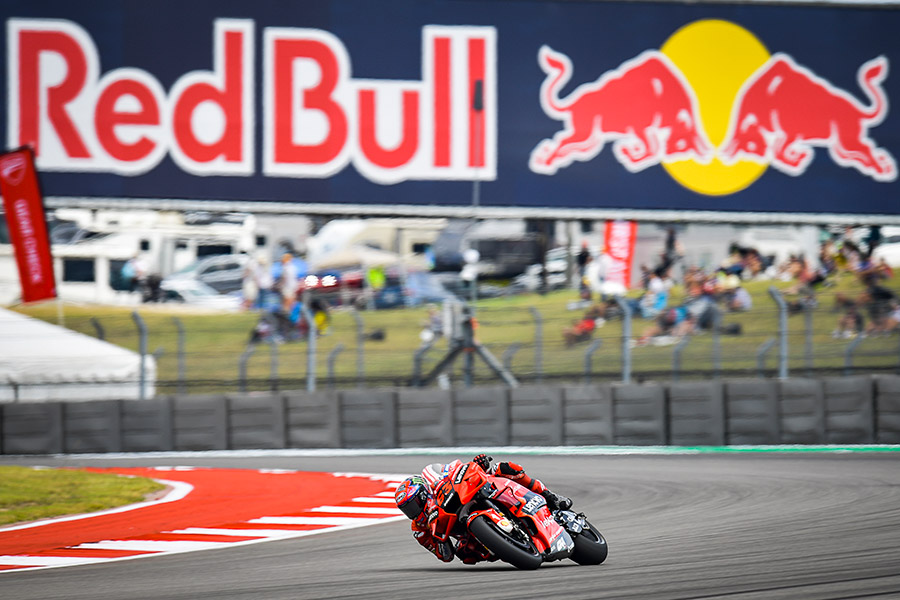 Three is now a magic number for Francesco Bagnaia (Ducati Lenovo Team) on Saturdays, with a third, successive and stunning pole position at the Red Bull Grand Prix of the Americas putting him in the perfect position to try and make the same true on Sunday. Pulling out more than three tenths at the top it makes Pecco only the second rider – after Marc Marquez (Repsol Honda Team) – to start from pole in Texas, but he does have company from key Championship rival Fabio Quartararo (Monster Energy Yamaha MotoGP). The Frenchman is second once again to keep tabs on the Italian, with the aforementioned Sheriff of COTA, Marc Marquez, forced to settle for third – but it’s a first front row of the year as the eight-time World Champion continues his battle back to the front.

Reigning Champion Joan Mir (Team Suzuki Ecstar) was down in Q1 and looking for a way out, and for much of the session it seemed he’d head through fastest. But Luca Marini (Sky VR46 Avintia) had other ideas, and the rookie Italian put in a late lunge for the top to take over. Mir remained second to move through though, denying Franco Morbidelli (Monster Energy Yamaha MotoGP).

Andrea Dovizioso (Petronas Sprinta Racing) was stringing together a good lap late on, but the Italian then got caught behind other riders and just missed out.

After the first runs in Q2, it was the King of COTA on to retain the throne – certainly on Saturday – with Marc Marquez ahead of the chasing pack. But there was still some left in the locker for Quartararo and for Bagnaia, and the eight-time World Champion couldn’t quite better his previous best.

Pecco, however, could. The Italian put in an absolute stunner late on, laying it all out there on his second and final attempt at the top. A whole chunk of time up for most of the lap, the Italian crossed the line to take over on provisional pole by nearly half a second ahead of Marquez. Left to go were Quartararo and Jack Miller (Ducati Lenovo Team)…

Quartararo was up initially, but for Miller the attack never came. The Australian wasn’t able to replicate his scorching form from previous sessions, and he was out of the running after running out of time. What could El Diablo do? As the timings came up later in the lap, it wasn’t going to be enough, and Marquez hadn’t put a better effort together either. So, for the first time ever, someone other than the number 93 is on pole at COTA: Bagnaia.

Bagnaia heads Quartararo as the top two once again lock out the top, now with Marquez alongside as the eight-time World Champion takes third. Jorge Martin (Pramac Racing), who had been behind Marquez when the Honda rider was on for provisional pole, stayed there so he’ll now head up Row 2 – as top Independent Team rider too.

It’s an all-Independent second row, in fact, with Takaaki Nakagami’s (LCR Honda Idemitsu) good weekend continuing in fifth and Johann Zarco (Pramac Racing) taking P6, back towards the sharp end following his arm pump surgery ahead of the event.

Miller is tenth and raring to push back through, with Brad Binder (Red Bull KTM Factory Racing) and Pol Espargaro (Repsol Honda Team) the last of those in Q2, in P11 and P12 respectively.

Raul Fernandez came out on top in another Red Bull KTM Ajo qualifying duel at the Red Bull Grand Prix of the Americas as the top two in the World Championship lineup P1 and P2 on the grid for Sunday’s race. Points leader Gardner was 0.320 off Fernandez’ 2:08.979 as the rookie kept the upper hand on Saturday though, with Fabio Di Giannantonio (Federal Oil Gresini Moto2) earning a first front row start since the German GP in P3.

Marcos Ramirez (American Racing) found some pace to top the session by three tenths, ahead of Celestino Vietti (Sky Racing Team VR46) as the rookie Italian got the job done in second to move through. The gaps from there were tiny, with Somkiat Chantra (Idemitsu Honda Team Asia) just another 0.014 off and Tony Arbolino (Liqui Moly Intact GP) 0.040 off Chantra.

That was enough to see them move through and that denied Marcel Shrötter (Liqui Moly Intact GP), and it was a tough session for Joe Roberts (Italtrans Racing Team) as the home hero ended Q1 in P12.

Di Giannantonio topped the early stages of Moto2™ Q2 but with just over five minutes to go, Gardner propelled himself to the top although only by 0.063. Raul Fernandez was third and two tenths down on his title rival after his opening efforts, with Marco Bezzecchi (Sky Racing Team VR46) and home hero Cameron Beaubier (American Racing) inside the provisional top five too early doors.

With four minutes left, Sam Lowes (Elf Marc VDS Racing Team) crashed unhurt while down in P15, and then all eyes turned to Raul Fernandez. The Spaniard was 0.029 under Gardner’s time at the second split, and then an impressive three tenths faster through Sector 3. Sure enough, it was destination P1 for Raul Fernandez on his final flying lap, a scorching time that secured pole at COTA. Gardner is forced to settle for second but will be happy to have homed in on Saturda, with Diggia hanging onto the front row.

Behind Raul Fernandez, Gardner and Diggia at the head of the field, Bezzecchi and Beaubier held station in the latter stages to claim P4 and P5 in Texas, the American picking up his best Moto2™ qualifying result – less than two tenths away from a front row as his MotoAmerica experience and home magic come to the fore. Augusto Fernandez (Elf Marc VDS Racing Team) will start from the outside of Row 2 in P6.

Rookie Arbolino picks up his best Q2 result since the Italian GP, and he’s seventh ahead of fellow rookie Ai Ogura (Idemitsu Honda Team Asia). Reigning Moto3™ World Champion Albert Arenas (Inde Aspar Team) in ninth and Vietti in 10th makes it six rookies inside the top 10 in Moto2™ qualifying – a phenomenal job from the less experienced riders in the intermediate class at a challenging and long circuit.

Jaume Masia is back on top in Texas. The Red Bull KTM Ajo rider took his fourth career pole and second of the season at the Red Bull Grand Prix of the Americas, beating Dennis Foggia (Leopard Racing) to the top by a couple of tenths. Jeremy Alcoba (Indonesian Racing Gresini Moto3) completes the front row, just 0.003 off Foggia.

Q1 saw both Darryn Binder (Petronas Sprinta Racing) and teammate John McPhee looking for a way through and both found one, but it was rookie Lorenzo Fellon (SIC58 Squadra Corse) who topped the session despite a tumble. Alberto Surra (Rivacold Snipers Team) was the final rider moving through.

The fight for pole boiled down to Masia vs Foggia, with the Spaniard taking over on top as the Italian was heading round on his final push. Behind teammate Xavier Artigas (Leopard Racing), Foggia’s first sector was a red one but as the lap went one, he lost touch by enough to deny a really challenge for pole. That left Masia unchallenged to take his second pole of the season, but Foggia nevertheless starts second as he continues his mission to cut the Championship gap. Alcoba took third.

Championship leader Acosta, who was riding in tandem with teammate Masia too, couldn’t make much of a dent in the top and took P15, with fellow rookies Izan Guevara (Solunion GASGAS Aspar Team) and Artigas outgunning him somewhat on Saturday, taking fourth and fifth, respectively.

Masia, Foggia and Alcoba head up the grid, ahead of the rookie duo. For Guevara it’s his second best qualifying yet, and it’s Artigas’ best, although equal best starting position of the season… no mean feat for riders making their debuts at the mammoth COTA. Tatsuki Suzuki (SIC58 Squadra Corse) completes Row 2.

Acosta 15th, Foggia near the front and Masia free of that pressure at the zenith of the title fight could make for an interesting race day in Texas.