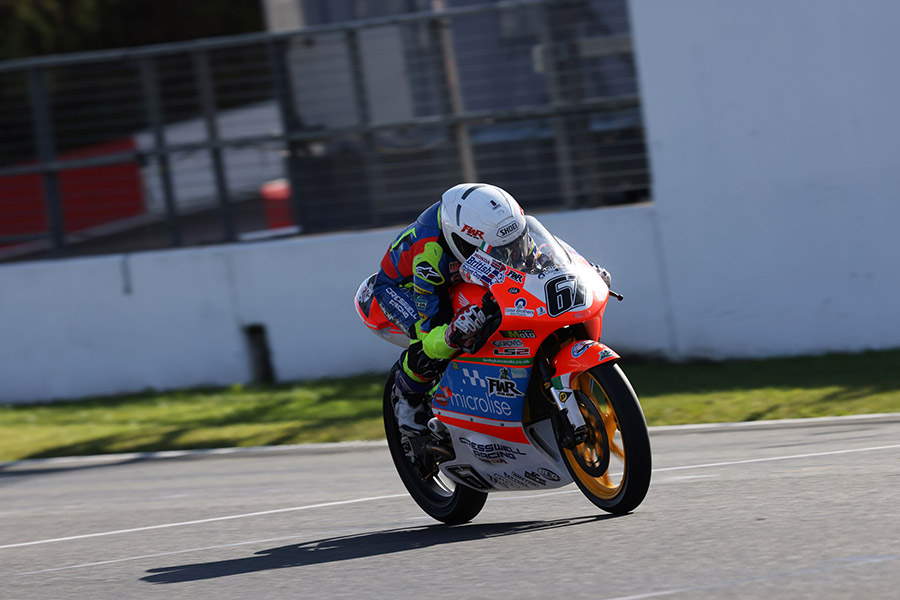 Casey O’Gorman (Microlise Cresswell Racing) ended the season on a high as the number 67 put in another stunner at Donington Park to secure the 2021 Honda British Talent Cup. Getting the holeshot and, this time in the dry, putting in another dominant performance saw the points leader wrap up the crown in style as closest Championship rival Carter Brown (City Lifting by RS Racing) came home second. Jamie Lyons (C&M Motors Ltd/Tooltec Racing) locked out the podium, ending the season with another top finish.

From the off it was a two rider fight at the front, with O’Gorman streaking away in the lead and only Brown able to go with him. Lyons was holding station in third with a small gap behind him too, with a gaggle of riders then fighting over fourth.

Brown stuck in behind O’Gorman initially, but the number 67 then started to stretch his legs and the gap began to go up. Keeping it tidy under pressure, it was nearly seven seconds by the time the Microlise Cresswell Racing rider made it to the flag to sign off from 2021 in style. Eight wins, three missed rounds and some injury struggles later, O’Gorman is the Honda British Talent Cup Champion!

The fight for second saw Lyons catch Brown mid race and it seemed like that would boil over into a duel, but ultimately the number 74 was able to stay ahead and pull away again, just over two seconds clear of Lyons by the flag. For both it ends the season on a solid high, however, and secures them second and fourth in the final standings, respectively.

The fight for fourth saw Cormac Buchanan (Microlise Cresswell Racing) suffer some late heartbreak as he crashed out, leaving Evan Belford (City Lifting by RS Racing) vs teammate Johnny Garness as the duel for 13 points. Belford took it in the end, securing P3 in the Championship in the process as Garness completed the top five in the race for P5 in the standings.

Rhys Stephenson (Rocket Racing) took another impressive result on Sunday in P6, with some time in hand over Bailey Stuart-Campbell (151s Racing) in seventh. Harrison Crosby (Banks Racing) had a lonelier ride to P8, with the top ten completed by a close finish between Rossi Banham (MJL Racing) and Harley McCabe (MLav VisionTrack Academy).

That’s a wrap on 2021. Congratulations to O’Gorman, Brown, Belford and all those who won, progressed and learned on the Road to MotoGP™ this season. The Honda British Talent Cup will return in 2022, so stay tuned for more updates.