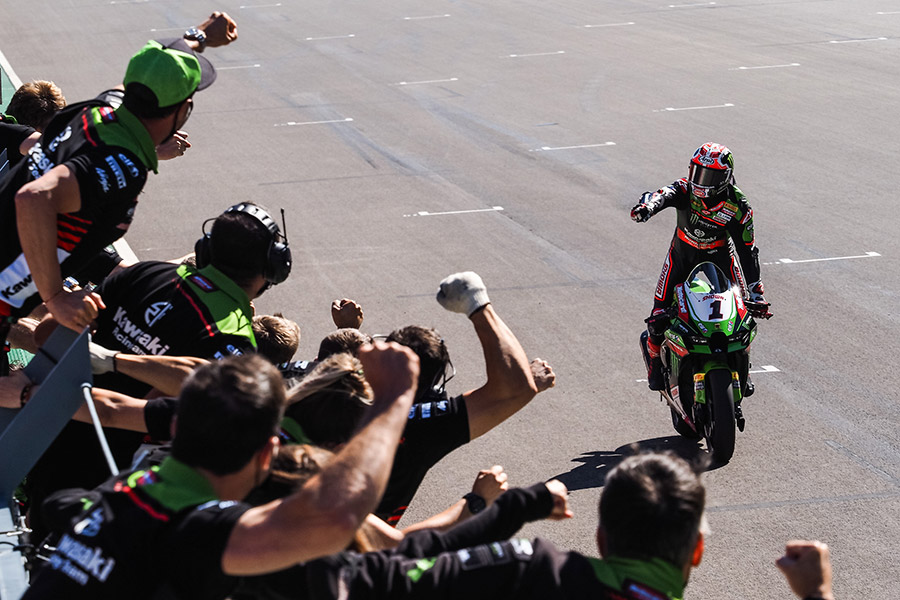 The rollercoaster venue of the Autodromo Internacional do Algarve provided more ups and downs in the battle for the MOTUL FIM Superbike World Championship as Jonathan Rea (Kawasaki Racing Team WorldSBK) responded to two crashes during the Motul Portuguese Round with an emphatic victory while Championship leader Toprak Razgatlioglu (Pata Yamaha with Brixx WorldSBK) crashed out of the race at Turn 15.

The start was delayed due to a technical issue when the riders were lining up on the grid for the start of Race 2, with the delayed start meaning the race distanced was reduced one lap from 20 laps to 19. Jonathan Rea (Kawasaki Racing Team WorldSBK) was on the move from tenth place as he found himself in second place at the end of the opening lap, while Toprak Razgatlioglu (Pata Yamaha with Brixx WorldSBK) moved into third place.

Rea made his move for the lead through the fast Turn 9 left-hander on Lap 2 on Scott Redding (Aruba.it Racing – Ducati), relegating the British rider who had led from the start. At the start of Lap 2, Razgatlioglu passed Rea into Turn 1 before the six-time World Champion responded. The trio were battling throughout the opening laps, with both Razgatlioglu and Rea able to take advantage of Redding running wide at Turn 5 at Turn 10 on the same lap. Razgatlioglu made a move on Rea down the start-and-finish straight to move into the right-hander of Turn 1 at the start of Lap 7, before Rea responded at Turn 11.

The FIM Supersport World Championship action concluded at the Autodromo Internacional do Algarve in thrilling style with Steven Odendaal (Evan Bros. WorldSSP Yamaha Team) claiming his fifth win of the season and denying Jules Cluzel (GMT94 Yamaha) a Portimao double by just 0.011s across the line in Race 2 for the Motul Portuguese Round as the South African cut his gap in the Championship.

Although Jules Cluzel (GMT94 Yamaha) got a good start as the lights went out, Steven Odendaal (Evan Bros. WorldSSP Yamaha Team) was the rider on the move as he battled his way up from seventh to lead at the start of the second lap after passing three riders into Turn 1, with the action on the opening lap setting the tone for the rest of the race.

Soon, a lead group of nine riders formed with Odendaal leading as the seventh lap started before, he was passed by Championship leader Dominique Aegerter (Ten Kate Racing Yamaha) into Turn 1, with the lead constantly changing throughout the 17-lap race. As Lap 10 ended, Odendaal ran wide throughout the final corner and lost time and positions, allowing Cluzel to take the lead of the race with the South African dropping down into the mid-pack of the lead group.

The race would go down to the wire between Odendaal and Cluzel, as the lead group fragmented in the second half of the race, with the South African claiming victory for the fifth time of his season and his first since Race 1 at Most, ahead of Cluzel who doubled up on podiums at Portimao. The pair were separated by just 0.011s at the end of the 17 laps, with Federico Caricasulo (Biblion Iberica Yamaha Motoxracing) claiming his first podium since 2019 at the same venue. Just 0.364s separated the podium trio at the line.

The final race of the 2021 FIM Supersport 300 World Championship provided some of the same drama and excitement at the Autodromo Internacional do Algarve as the rest of the season has as newly-crowned Champion Adrian Huertas (MTM Kawasaki) claimed victory in Race 2 for the Motul Portuguese Round in a typically-frantic encounter to round out the 2021 campaign.

The first half of the 13-lap race involved riders looking to try to break away but it was the 2021 Champion, Huertas, who was able to do so with just a handful of laps to go, extending his lead at the start of the penultimate lap to more than two seconds as he ended the season in scintillating style for his sixth victory of a record-breaking season; decorated in a special gold livery on his Kawasaki machine and his helmet. Huertas’ victory was the 25th for Spain in the Championship, as well as the eighth of his career which equals teammate Jeffrey Buis (MTM Kawasaki) from 2020.

British rider Tom Booth-Amos (Fusport – RT Motorsports by SKM – Kawasaki) had challenged for the title in 2021 but an injury sustained in Catalunya derailed his title aspirations, but he was able to secure second in the Championship after finishing second in Race 2 after Jeffrey Buis (MTM Kawasaki) retired from the race following a late-race crash which forced the 2020 Champion out of the race, with Buis taking third in the Championship. Bahattin Sofuoglu (Biblion Yamaha Motoxracing) had crossed the line in third place but was given a three-second time penalty in lieu of a Long Lap Penalty after it was deemed he had being riding irresponsibly, meaning he was classified in 17th place, while Iñigo Iglesias (SMW Racing) claimed third place.

#PRTWorldSBK
Get All Our Latest News Sent Direct To Your Inbox
Join 30,253 other subscribers.
Follow on Social Media
Get the VROOM Podcast