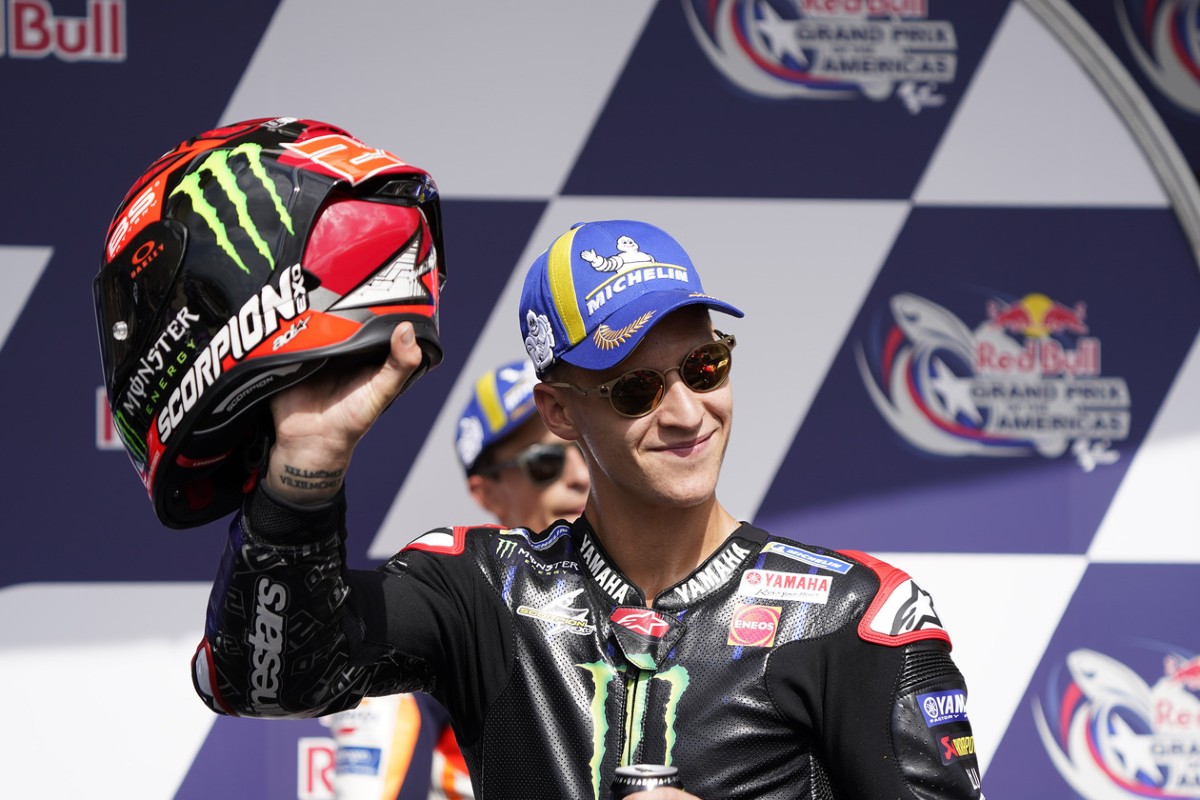 The Monster Energy Yamaha MotoGP Team continued their search for the perfect setting to suit the Circuit of The Americas (COTA) on Day 2 in Austin to get ready for qualifying. Fabio Quartararo didn‘t hold anything back in Q2 and grabbed 2nd place, his 14th front-row start of the season. Franco Morbidelli had to take part in Q1 and secured 13th place on the grid for tomorrow‘s race.

After a strong improvement in the FP4 session, Quartararo let the majority of the other Q2 riders leave pit lane ahead of him. He slotted into seventh place in the timesheets on his opening bid, but he was just getting started. His second attempt saw him jump up the order to fifth place. Unable to improve on his next try, he pulled up at the team‘s box with five and a half minutes remaining for a lightning-fast stop.

Thanks to his speedy tyre change, the Frenchman had time for two more flyers. When the times quickened at the end of the session, El Diablo responded by clocking a 2‘03.129s, moving him to second, 0.348s from pole. He had one more try but was unable to edge closer. He will start tomorrow‘s race from the middle of the front row.

Morbidelli was quick to head out in Q1 at the long Austin track. He was in strong contention at the start of the session as his 2‘04.142s banker lap put him second place. Unable to improve on his next attempt, he returned to the pits with seven and a half minutes to go.

The Italian still held second place as he resumed his shoot-out three minutes later. He wasn‘t shy to really open the throttle on his second run and set a personal best of 2‘03.872s but was still pushed back to third. Unable to better his time on his last attempt, Morbidelli ended the session in third place, 0.462s from first. He will start the race from 13th place.

It’s great to be on the front row, but I’m struggling to make that extra step in qualifying with the soft tyres. We will try to figure out why. I’m so happy because I didn’t feel so great during the practice sessions, but I went for it during qualifying. It’s always great to start from the front row. Let’s see what we can do tomorrow. Our pace isn’t looking so bad, and we will see which tyres we’ll use.

It was a good qualifying. We kept our improvement curve going. We went better and better throughout the day. I’m happy because we’re improving every session. This is positive! This should be our aim. I’m learning more and more about the bike and we’re adapting it more and more to my style. It’s paying off. Today, I needed to pace myself a little bit because of the knee. Tomorrow will be a tough race, but the feeling is better than it was in Misano anyway, so this is really good. Let’s go forward, try to improve a bit more tomorrow morning, and then let’s see.