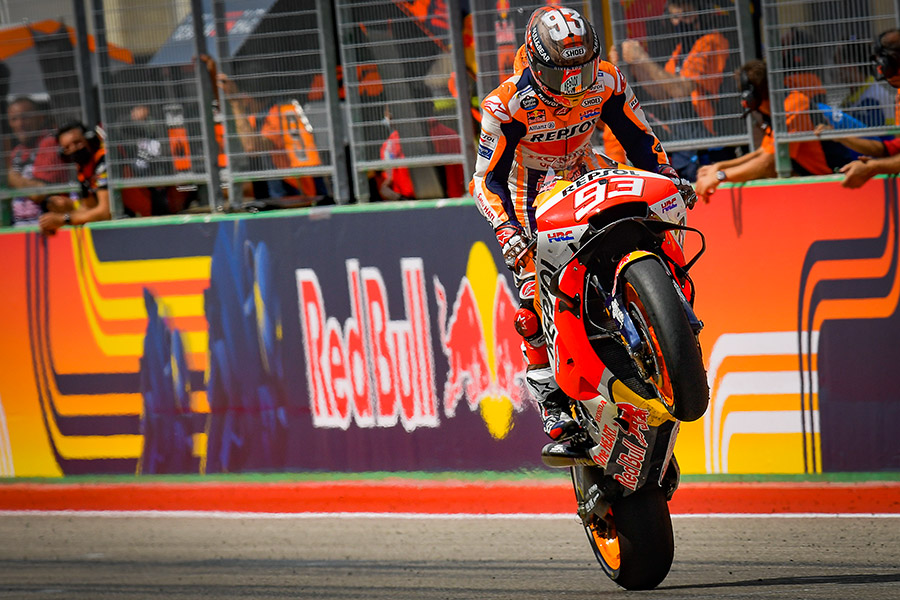 The King of COTA is back… A faultless display from Marc Marquez saw the Repsol Honda Team rider take a magnificent seventh win at the Circuit of The Americas as the number 93 stormed to a second victory of 2021. Fabio Quartararo (Monster Energy Yamaha MotoGP) extended his World Championship lead with a valuable second place at the Red Bull Grand Prix of The Americas, with Francesco Bagnaia (Ducati Lenovo Team) taking third but now 52 points shy of the Frenchman with three races to go…

Plan A was executed to perfection by Marc Marquez from third on the grid, the number 93 grabbing the holeshot as Quartararo also got the better of polesitter Bagnaia. The latter then lost another place to the fast-starting Alex Rins (Team Suzuki Ecstar) on the opening lap, with Pecco then demoted to P5 as Jorge Martin (Pramac Racing) carved his way past on Lap 2 too.

Then, Takaaki Nakagami (LCR Honda Idemitsu) was the first crasher of the race, the Japanese rider sixth when he tumbled out on Lap 2. Further back on Miller watch, Jack Miller (Ducati Lenovo Team) was making good progress on the hard rear Michelin tyre from 10th on the grid, and the Aussie grabbed a two-for-one deal at Turn 12 to pass Brad Binder (Red Bull KTM Factory Racing) and Joan Mir (Team Suzuki Ecstar) on Lap 3 for sixth .

After dispatching Rins, Martin was a formidable nuisance for Championship leader Quartararo as Marc Marquez started to stretch his lead to a second for the first time. Miller, having passed teammate Pecco, was now ahead of Rins in P4 too and the Aussie was the man on the move. Bagnaia, in turn, was struggling to keep up with the top five, initially down in sixth.

Lap 8 of 20 ticked by and Marc Marquez slammed in a 2:04.368, his lead was now up to a second and a half over Quartararo. By 11 to go, that gap had been stretched to 2.3, with Quartararo, in turn, a second clear of Martin. Miller was only half a second down on his fellow Ducati rider and 1.3 behind came Pecco, who had started to find some rhythm – the Italian soon passing Rins.

Pecco then latched onto the back of teammate Miller, before the latter allowed his teammate through – with every point in the title race absolutely critical at this stage, especially with Quartararo up ahead on second. Now, the question was: could Bagnaia catch and pass Martin for third? With four laps to go, the gap was suddenly nothing, with Martin seemingly looking down at his dashboard a few times. Was the rookie struggling, or were Ducati intervening? It wouldn’t matter in the end, with Martin being handed a Long Lap Penalty for not losing enough time at Turns 4 and 5 when he had a front end moment and ran off.

In the end though, Captain America returned to reign once again in Austin. Marc Marquez gave the Repsol Honda Team their 450th premier class podium with a classy ride at COTA, as Quartararo takes a second place that gives him his first match point of the season next time out at Misano. Bagnaia recovered well to claim P3, but its ground lost in the Championship chase… although Misano went pretty well last time for the Italian.

Rins was able to finish P4, profiting from Martin’s Long Lap Penalty, the latter unlucky to finish fifth after another fantastic ride but still top Independent Team rider. Sixth place went the way of Enea Bastianini (Avintia Esponsorama), who once again impressed as his form rolls on. He also benefitted from a clash between Mir and Miller on the final lap, and the Rookie of the Year battle is close still between Martin and Bastianini heading into the final three races.

The Mir-Miller clash earned the Suzuki rider some post-race interest from both Miller and the FIM MotoGP™ Stewards Panel. The number 36’s move on Miller at Turn 15 saw the reigning World Champion make contact with the Ducati and he received a one place penalty. Mir crossed the line in P7 with Miller P8, that result is switched after the penalty.

So that’s that from Texas. A dream return to COTA for Marc Marquez sees the King reclaim his Austin crown. And equally as happy is Quartararo, with that 52-point advantage meaning he could now win the 2021 title next time out at Misano.

Raul Fernandez (Red Bull KTM Ajo) took a magnificent seventh win of the season in the Red Bull Grand Prix of the Americas, matching Marc Marquez’ record of seven wins as a Moto2™ rookie. The 25 points – and the continued steamrolling performance – also see him gain big on teammate Remy Gardner in the title fight, with the Australian sliding out in his first and only mistake of the year so far. Fabio Di Giannantonio (Federal Oil Gresini Moto2) came through for second as he took a step back forward in Texas, with Marco Bezzecchi (Sky Racing Team VR46) taking third.

To the delight of the home crowd, Cameron Beaubier (American Racing) led into Turn 1 from the middle of the second row, but the Moto2™ rookie was in hot which allowed Gardner to swoop through into the lead. Raul Fernandez was soon P1 though, as Gardner then dropped to P4 after getting a miserable run out of the final corner heading onto Lap 2. Beaubier and Di Giannantonio were up to P2 and P3, but Gardner fought back by Lap 4.

Raul Fernandez was a second and a half up the road from Gardner, as drama unfolded for the latter. On Lap 6 at Turn 15, Gardner made his first major mistake of 2021. The Australian tucked the front and was unable to restart his machine, meaning the title race leader would score a DNF for the first time this season… but would his teammate get the job done?

Yes. With 10 laps to go, Raul Fernandez held a 1.7 lead over Di Giannantonio and no had could stop the rookie sensation from taking a monumental victory at COTA. The number 25 has been outstanding all weekend in Austin, and his latest win – coupled with Gardner’s DNF – means the Moto2™ title race is raging with three to go, jut nine points in it.

Di Giannantonio escaped the clutches of the battle for P3 between Bezzecchi, Beaubier and Tony Arbolino (Liqui Moly Intact GP), and Beaubier and Arbolino then lost touch with Bezzecchi, with Augusto Fernandez (Elf Marc VDS Racing Team) the swooping through to get the better of the pair.

Di Giannantonio sailed home for second and a welcome return to the podium, ahead of Bezzecchi. Augusto Fernandez clawed his way back up to P4 and then finished just 0.9s off Bezzecchi, and in fifth came the home hero. Beaubier capped off a phenomenal home Grand Prix with his best Moto2™ result yet, showing his experience and talent at a difficult but familiar track.

After a seismic shift at COTA it’s now just nine points between the top two, and next up it’s Misano… where we saw an incredibly close finish not too long ago. What will the Emilia-Romagna GP bring? We’ll find out soon enough…

After a dramatic morning for the Moto3™ class at the Red Bull Grand Prix of the Americas, Izan Guevara (Solunion GASGAS Aspar Team) emerged victorious for his maiden World Championship win. The race was initially red flagged for an incident for Filip Salač (CarXpert PrüstelGP), before the restarted race then also came to an early end following a multi-rider incident between Deniz Öncü (Red Bull KTM Tech3), Jeremy Alcoba (Indonesian Racing Gresini Moto3), Andrea Migno (Rivacold Snipers Team) and Championship leader Pedro Acosta (Red Bull KTM Ajo), riders all ok. Öncü, however, was given a two-race suspension for the incident and will sit out the Emilia-Romagna and Algarve GPs.

As 2/3 of the race distance was not completed when that second Red Flag was brought out and there was no further restart, the first start is taken as the race result and full points awarded accordingly – with Guevara earning his first 25 after steaming away at the front.

Jaume Masia (Red Bull KTM Ajo) took the holeshot before Xavier Artigas (Leopard Racing) attacked for the lead, but the rookie had just jumped the start and was given a double Long Lap Penalty. As he peeled off it was Guevara up into second ahead of Masia and Alcoba, with Dennis Foggia (Leopard Racing) on the chase in fourth.

The crash for Salač then brought out the first Red Flag, the Czech rider falling alone and then taken to hospital for a full check up, and the restart was set for a five-lap sprint. Guevara was away in the lead again as the lights went out, but then heartbreak seemed to strike for the number 28 as a technical problem took him out the lead.

However, the back straight then saw Öncü make contact with Alcoba and the Spaniard go down, with Migno and Acosta caught up in the avoiding action. The Red Flag was immediately redeployed, and it was announced there would be no second restart, with the results taken from the first initial race. That added to the emotional rollercoaster for Guevara and he was pronounced victorious, having led for much of the action anyway, and the rookie takes his first win – ahead of Foggia and McPhee as the two charged up the field early.

Masia just missed out on the podium and takes P4, with Öncü and Alcoba classified P5 and P6 as they were in the first start. Binder takes seventh and Acosta is eighth – which sees Foggia gain a big chunk of points and the gap come down to 30 between the top two in the Championship.

Next up Moto3™ takes on Misano once again, which was Foggia turf on our last visit. With the gap now just 30 points, will the title fight get even closer in Emilia-Romagna? We’ll find out in a few weeks’ time…