Brad Binder 9th and Miguel Oliveira 11th in the #AmericasGP 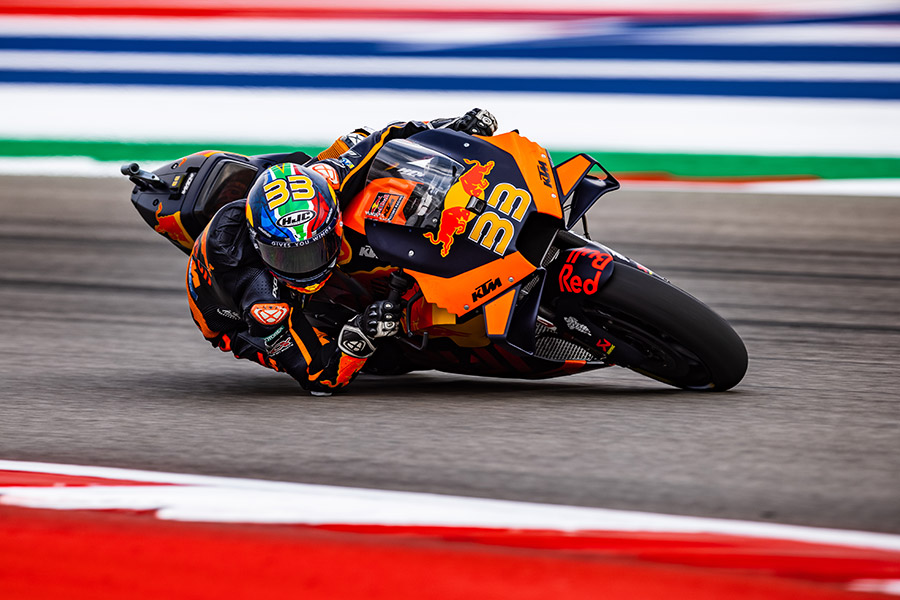 The first of the four final outings in the 2021 MotoGP championship took the series to the long and demanding Circuit of the Americas and Red Bull KTM Factory Racing’s Brad Binder defied the intense heat to finish 9th on the KTM RC16.

As well as a grid-full of rivals, the Red Bull KTM Factory Racing and Tech3 KTM Factory Racing teams had to grapple with the long (5.5km), 20 corner and surprisingly rough COTA layout for 20 draining laps in hot and humid conditions.

Brad Binder roared away from 11th place on the start grid and enjoyed an intense fight with world champion Joan Mir for most of the distance. The 26-year-old just dropped away from the tussle for 6th in the final stages.

Teammate Miguel Oliveira embarked on a busy race trying to regain ground and positions from 18th after a complicated qualification process. The Portuguese applied himself to the task diligently and was rewarded with 11th; his highest classification of the last six rounds.

MotoGP journeys back to Europe for the final trio of Grand Prix events in San Marino, Portugal and Spain. The series breaks for two weeks before reconvening at the Misano World Circuit on October 23rd and 24th for the Gran Premio Nolan del Made in Italy e dell’Emilia-Romagna.

Brad Binder:
“Today, going into the race, I felt that we hadn’t done a lot of quality laps this weekend. I didn’t have the best rhythm and I was missing a bit of speed but in the end I gave my best and the team did a fantastic job to give me the best available package for the race. We are nowhere near where we need to be – and where we want to be – but it was P9 today. There was not much more I could have done. We’ll keep working and try again in Misano.”

Miguel Oliveira:
“As we expected it was a hard race and difficult to make a lot of positions. Anyway, we recovered some places. We scored points and we raced well. We are looking forward to Misano where we just need to understand how to qualify better and then fight for better positions in the race. I’m happier now that we have finished the race here and achieved something. Looking to the future this was an important step.”