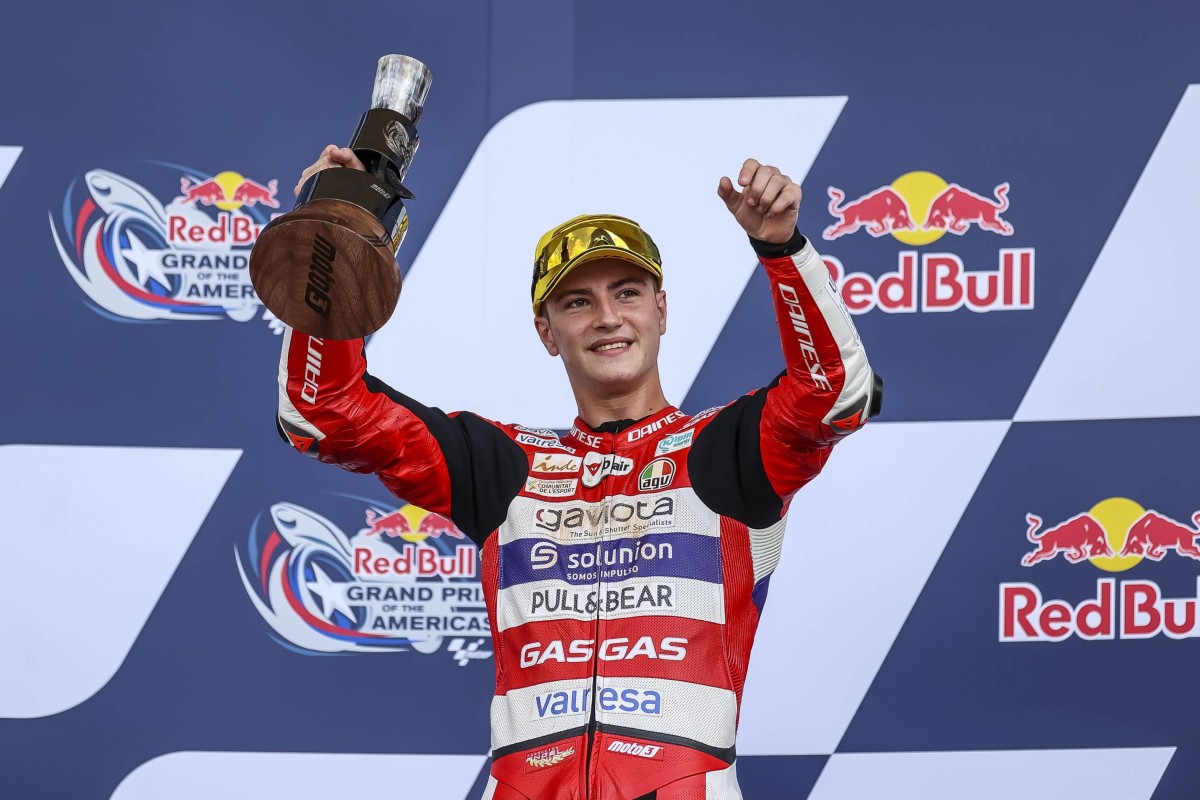 Part epic race track, part winding ‘rodeo’, part full-throttle-roller coaster. Any visit to the incredible Circuit of the Americas in Austin Texas is guaranteed to give a big shot of adrenaline in the arm; whether you are on or off the bike. For the Solunion GASGAS Aspar Team, the Texan weekender proved almost too tense to watch. Case in point: at the final flag of Moto3 on Sunday afternoon, one rider was in the medical centre, and one rider was standing on top of the podium.

After teasing impressive form in the season so far, reigning Junior Moto3 World Champion Izan Gueavara arguably came of age at his first visit to the winding 5.4km circuit of the Americas. The 17-year-old was flying the flag solo for the Solunion GASGAS Aspar Team, qualifying strongly into fourth position on the grid.

On race day Guevara turned up the heat even further – making a stunning start and rocketing into the race lead on lap one. While the chasing pack batted it out on the blistering 36°C tarmac behind him, Guevara kept a cool head and simply didn’t look back.

What followed was an incredible ride of highs and lows – featuring two red flag periods, a huge mid-pack crash, and a broken rear shock absorber on Guevara’s bike. However the results sheets speak for themselves, and Izan Guevara is now a full points Moto3 Grand Prix winner, moving him up eighth in the championship.

Unfortunately Solunion GASGAS Aspar Teammate Sergio Garcia was ruled out of the Red Bull Grand Prix of The Americas after scans at the hospital found a haematoma in his kidney following a crash on Saturday.

Garcia crashed at the end of FP1 at turn 10 but was declared fit for FP2 in the wake of a check-up. After not feeling fully fit, Garcia visited the medical centre again where an x-ray revealed no injuries. However, to rule out any other problems Garcia was transferred to Dell Seton Medical Center hospital in Austin for further examination. Scans at the hospital then revealed the haematoma and he remained under observation for the remainder of the weekend.

Where do I start? The craziest race of my life. I’m really happy and a result like this has been coming. The race had been going very well for me and the red flag stopped us cold. We started the five-lap sprint but then we broke the rear shock when I was sure we were in a position to win. I didn’t have any words and I still don’t! I’m just really happy that they counted that first race!

#AmericasGP
Get All Our Latest News Sent Direct To Your Inbox
Join 30,253 other subscribers.
Follow on Social Media
Get the VROOM Podcast