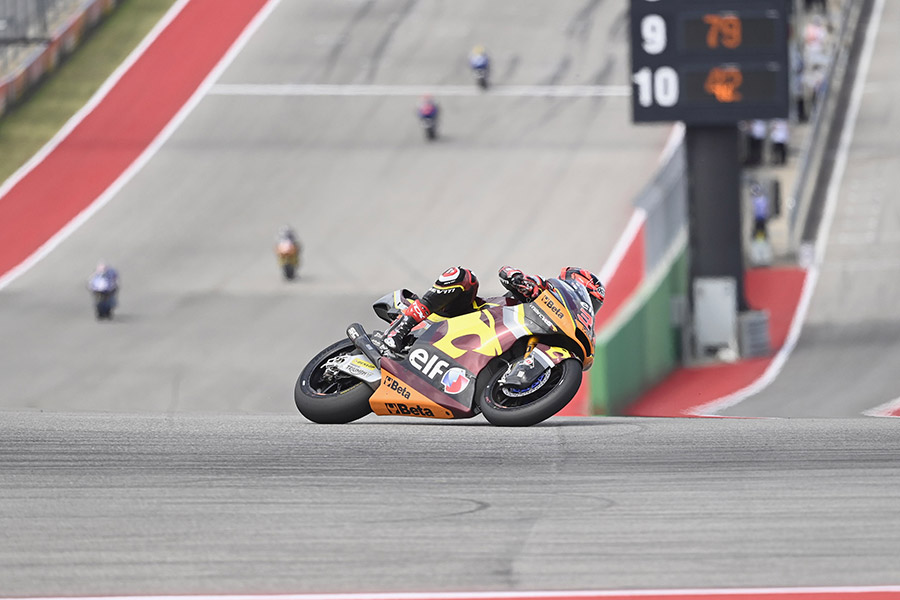 Augusto Fernandez fought through the field for a fine fourth on his first visit to the Circuit of the Americas while Sam Lowes retired due to an unfortunate technical problem.

The Moto2 field faced arguably the toughest conditions of the season at the complex 5.51km Circuit of the Americas outside Austin, Texas, due the bumpy nature of the track surface.

Despite never competing at the Circuit of the Americas before this weekend, Augusto was a model of consistency throughout, placing inside the top six positions in every session, including sixth in qualifying.

Augusto dropped a place on the first lap, but then established his rhythm, picking up positions. By lap eleven, he passed Cameron Beaubier for fourth and finished just 4s behind race winner Raul Fernandez.

Augusto’s tenth top six finish of 2021 pushes him up a place in the World Championship, from sixth to fifth, with 131 points.

Augusto Fernandez
“Very happy about today. It was a really hard race. I didn’t make a bad start but I was struggling with the full fuel tank and in the braking zones. People were passing me and I couldn’t defend my position. I had to find my pace and once I did, I started to recover positions. Basically, I felt perfect after some laps. I was pushing until the end to catch (Marco) Bezzecchi but it wasn’t enough. I think we lost too much time at the beginning. Anyway, I’m super happy to come to a new, difficult track like this one. Going home with a P4 means very good points for the championship. Let’s keep going like this.”

Sam Lowes faced a tough task to rise through from 16th on the grid, and his job for the day was complicated further after a tough start to the race. Sam ended the first lap in 23rd.

After gaining some ground, in the early laps, the Briton then had to retire with nine laps to go due to a misfire.

Lowes remains fourth in the World Championship with 140 points to his name.

Sam Lowes
“A terrible weekend. The bike felt better in the race so this was positive and the pace we had all weekend was good. We were not so far away from the top guys. But the problem was we had a misfire in the race. I was losing a lot of time and it was becoming a little bit dangerous around other riders so there was no point in continuing. It was unfortunate. We’ll find the problem and go back to Misano and get some nice results. We have to keep working. It’s a long way to come to have this problem. But it’s no fault of myself or the team so, of course, this is frustrating.”