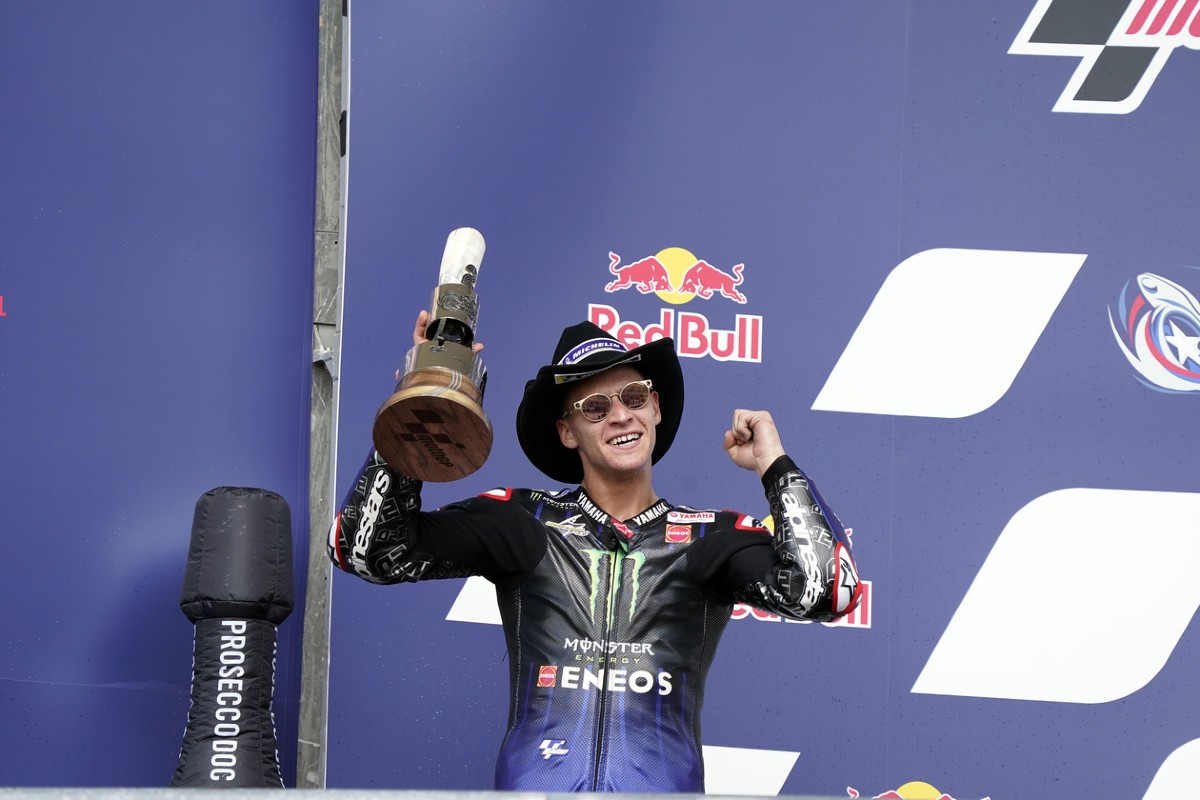 Monster Energy Yamaha MotoGP‘s Fabio Quartararo delivered a mature ride in today‘s Grand Prix of The Americas. The championship leader balanced on a fine line between defending second place and chasing the race leader. He extended his margin in the standings to 52 points in the process. Due to his leg injury, Franco Morbidelli struggled to keep the rhythm going throughout the 20-lap race at the Circuit of The Americas (COTA). He finished the race in 19th place.

Quartararo had a great start from second on the grid and slotted into second place through the first corners. He was leading the pack chasing Marc Marquez. The Frenchman wouldn‘t let the race leader out of his grasp in the opening laps, keeping the gap under 0.5s at all times. However, at the start of lap 6 Jorge Martin put pressure on the Yamaha man. El Diablo held firm but lost crucial time.

For a couple of laps the number-20 rider couldn‘t relax for a moment, trying to reel in Marquez once more and defending second place at the same time, but in the end he managed to break away from Martin. The resulting bit of breathing space allowed him to focus on his rhythm and he sped to the chequered flag to take second place, 4.679s from first.

Morbidelli started the Texan race from 13th on the grid and smoothly negotiated the tight first corners in the busy mid-field. He completed the opening lap in 15th place. He engaged in battles with pursuers Miguel Oliveira, Andrea Dovizioso, Aleix Espargaró, Iker Lecuona, and Valentino Rossi and was not able to defend his position. However, due to three riders crashing, the number-21 rider was holding 17th by the mid-way stage.

Eager to be competitive, the still injured Morbidelli gritted his teeth, trying to put in consistent lap times. But the physically demanding layout of the Circuit of The Americas added to the discomfort of his injured left knee. He lost places to Danilo Petrucci and Takaaki Nakagami and ultimately finished in 19th place, 49.854s from first.

After today’s results, Quartararo’s lead in the championship stands at 52 points, with a 254 points total. Teammate Morbidelli remains 17th in the rankings with 40 points. Monster Energy Yamaha MotoGP go to second place in the team standings with 349 points, and Yamaha hold on to second in the constructor championship with 282 points.

The Monster Energy Yamaha MotoGP Team will be back in action at the Misano World Circuit Marco Simoncelli again in three weeks‘ time for the Gran Premio dell’Emilia-Romagna, held from 22-24 October, where Quartararo will have his first chance to be crowned 2021 World Champion.

You can imagine how happy I am! I think that we managed to do a really great job. This morning I tried the soft rear, and honestly that was not really a race option for us all weekend, but I felt good. The first 12 laps of the race were the toughest, when I tried to make a gap between me and Jorge. And we did it. This is the best second place that I‘ve ever gotten in my life. It‘s even better than a victory, to be honest, because I‘m getting closer to my dream. It was so emotional because there are only three races left, and I have an over 50-point advantage. At least we made this long flight to leave here with a great result. I will now go back home and relax with my family for a few days. I will enjoy those moments with them a lot. I think that we are starting to think in a different way now, because the championship‘s end is getting closer. This is my first time really talking about it, but things are looking good.

The race was very, very tough. I wasn‘t in the condition to fully perform in the race because this track is really demanding on the body and I‘m still recovering, and 20 laps here with my physical condition were really tough. At some point I was just trying to get the bike to the end. At the beginning of the race, when I was still able to, I wanted to push a little and make some more kilometres to learn and adapt more to the bike. We got some interesting information that we can analyse, and we can do something with it for Misano. The next GP weekend is in three weeks, so I will have some more time to heal and prepare for that race. This is positive, and overall it was a positive weekend. We understand better which direction to take. Of course, the result is not what we wanted, but this is like a pre-season for us. We have to see it in this way. We are collecting interesting data for the next races.