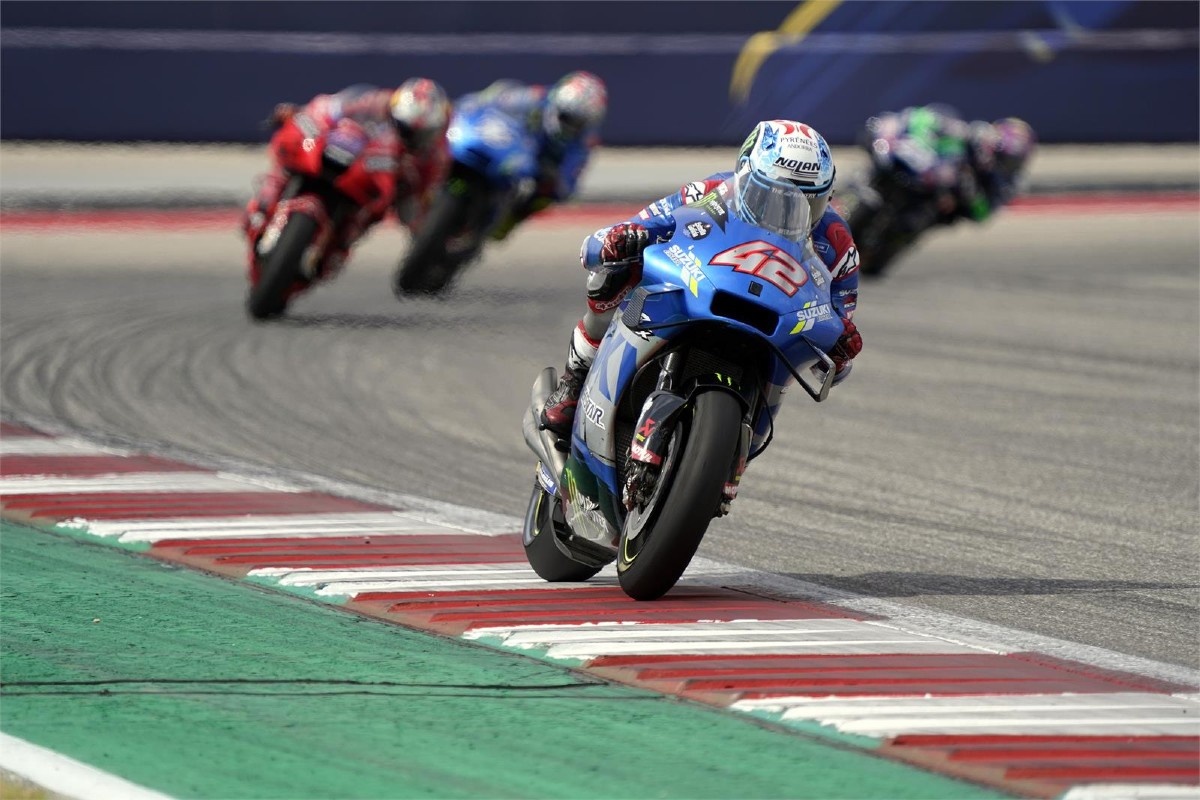 Team Suzuki Ecstar were pleased to once again experience the unique atmosphere the USA offers ahead of lights out for round 15 of the World Championship; the ‘Americas GP’. The high temperatures, excited crowd, and a powerful rendition of the National Anthem all added to the buzz around COTA on the outskirts of Austin.

Alex Rins and Joan Mir managed rocket starts off the line with their GSX-RRs, and impressively pushed into fourth and sixth in the first corners. Both choosing the hard-soft tyre combination, the pair hoped to charge through the pack early in the 20 lap race. Rins was quick to place himself into podium contention as he moved third before the end of lap 1.

The leading pack was a decent size with the first half a dozen riders all running close together for the first seven or eight laps. But as the race progressed, gaps started to appear, and the Suzuki duo found themselves slipping a little. On the 10th lap, Rins was sixth and Mir seventh, but the dynamics of the race were constantly changing and both riders were keen to keep in contention.

Despite settling into a steady rhythm, Rins and Mir were still ready to do battle to secure the best positions possible. Rins passed Jack Miller to take fifth and with four laps left found himself in a comfortable space. Meanwhile Mir was closing in for sixth but a big battle with Miller and Enea Bastianini saw him finish in seventh; he was later demoted to eighth for a moment on the last lap that was deemed irresponsible. Rins made up one position on the last lap after Jorge Martin took a long lap penalty; this meant he was able to bring home a nice fourth.

Today was a very difficult race for me, I struggled a lot, it was so hot and physically tough for everyone. Coming out of the slow corners I was losing time – I’m not sure if it was rear grip, or something in the set-up, but I struggled to accelerate out of the corners. But on the more flowing and faster corners I felt good and I was able to hold the speed and fight better. We chose the soft rear, like everybody else, because it seemed to be the best option to enter the fight with the same weapons. In the end it’s hard to tell whether another choice may have worked better, but I’m glad I was able to get fourth – it’s not so bad and I could bring home some nice points.

All race long I was trying to gain positions and make overtakes, but due to some issues with acceleration and traction I wasn’t really able to do it easily and I had to push really hard. I’m sorry for the touch with Jack (Miller) at the end of the race, I understand why he was angry, but it’s a shame I had a penalty because it was not a deliberate hit, of course. I hope in the future we can be more competitive, because I don’t want to be in these types of fights with another rider, I want everything to be clean and to be able to make passes more easily and battle with the lead group. Anyway, today I’m eighth and that’s just how it is. I’m ready to focus on Misano.