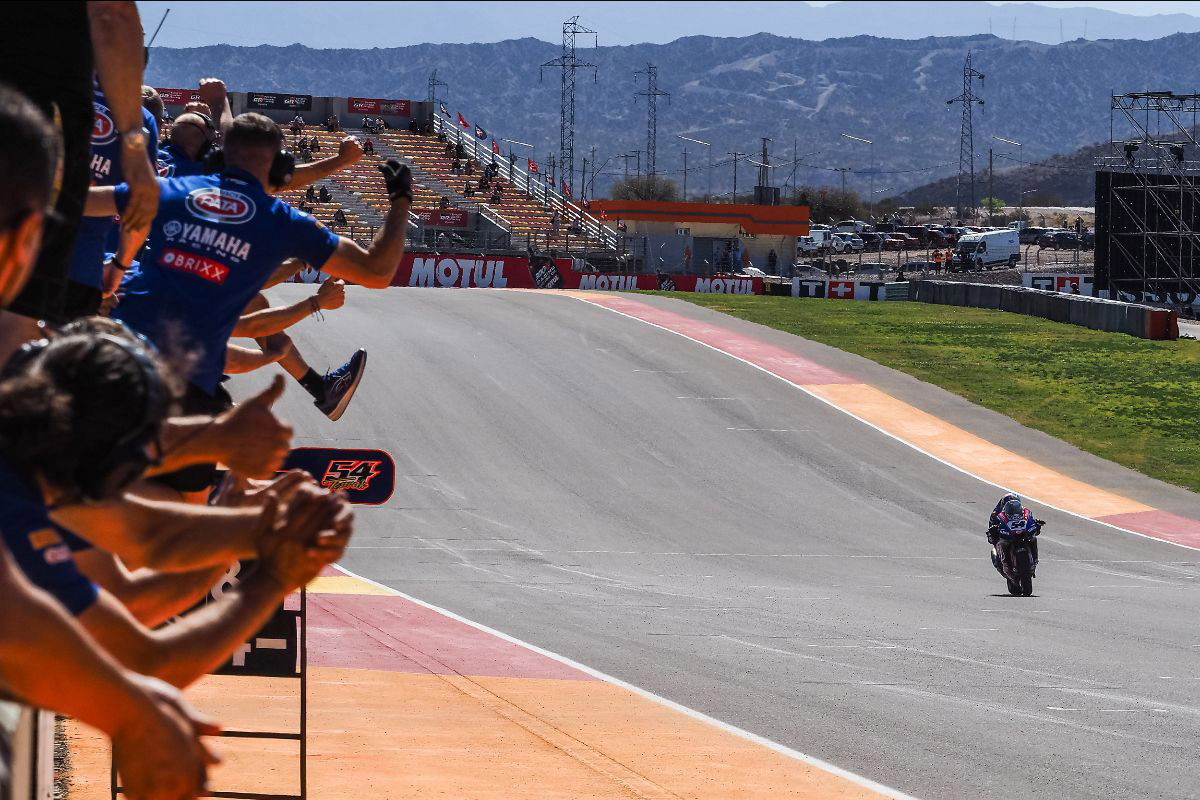 The MOTUL FIM Superbike World Championship descended on the Circuito San Juan Villicum for the Motul Argentinean Round and it was Toprak Razgatlioglu (Pata Yamaha with Brixx WorldSBK) who claimed Race 1 honours after a 21-lap encounter after transferring his scintillating Friday pace into Saturday action, claiming the 50th podium of his career on his 25th birthday.

Both Razgatlioglu and Jonathan Rea (Kawasaki Racing Team WorldSBK), decorated in a special 1990s livery to mark a special anniversary for Kawasaki, got quick starts from second and fifth on the grid respectively to lead the race into Turn 1, while polesitter Scott Redding (Aruba.it Racing – Ducati) found himself on the ground at Turn 1 after crashing, with the Briton falling to the back of the grid.

Out in front and Rea had put pressure on Razgatlioglu for the lead of the race before the Championship leader opened up the gap to Rea to just over three seconds at the end of Lap 8, with the pair holding station until the end of the race. Razgatlioglu’s win meant he claimed the 50th podium of his career while Yamaha claimed their first podium at San Juan Villicum. Rea’s second place meant he claimed Great Britain’s 810th podium, while it was only the second time Rea has not won at the Argentinean venue.

Michael Ruben Rinaldi (Aruba.it Racing – Ducati) claimed the tenth podium of his WorldSBK career with third place after passing Axel Bassani (Motocorsa Racing) at around half-distance of the race. Bassani had started from the front row for the first time in his WorldSBK career but fell back at the start before fighting back into third, before Rinaldi was able to pass him. Rinaldi’s podium was Ducati’s 980th podium in WorldSBK.

The first race of the FIM Supersport World Championship’s first visit to the Circuito San Juan Villicum since 2019 was won in a dominant display by French rider Jules Cluzel (GMT94 Yamaha) as he kept up his record of winning every race at San Juan Villicum with a five-second margin as racing got underway for the Motul Argentinean Round.

As the lights went out for the 19-lap race, Cluzel briefly lost the lead of the race into Turn 1 to the fast-starting Can Öncü (Kawasaki Puccetti Racing) as he out-braked Cluzel into the opening corner but found himself behind the Frenchman after Turn 2 as Cluzel struck back. The pair were able to build a gap to the chasing pack, which was headed by Steven Odendaal (Evan Bros. WorldSSP Yamaha Team) in the opening couple of laps.

Manuel Gonzalez (Yamaha ParkinGo Team) soon found himself ahead of Odendaal before Championship leader Dominique Aegerter (Ten Kate Racing Yamaha) made a move on his title rival for fourth place into Turn 1 at the start of Lap 4. From there, Odendaal found himself going backwards after running wide on a couple of occasions.

Cluzel was able to resist the early challenge from Öncü to maintain his lead throughout the 19-lap race as he claimed his second victory in three races and his third at the San Juan Villicum venue, maintain his perfect record in Argentina. Gonzalez and Öncü spent a few laps battling with each other for second place, with Gonzalez making the crucial move on Lap 13 at Turn 1. Cluzel’s victory meant he claimed his 60th podium in WorldSSP while it was also Yamaha’s 115th win. Öncü claimed his second podium of his WorldSSP career and became only the second non-Yamaha rider to finish on the podium at San Juan Villicum after Lucas Mahias in 2019.

Odendaal battled his back way through the field to finish in fourth place after passing Aegerter on Lap 14 at Turn 8, but the South African was unable to pull away and Aegerter kept the pressure on, setting his personal best lap time on the penultimate lap. As the final lap started, Aegerter made a move at Turn 1 but ran wide, allowing Odendaal to keep fourth place with Aegerter in fifth.

#ARGWorldSBK
Get All Our Latest News Sent Direct To Your Inbox
Join 30,253 other subscribers.
Follow on Social Media
Get the VROOM Podcast