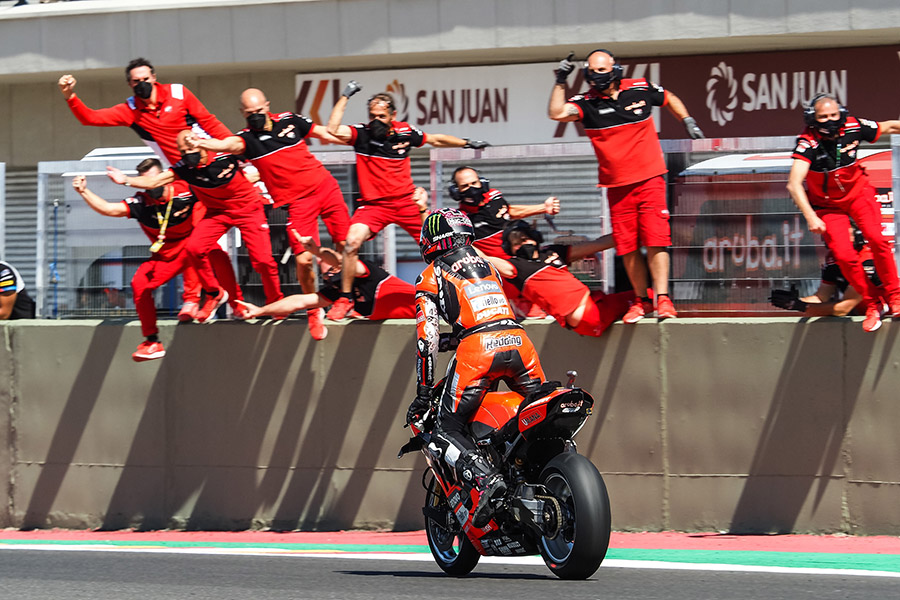 Race 2 for the MOTUL FIM Superbike World Championship at the Circuito San Juan Villicum as the Championship top three engaged in a hard-fought 21-lap battle during the Motul Argentinean Round as Scott Redding (Aruba.it Racing – Ducati) claimed his first victory since the Catalunya Round after withstanding a challenge from Jonathan Rea (Kawasaki Racing Team WorldSBK) and Toprak Razgatlioglu (Pata Yamaha with Brixx WorldSBK), with Rea taking four points out of Razgatlioglu’s Championship lead.

Jonathan Rea (Kawasaki Racing Team WorldSBK) got a good start from third on the grid while Toprak Razgatlioglu (Pata Yamaha with Brixx WorldSBK) led from pole position before the pair battled it out throughout the first three laps, with Rea taking the lead of the race briefly before being pushed down to third on the fourth lap of 21.

Redding moved up to second with a pass on Rea before passing Razgatlioglu into Turn 8 on Lap 5, while Axel Bassani (Motocorsa Racing) continued his strong form as he battled the Championship’s top three for a podium position. Rea was able to respond to move into second and looked to move back into the lead, but the Turkish start was able to resist that challenge on Lap 6. At the start of Lap 9, Redding made a move on Rea into Turn 1, with Razgatlioglu still out in front, although Redding did make a move into Turn 8 with Razgatlioglu responding instantly.

The FIM Supersport World Championship title race came to a dramatic conclusion at the Circuito San Juan Villicum during the Motul Argentinean Round as Dominique Aegerter (Ten Kate Racing Yamaha) was crowned 2021 Champion with a third-place finish, as Jules Cluzel (GMT94 Yamaha) maintained his perfect record at San Juan Villicum with another commanding victory, making it four out of four in South America.

Cluzel and Can Öncü (Kawasaki Puccetti Racing) both got good starts as the lights went out, as did Steven Odendaal (Evan Bros. WorldSSP Yamaha Team) but the South African rider, who needed to outscore title rival Dominique Aegerter (Ten Kate Racing Yamaha) by at least three points to keep the Championship going to Indonesia, found himself on the floor after Turn 1 contact with Manuel Gonzalez (Yamaha ParkinGo Team); the incident placed under investigation by the FIM WorldSBK Stewards. With Odendaal having to fight his way back through the field, Aegerter was crowned World Champion after finishing in third place, his first World Championship title in his rookie WorldSSP campaign. Odendaal’s fightback ended on Lap 13 from 14th place after crashing at Turn 15.

The incident allowed Cluzel and Öncü to battle it out at the front of the field in the early stages of the 19-lap race, with Cluzel under pressure from the Turkish star. As the race entered the second half of the race, Cluzel started to pull away from Öncü and went on to claim his fourth victory at the San Juan circuit; maintaining his 100% record in Argentina. Öncü was able to hold second place for his second consecutive podium and third of his WorldSSP career.

Peter Sebestyen (Evan Bros. WorldSSP Yamaha Team) was a beneficiary of the incident at Turn 1 as he moved into third place as he looked for his maiden podium, but soon found himself under pressure from Aegerter and Finland’s Niki Tuuli (MV Agusta Corse Clienti). Both were able to make their way past the Hungarian rider.

Aegerter would go on to claim third place after dropping to ninth at the start following the Lap 1 incident to secure his first WorldSSP Championship with a podium finish, becoming the second Swiss rider in three years to claim the title. It was also Ten Kate Racing’s tenth WorldSSP title and their first with Yamaha. Hannes Soomer (Kallio Racing) battled his way through the field to claim fourth place after a late move on Sebestyen, with the Hungarian rider coming home in fifth place after a strong weekend; the first top-five for a Hungarian rider since Imre Toth at Monza in 2012 who finished fourth, while it was also Sebestyen’s best result of the campaign.

#ARGWorldSBK
Get All Our Latest News Sent Direct To Your Inbox
Join 30,271 other subscribers.
Follow on Social Media
Get the VROOM Podcast