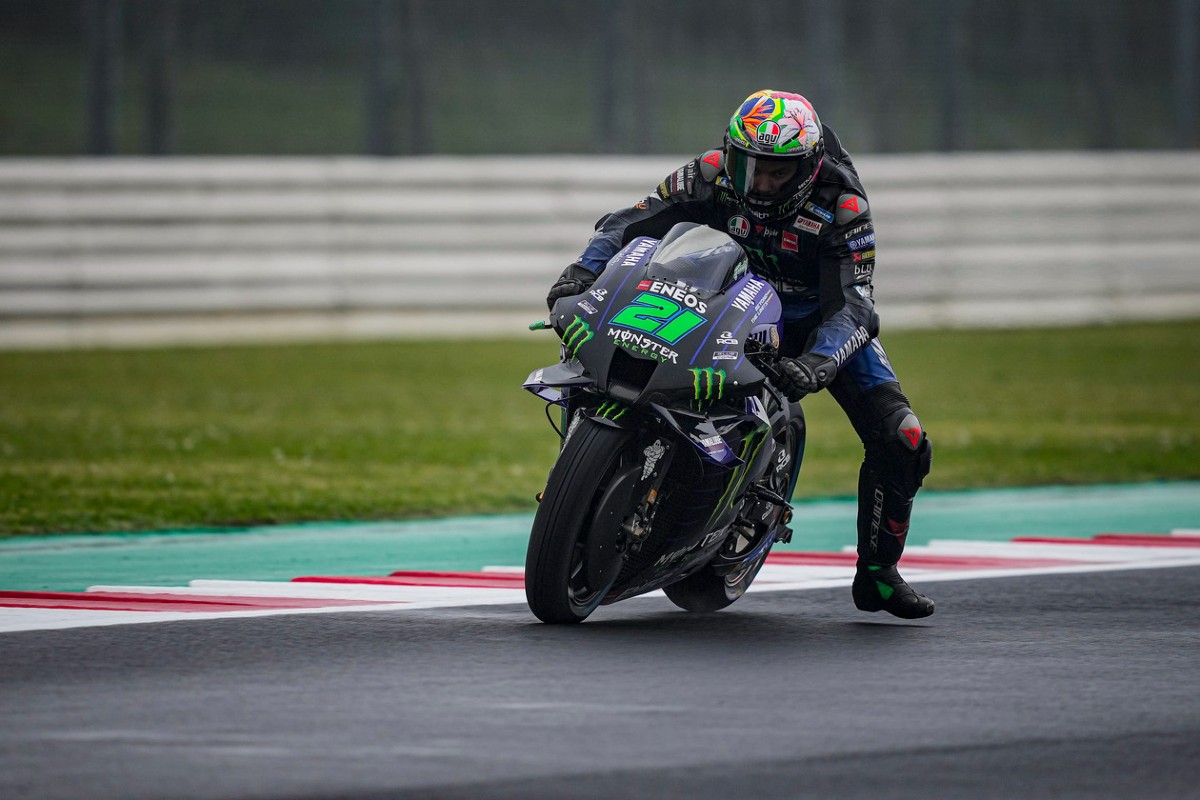 Monster Energy Yamaha MotoGP’s Franco Morbidelli pushed hard at the Misano World Circuit Marco Simoncelli this afternoon, earning himself a sixth place starting position for tomorrow’s Gran Premio del Made in Italy e dell’Emilia-Romagna. The second-row start is his first top-12 placement since his return from injury. Fabio Quartararo was on route in Q1 to secure a spot in Q2 but just missed out. He will start from 15th on the grid.

Morbidelli’s hard work on Day 1 and this morning earned him a place in Q2. Following another solid performance in FP4, he was motivated to get some hot laps in despite the somewhat chilly conditions. He started his charge with a 1’39.244s whilst discovering where he could push on the half-wet, half-dry track. His second attempt was a 1’35.060s that moved him up to fourth place before he entered pit lane with seven minutes remaining.

The Italian resumed his challenge two and a half minutes later. He had dropped to ninth and was keen to start pushing as soon as his fresh slicks had heat in them. However, yellow flags caused his next flying lap to be cancelled. But the cool-headed Yamaha man dug deep and set a 1’33.526s on his last lap to take sixth on the grid, 0.481s from first.

Unable to secure a top-10 placement in this morning’s FP3, Quartararo had to take part in Q1. He had used FP4 to the fullest to get a good sense of the track in drying but still damp conditions and decided to let the majority of the riders head out of pit lane ahead of him for the 15-minute shoot-out. His 1’37.593s benchmark lap temporarily put him in first place. But with track conditions improving, he couldn’t relax for a second.

El Diablo was fighting determinedly, moving back up into the top 2 with almost every lap he posted. Not having to come in to change tyres, he was able to keep pushing for the duration of the session until he had to roll out on his sixth attempt due to yellow flags. With over two minutes remaining, there was time for two more tries. He used the first one to bring heat back into the tyres before he attacked, but with yellow flags out again, his 1’34.411s last lap was cancelled. Quartararo ended Q1 in fifth place with a 1’34.476s, 1.083s from first, and will start tomorrow’s race from P15.

It was a good day for us. The team did a wonderful job in doing the right moves at the right time and making the right modifications on the bike. I was feeling better than yesterday already on the bike, so we made good steps. This morning I was able to go directly into Q2, which is what we were hoping for. In the wet it was really difficult, but we managed to do it anyway. And this afternoon again, we did a good qualifying in tricky conditions. So, this means I’m feeling better with the bike, and this is positive. Everything we wanted to do and planned to do from Austin to here has happened. Now, we will have to see tomorrow what the weather will be like, and we will have to try to improve also in the race.

I tried everything I could in FP3 to go directly into Q2, and we didn’t finish so far from the top 10. We made a massive improvement on the wet, but this afternoon the conditions were exactly what I hate, so I knew Q1 would be a tough job. In the end, I finished 3rd in Q1 before the lap was cancelled. It’s not what I expected because I had some struggles in mixed conditions, and I didn’t take enough risk in the last two sectors. But that’s understandable. I’m on the cautious side: I won’t take too many risks with wet patches. In the end I will start from P15. I’m not too worried about it. Of course, I didn’t want to be in this position, but now that I am, I’ll need to make a great start and some great overtakes, and we will see what happens. Tomorrow we will also see which tyres we will use for the race.