Pole for Pecco Bagnaia at the #EmiliaRomagnaGP, Jack Miller 2nd 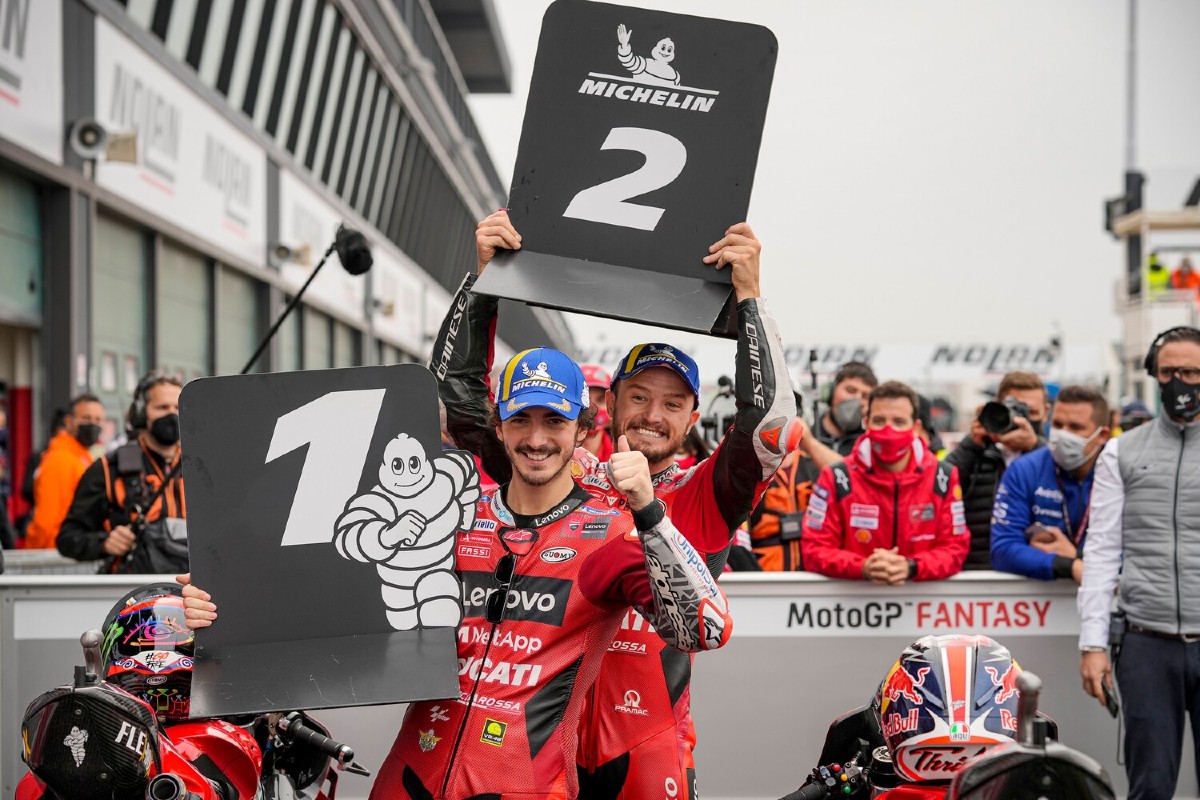 It will be Pecco Bagnaia, for the fourth consecutive time this season, to start from pole position in the Grand Prix of Made in Italy and Emilia Romagna, scheduled for tomorrow afternoon at the Misano World Circuit “Marco Simoncelli”.

The Ducati Lenovo Team rider was the protagonist of another sensational qualifying session. After finishing eleventh at the end of the first three wet free practice sessions, Bagnaia proved to be very competitive on slick tyres, finishing second in FP4 and then gaining access to Q2 by taking first place in Q1. Despite the tricky track conditions, with some wet patches still present on the asphalt, the Italian rider continued to push without making mistakes, confirming to be the fastest also in the last decisive session of qualifying, securing the first position and a front-row start for the tenth time this season.

It was an excellent qualifying for Jack Miller too, who, after finishing Friday on top, went straight into Q2 after setting the third fastest time overall at the end of FP3. In qualifying, on slick tyres, the Australian rider was once again very fast, finishing just 25 thousandths from his teammate’s pole position. This is the third time this year that the Ducati Lenovo Team duo has started side by side from the first two positions on the grid. Completing a great qualifying for Ducati in its home Grand Prix, Sky Racing Team VR46 rider Luca Marini finished with the third-fastest time, earning his first front-row start in MotoGP. For the Bologna-based manufacturer, it will also be the first time three Ducati Desmosedici GP machines will start ahead of the rest of the field in a MotoGP race.

On the other side of the garage, it was an unlucky day for Michele Pirro. The Ducati Test Team rider, who is taking part in the GP at Misano this weekend as a wild card, will be forced to start only 22nd in the race as a crash in Q1 prevented him from improving.

To get pole position in my home Grand Prix, in front of my fans, is a fantastic way to end Saturday! This morning, I felt really comfortable with the used wet tyres, but with the new ones, I struggled more and couldn’t go straight into Q2. Maybe being in Q1 was better for us because it allowed us to do more laps on slick tyres and see our potential. That gave me more confidence to push harder in the following session and take pole. I hope we can have a dry race because I feel I’m very competitive there, but in general, we’re ready to fight in any condition.

I’m satisfied with the result today in qualifying: we finished really close to Pecco’s pole position, and the front row is always a great position to start from. Overall, it was a fantastic day, both for the team and Ducati, with Marini in third. Tomorrow we’ll try to repeat the result, but for sure, we have a very tricky race ahead of us. The track will probably be dry, and we haven’t had a chance to ride in similar conditions all weekend. Also, we won’t be able to rely much on the data we gathered in the September race or during the two days of testing, considering the lower temperatures this weekend. We’ll be heading into the unknown, but we’ll try to do our best.

Today didn’t go as I hoped, and I’m pretty disappointed. I crashed both this morning and this afternoon, compromising my qualifying. I apologise to my team, who unfortunately will have extra work to do tonight. I will try to do my best in the race tomorrow to repay their trust. Fighting for the top ten will be really difficult because I’ll be starting very far back, but I’ll try to have a good race to entertain all the fans that will be watching the race from trackside.

The Ducati Lenovo Team riders will be back on track tomorrow at 10:00 am local time for the warm-up, while the race will get underway at 2:00 pm Italian time over a 27-lap distance.

#EmiliaRomagnaGP
Get All Our Latest News Sent Direct To Your Inbox
Join 30,253 other subscribers.
Follow on Social Media
Get the VROOM Podcast