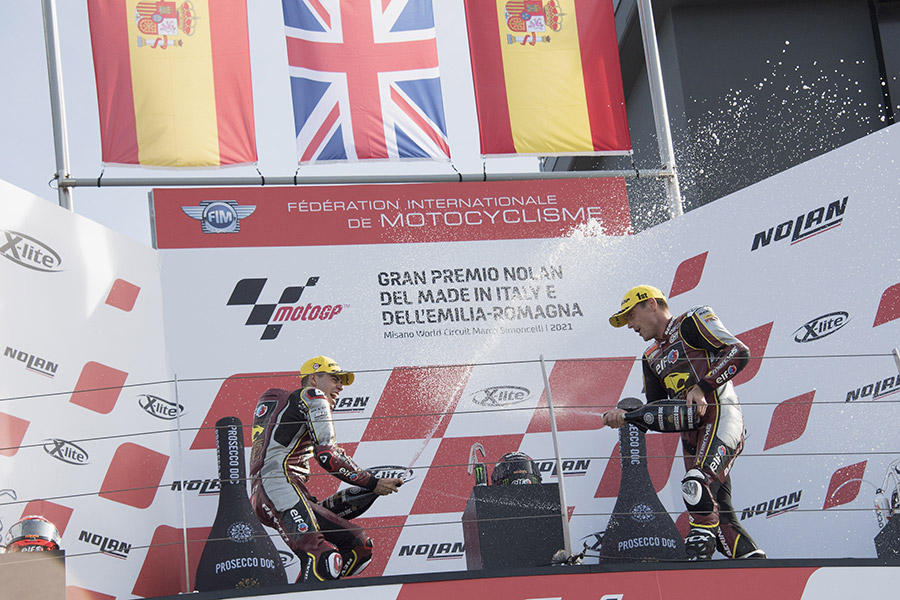 After a dramatic race, Sam Lowes took his third Moto2 win of the season while Augusto Fernandez produced a stunning comeback to clinch second place on the exit of the final corner.

After a weekend of rain and cold conditions, blue skies and warm temperatures of 20 degrees greeted the riders at the Misano World Circuit Marco Simoncelli for the 16th round of 2021.

It was a fantastic day for Elf Marc VDS Racing Team with Sam Lowes winning his first race since April and Augusto Fernandez taking second for the team’s first 1-2 finish in the Moto2 class since the 2017 Austrian GP.

After the team notched up its 50th Moto2 pole position on Saturday, this was the seventh time in Moto2 history that Marc VDS riders have finished 1st and 2nd in the same race. The 2013 French GP, the 2014 Qatar, Czech, British and San Marino GPs and the 2017 Austrian GP were the other occasions.

Augusto’s third place in qualifying was undermined by a Long Lap Penalty, which he served on the second lap. That dropped the 23-year old from 4th to 14th.

But from there he produced a stunning comeback through the field, posting a succession of fastest laps with the fastest of the race coming on lap 20.

Fernandez carved his way through to 3rd place by the final lap, and then made a fantastic overtake on Aron Canet out of the final corner to take 2nd, his best result since September, 2019.

Augusto’s fifth podium of the season consolidates his fifth place in the championship with 151 points.

Augusto Fernandez
“It was really fun! I enjoyed that one but it was difficult. Since I found out I had a penalty I always believed it was possible to do something like that! Of all the races for that to be possible it was this one, because I felt good all weekend in all kinds of conditions. I did the Long Lap Penalty at the beginning. I had the mentality that I was starting from 14th or 15th, like I did in Aragon. I just focussed on my riding and my pace and then started overtaking riders one-by-one. At the end I lost a bit of time with (Celestino) Vietti and spent three or four laps behind him, otherwise I could have maybe fought in the last laps at the front with Sam and Aron. Anyway, being on the podium after the penalty is amazing. I’m very, very happy!”

After taking his 17th pole position on Saturday, the highest number for any rider in the Moto2 class, Lowes was involved in an exciting early battle with Aron Canet.

Lowes lost the lead to Raul Fernandez on lap 14, and then made a mistake at turn eight on lap 18, which allowed Canet back through to lead.

But the Englishman dug deep in the final laps and retook the lead from Canet with a brilliant move at turn two on the 22nd lap and went on to win by 1.2s.

Lowes’ 3rd win of the season and 4th podium sees him remain fourth in the World Championship, with 165 points.

Sam Lowes
“I’m really happy with this result after some races when I had good potential but didn’t get it on the Sunday. It’s really important to finish this year strong to carry momentum into next season. To get the win after starting from pole position was nice. Every time I put slicks in the bike this weekend, I felt good. We gambled a bit with the soft front. The last few laps it was on the limit, because I had never done more than ten laps on that tyre all season! It was like being in unknown territory. But the conditions this weekend were complicated for everybody. No one had the perfect package because no one did race distance on the soft rear tyre before today. It was the correct choice and in the first 15 laps it was the safer option. It gives me nice confidence I could control it at the end and bring it home. The team did a great job. They made the best out of a difficult weekend and took the little information that we had and made a good choice. Thanks to them for the ongoing support. It’s nice to bounce back from a difficult race in Austin with a win to try and finish the year in a good way.”