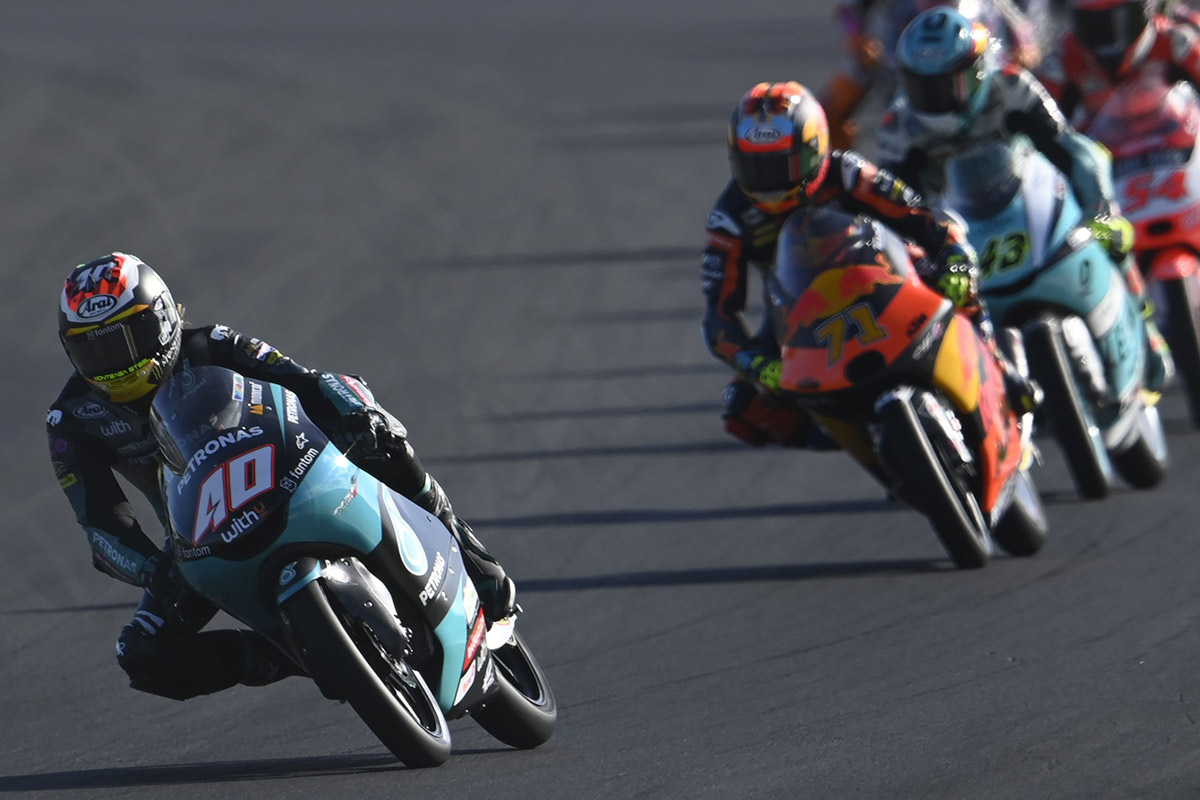 There were mixed fortunes for PETRONAS Sprinta Racing at the second Moto3 race of the year at Misano, with Darryn Binder making his way through from 16th to fourth and John McPhee crashing out of the Gran Premio Made in Italy e dell’Emilia Romagna on lap 9.

Binder had a strong start to the race, making his way from 16th on the grid to tenth by the end of the opening lap, and was in seventh by the third lap. Setting fastest laps early on, the South African was in the thick of the podium fight at the halfway point. Darryn looked set to claim a podium finish, but was caught in the final laps and ultimately missed out, crossing the line fourth. With 136 championship points, he sits sixth in the championship standings.

A steady start from 12th saw McPhee drop down to 15th in the opening corner, but he managed to recover two places by the end of the first lap. Battling hard with those around him, the Scot found himself slipping backwards as the race unfolded. Unfortunately the race came to an early end for John, after a Turn 1 crash on Lap 9. McPhee leaves Misano 13th in the riders’ standings with 72 points.

Binder and McPhee will now have a two-week break before the final two rounds of the season get underway, starting with the Grande Prémio do Algarve (5-7 November).

It was a strange race because the first time we got out on the slicks was the out lap going to the grid! Going into the race I was confident because I had a good race here last time and I knew that our set up was good in the dry. I started off in the group and made my way to the front slowly. When Dennis [Foggia] arrived at the front I knew he would have good pace, so I got behind him. However, I felt like I was pushing just to hang on to the back of him and unfortunately when I avoided [Izan] Guevara’s crash it broke the slipstream. I’ve been struggling with speed and I started drifting back. I was hoping I could hold on to a podium, but it wasn’t possible. Fourth is a bit disappointing but at the end of the day it is what it is.

It’s been a tough weekend. I was laying in bed all day Friday thinking that I wouldn’t be able to ride, so I was really happy that I could swing my leg over the bike yesterday. I was struggling in the first couple of laps today, not feeling 100%, and maybe it would have been better to stop then. I don’t know what happened with [Riccardo] Rossi but I hope he’s okay and I definitely didn’t mean to make contact. After that I was struggling with the front and unfortunately Turn 1 caught me out: The crash was my mistake. It was a difficult weekend but at least I’m starting to feel better and we’ll definitely come back stronger for Portimao.

#EmiliaRomagnaGP
Get All Our Latest News Sent Direct To Your Inbox
Join 30,246 other subscribers.
Follow on Social Media
Get the VROOM Podcast