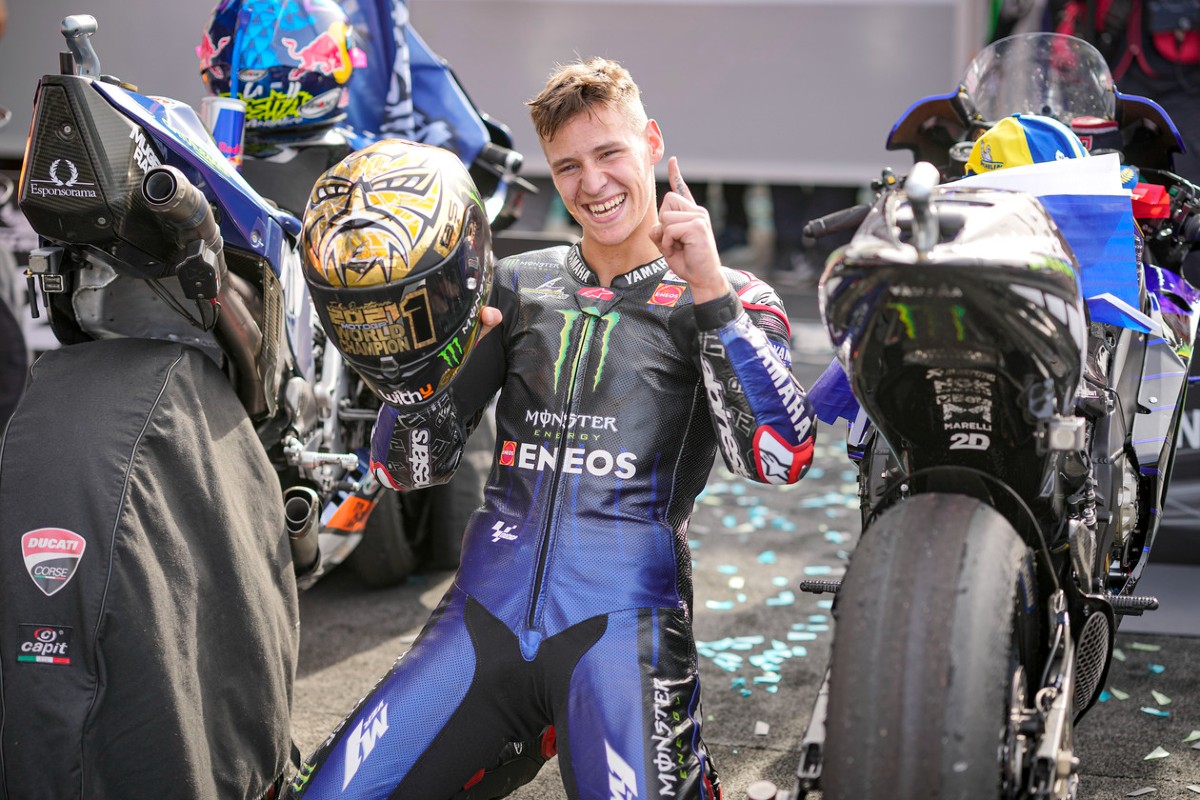 Fabio Quartararo held his nerve at today‘s Gran Premio del Made in Italy e dell’Emilia-Romagna and rode from P15 to a brilliant fourth place. By relentlessly keeping the pressure on his rivals, he earned the 2021 MotoGP World Championship Crown. Franco Morbidelli‘s true potential as a top-level rider shone through in the first half of the 27-lap race. However, fatigue meant he had the slow down in the latter stages. He finished in 14th place.

Quartararo had a cautious start from P15 on the grid and slalomed through the opening corners in 17th place, but he soon commenced his charge to the front. After six laps, he found himself inside the top 10.

El Diablo kept pushing, knowing every point could be crucial in his championship challenge. Stalking Alex Rins, they together overtook Jorge Martin and continued to ride to the front. On lap 13, the pair joined the group battling for fifth place. Two laps later Quartararo found a way through on his teammate and Luca Marini. And with ten laps to go, he also overtook Rins in Turn 4 for sixth place.

The Frenchman‘s race pace in the latter stages was as good as it had been in the San Marino GP in September. He was rapidly closing in on Aleix Espargaro and had the fans on the edge of their seats during his duel with the Aprilia rider, but he managed to keep it short and quickly opened a gap.

Quartararo was now in fifth place, and the title challenge seemed to be moved forward to Portimao, but the sting was in the tail of the Emilia-Romagna GP. With Francesco Bagnaia and Miguel Oliveira crashing out in the final five laps, Quartararo was suddenly in third place. He was keen to secure his championship title with a podium finish, but when Enea Bastianini loomed up behind him, the Yamaha man decided to make do with a fourth-place finish, 12.775s from first.

Morbidelli had a good start from sixth on the grid and defended his position tooth and nail in the opening lap. With Jack Miller crashing out on lap 4, he moved into the top 5. When a gap started to form between him and the rider in front of him, he shifted his attention to keeping a steady pace going despite his knee injury.

The Italian was put under pressure by Aleix Espargaro with 17 laps to go. The Yamaha man made his M1 as wide as possible but had to let his rival through a lap later. Fatigue in the leg made it hard for Morbidelli to defend his position. He gradually fell back to 14th place, finishing 42.830s from the front.

Thanks to today’s results, Quartararo won the World Championship Title with 267 points in total and a 65-point lead with two rounds to go. Morbidelli scored his first points after his return from injury and now has 42 points but stays in 17th place. Monster Energy Yamaha MotoGP return to the top in the team standings with 364 points, and Yamaha remains second in the constructor championship with 295 points.

The Monster Energy Yamaha MotoGP Team will be back in action at the Algarve International Circuit again in two weeks‘ time for the Grande Prémio do Algarve, held from 5-7 November.

To be honest, I still can’t believe what I achieved today… This feels so good! It wasn’t an easy race. On the first laps I saw Miller crash, but I thought it was Marc. Then I looked at the TV, and I saw that Marc was fighting with Pecco. Then I saw another red bike crashing. At that moment I wasn’t happy. I was just thinking ’Okay, Pecco crashed‘ and I‘m glad he is okay. To try to finish on the podium was a little bit the target, but our front tyre was in a bad shape by then, and I couldn’t make it in the end. But I don’t care. I became a World Champion today. I could have finished last, and the result would have been the same. I have no words. I just want to enjoy this moment with the team.

I’m happy with the overall performance we had this weekend. We improved a lot. I improved the feeling with the bike and for sure my condition was better, and I was able to be faster until midway through the race. Unfortunately, I’m not fit enough to maintain the pace of this level of racing yet. I needed to slow down and cruise around in the second half of the race. But we made some good steps, so I’m happy. I want to say ’Congratulations‘ to the team and to Fabio. They did a wonderful and amazing job this year. Fabio was really on point this season and really fast. He was really the best, so he deserves this championship, and he and the team deserve this kind of result.

#EmiliaRomagnaGP
Get All Our Latest News Sent Direct To Your Inbox
Join 30,253 other subscribers.
Follow on Social Media
Get the VROOM Podcast