Unlucky end to the #EmiliaRomagnaGP as Bagnaia and Miller both crash out, Pirro finishes 12th 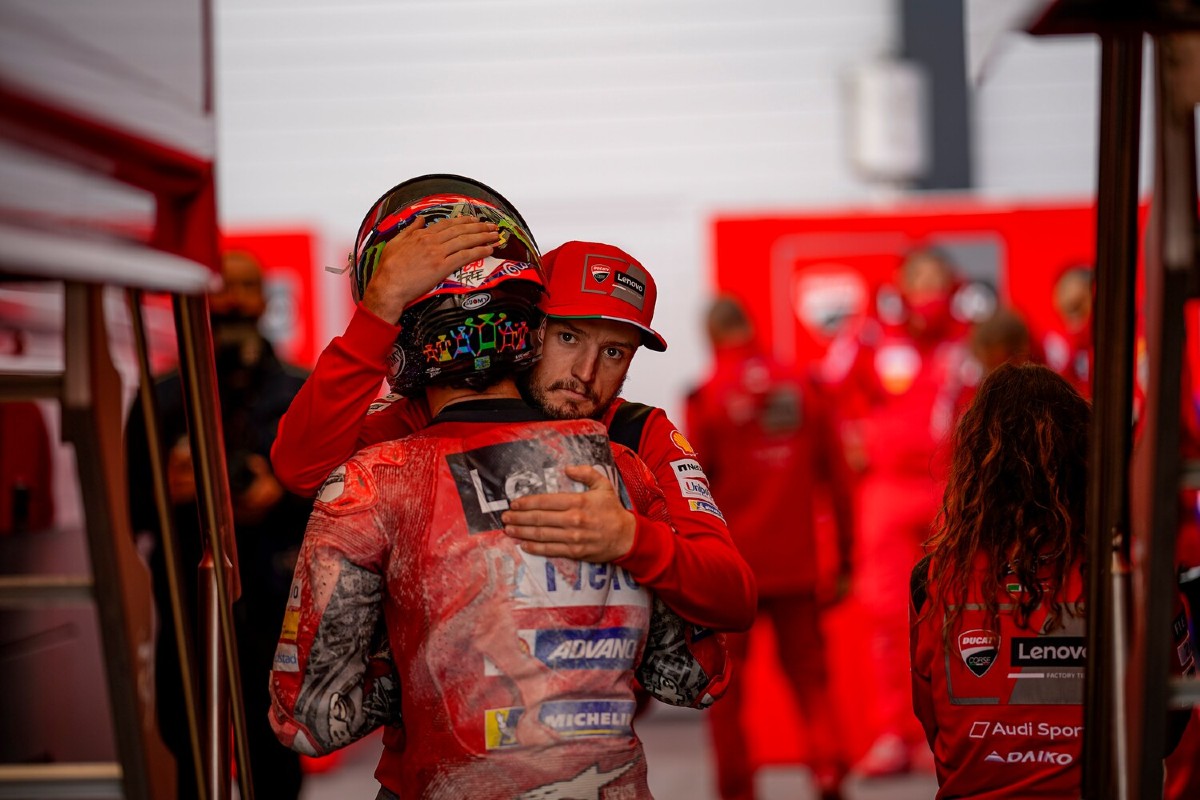 The Grand Prix of Made in Italy and Emilia Romagna had an unfortunate ending for the Ducati Lenovo Team riders, who were both forced to retire in this afternoon’s race at the Misano World Circuit “Marco Simoncelli”.

Starting from pole position alongside Jack Miller, second in yesterday’s qualifying, Pecco Bagnaia had managed to hold the lead after the start, followed by his teammate, who remained in second place. The two Ducati Lenovo Team riders immediately started to push, trying to gain ground on Marc Márquez, who was right behind them. However, Miller crashed on the fourth lap, ending his race prematurely.

Alone in the lead, Bagnaia continued to push and built up a small gap on the Spaniard with five laps to go, but on the same lap, he lost the front at turn 15 and was forced to retire. As a result of Pecco’s crash, Fabio Quartararo took the 2021 MotoGP title today, while the Ducati Lenovo Team rider remains second in the Championship. After the first sixteen rounds of the 2021 MotoGP season, Jack Miller is now fifth in the riders’ standings. Ducati continues to lead the Manufacturers’ Championship, while the Ducati Lenovo Team is second in the teams’ classification.

Today, I really gave my best to try and keep the Championship open, but unfortunately, that’s what happened. We were very competitive again this weekend, fighting for the win, and I’m happy with my performance today, even though I’m disappointed with the final result. Congratulations to Fabio: he deserved this title, which he came close to also clinching last year. We’ll continue to work to try to stay always at the front, and after this year, we will start next season with the same goal of aiming for the title.

We decided to use a hard front tyre for the race, but it probably didn’t turn out to be the best choice. Around 1 pm, the sky clouded over, and the temperatures dropped a lot lower than we expected. At Turn 8, I was quite close to Pecco; I braked hard, and maybe this could have affected the temperature of the front tyre. When I got to turn 15, I lost the front, and there was nothing I could do to avoid the crash. I am very disappointed, both for the team and me, but we gave our best all weekend. Now let’s move on. I am looking forward to finishing this season on a high.

Yesterday’s qualifying compromised my race, so the main goal today was to make up as many positions as possible. I’m disappointed that Jack and Pecco crashed because it wasn’t how we hoped to finish this weekend, but we gave it our all. The riders’ Championship is now closed, but we know we are strong and have the potential to try again next year. I want to thank all the guys in the Ducati Test Team for their work and all the fans who came to support us trackside this weekend.

The Ducati Lenovo Team riders will be back on track from 5th-7th November at the Autodromo Internacional do Algarve in Portimão to contest the Gran Premio do Algarve, the seventeenth round of the 2021 MotoGP World Championship.