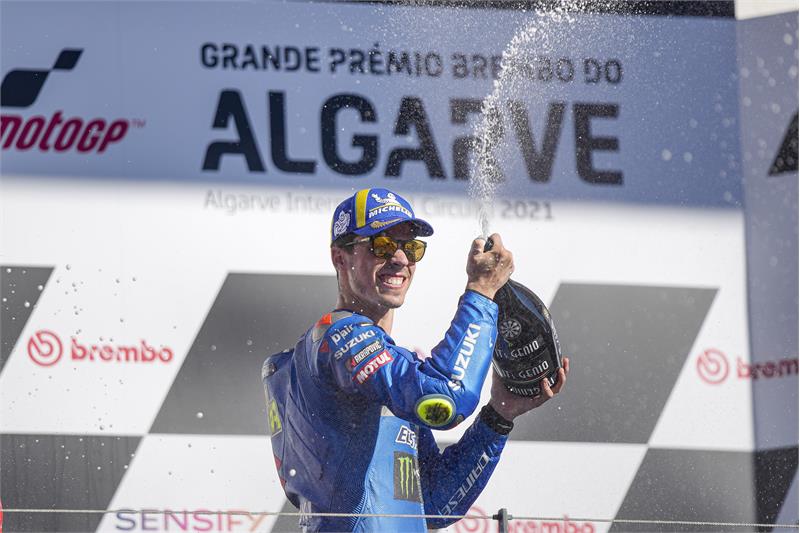 Team Suzuki Ecstar made a successful return to the Autodromo Internacional do Algarve, with both riders bringing home strong results and good points.

Joan Mir made a rocket start from his front row grid spot and immediately placed himself in a provisional podium position, before the riders had completed one lap, Mir was into second. He then went on to set the fastest lap.

Alex Rins struggled a little from his 11th place start position, slipping to 14th, but by the end of the third lap he had fought his way into 11th. As the race progressed he continued to gain places, moving up to ninth on Lap 10. He began to feel more comfortable in the latter half of the race and he was able to set some fast laps, but he was unable to get higher than eighth. However, this finish sees him in contention for a Top 10 spot in the championship standings.

Back at the front, Mir was doing his best to keep close to race leader Francesco Bagnaia, but this task became more and more tricky. He did well to keep the chasing riders at bay and put himself in a safe second where he could settle into his own rhythm and take the runner-up spot at the chequered flag. He is now confirmed third in the championship with one race remaining.

“I didn’t have enough pace to win here today, but I can’t complain! This has been the strongest weekend I’ve had for a long time – especially because I was fast from Friday morning onwards. I was able to fight hard today, but Pecco did an incredible race without any mistakes. He had a bit of a margin compared to me, and I couldn’t do more than second today. But nevertheless, I’m really pleased and I’m happy to give the team another podium. This also gives us hope for the future.”

“I didn’t have the best start, so I lost a lot of time. When I got into my race rhythm I was quite fast and I had nice pace, but it wasn’t enough. The qualifying result cost us today, so next week we have to do better on Saturday. Overall, my bike feels good and I’m feeling hopeful for the final race of the year in Valencia.”