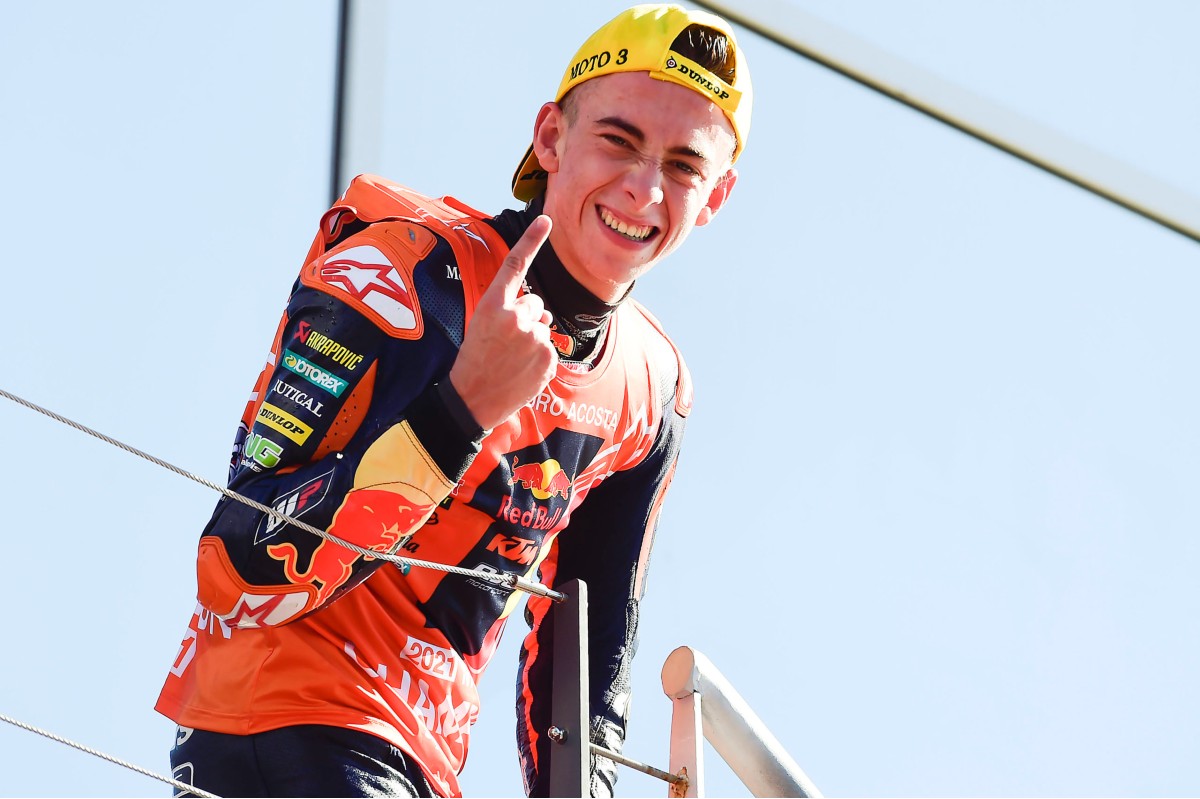 Pedro Acosta enjoyed a dream Sunday in Portugal, with victory at the Algarve Grand Prix proclaiming him Moto3 World Champion. The Red Bull KTM Ajo rider took his sixth triumph of the year, making history in the process by becoming the first rookie to win the Moto3/125cc title. The honour adds to Red Bull KTM Ajo’s Team title for 2021. Jaume Masia had an exceptional performance, leading the race, but suffered a crash with three laps to go and finished 19th.

Acosta started from 14th position on the grid, and got off the line strongly to beat several riders, moving into sixth on Lap 3 after passing eight rivals. Shortly after joining the leading group, he moved to the front of the field, but the intense overtaking moves during the following laps, caused positions to change constantly. With one lap to go, Acosta’s main rival for the title crashed and, after taking the chequered flag in first place, he was crowned Moto3 World Champion.

The Algarve Grand Prix began well for Masia, who took off from the second row. Despite giving up some positions when the lights went out, he quickly joined the leading group. The Red Bull KTM Ajo rider moved up the order within the group with a very competitive and consistent pace, to get to the podium spots. He would subsequently lead the race midway through, but lost a spot and then, eventually, crashed when in fifth place. Masia remounted to finish 19th.

Acosta is the new Moto3 World Champion with 259 points. Masia occupies fifth place with 155. The Red Bull KTM Ajo duo will return to action next week at the Valencia GP, for the last round of the year from November 12-14th.

Today we finally did it. We beat everybody. It was a very tough race because all the riders were very strong, and the aggressiveness was noticeable. At this time, I only have words of thanks. I want to thank my team, Aki [Ajo], Red Bull and KTM. I thank all of them for trusting that child who seemed as if he was going to make it. I also want to mention the people around me, all those who have been with me all winter. I have no words to express what I feel right now.

It has been a good weekend. The crash we suffered in the race was a shame, because we were doing very well. I am happy with the good work we have done and with how we have felt throughout the round. At Valencia we will try to fight to get a positive result to round off the year. I want to congratulate my team mate, who has had an incredible season.