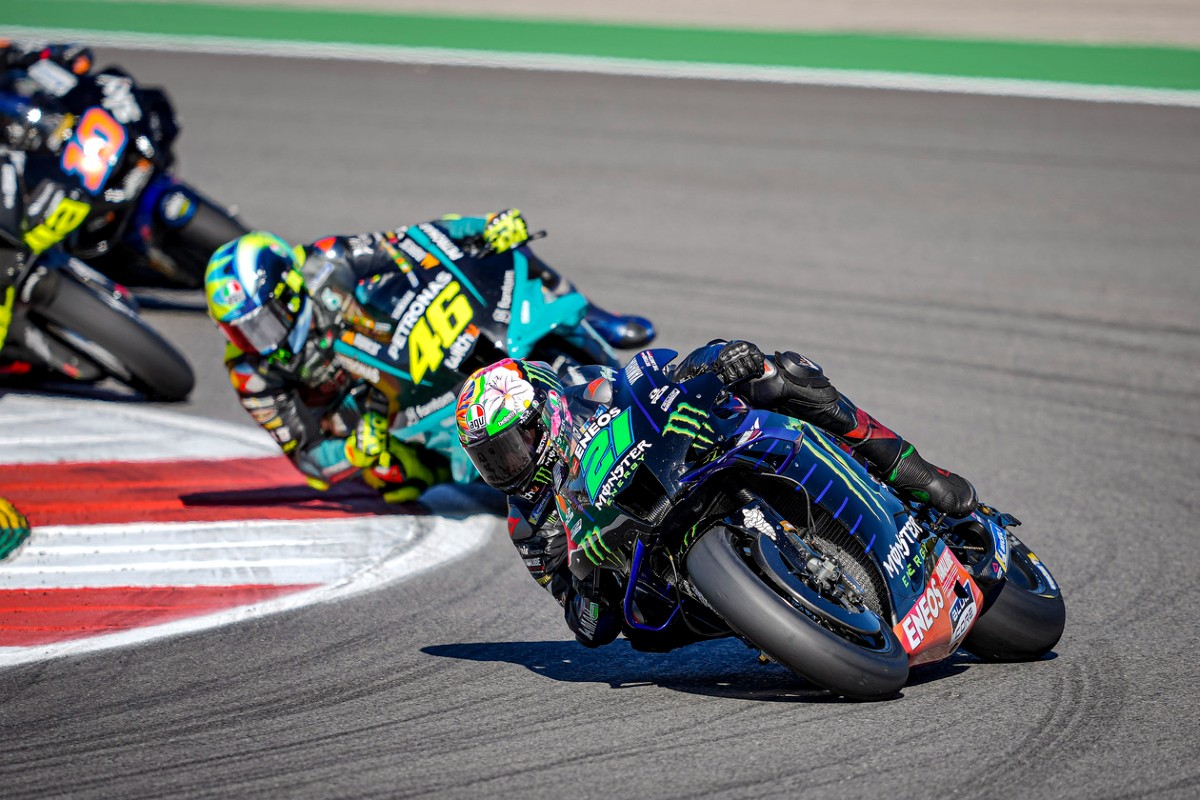 The Monster Energy Yamaha MotoGP riders were braced for a difficult Sunday at the Autódromo Internacional do Algarve, starting from the third row of the grid. The still injured Franco Morbidelli spent most of the race battling for championship points but couldn‘t make strides. He ended in 17th place after the race was red flagged with 2 laps to go. Fabio Quartararo’s hard work in the Grande Prémio do Algarve had him in contention for a top 5 placement, but a crash on lap 21 ended his challenge prematurely.

Morbidelli started the race from ninth on the grid. He made his Yamaha as wide as possible in the busy first lap and completed it in 11th position. The still recovering Italian had difficulty in the opening stages to get into a solid rhythm, but by lap 5 he had settled into fourteenth place and put in a low 1‘40s lap. He then got into a battle with Aleix Espargaró until the Aprilia man crashed out two laps later.

The number-21 rider thus continued his ride in 14th place. However, as the race went on, his knee injury started to hold him back. Though he dropped down the field in the second half, Morbidelli kept pushing. He ended the race in 17th place, 27.863s from first.

Quartararo didn‘t have the best of starts from P7 but made up for it in the first couple of corners, recovering to eighth over the line. He picked up two more positions, keen to close in on the leading group. Setting a fastest lap of the race thus far on lap 3 showed the Frenchman was serious.

With Alex Marquez and Jorge Martin battling amongst themselves, a gap started to form to the leading trio. El Diablo knew it was key to pass them both if he wanted to have a shot at a podium place. With 15 laps to go, the number-20 rider launched his first attack on Martin but went wide. As Quartararo was calculating where he would make his next move, he had a wobble in Turn 13 a lap later that allowed Johann Zarco through. It made life harder for the Yamaha man, but not impossible. He overtook Martin and was in sixth place when a crash on lap 21 in Turn 5 ended his challenge. It is his first NC result of the season.

After today’s race, 2021 MotoGP World Champion Quartararo keeps a 267 points total. Morbidelli stays in 17th place with 42 points. Monster Energy Yamaha MotoGP are still in contention for the Team Title. They are second in the standings with 364 points and a 28-point margin to first. Yamaha have secured second in the Constructor Championship having collected 298 points, with a 34-point disadvantage to first and a 71-point margin over third.

The Monster Energy Yamaha MotoGP Team will be back in action for the last race of the season at the Circuit Ricardo Tormo for the Gran Premio de la Comunitat Valenciana, held from 12-14 November.

Because of the speed that we put on track this weekend, I was expecting to have some more speed during the race. Unfortunately, that wasn’t the case. For sure, after some laps I needed to slow down to pace myself and finish the race. But generally, I was hoping to have more speed and it didn’t happen. We need to understand what happened, and we will figure it out before Valencia, I hope.

I know exactly what happened during the crash. I was too late, and I crashed. But it was a nightmare of a race. When I was behind our rivals, it was impossible for us to overtake. I think that during today’s race my pace was much better than what I showed. In our strong areas on the track we would recover a lot, but just in acceleration and speed we are too far behind. I think what helped me this season was that I started from the front row 14 times. As soon as you are in a bad qualifying situation like today, it gets difficult. Next week, I will focus a bit more on qualifying than race pace. It would be nice to finish the season in a proper way in Valencia.