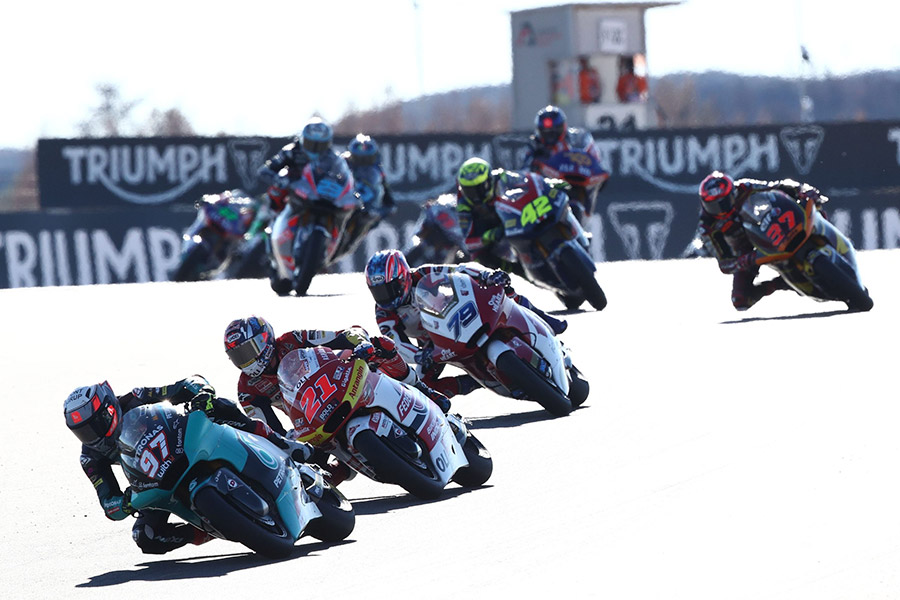 The Grande Prémio do Algarve came to an early conclusion for PETRONAS Sprinta Racing, with both Moto2 riders – Xavi Vierge and Jake Dixon – experiencing Turn 1 crashes at the Portimão circuit.

A great start from 11th on the grid saw Vierge move into eighth on the opening lap, before claiming another place one lap later. Making good progress and pushing hard in the early stages, the Spaniard made it into the top-five on lap 9. Unfortunately, Xavi’s race came to an early conclusion on lap 11, after losing the front end in a Turn 1 crash. Vierge goes into the final race of the year 11th in the championship standings with 83 points.

Team-mate Dixon also made up places at the race start, after initially dropping back from 20th to 26th, to go 16th in the opening laps. Settling into the 23-lap encounter, the Brit’s progress stagnated while he battled to make his way through the field. Sadly he was unable to demonstrate his true potential, after a crash in the same corner as team-mate Vierge – Turn 1 – meant his race came to an early end on lap 10. With 30 points Jake sits 20th in the riders’ standings.

The action continues next weekend for Vierge and Dixon with the Gran Premio de la Comunitat Valenciana (12-14 November) – the final GP of the year.

It has been a really good weekend for us until the race, especially as on Friday we could focus on the race pace and we had great rhythm with both tyres. For the race we decided to go with the soft rear tyre and now, looking back, I think the hard one would have been better. I felt good today though and I was trying my best to make a great comeback. I was in the group that could fight for the podium positions and it was a great battle, but I stressed the front tyre a bit too much and I crashed. It’s a pity because we’ve had the speed but I haven’t finished the last two races. We have nothing to lose and so we now focus on Valencia, where we can give everything to have a good result.

Warm Up was great, we made some good improvements with the bike and I felt really fast. In the race I was also fast, but on the first half of the opening lap I dropped back to 26th, but then on the second lap managed to get back to 16th. I had a really good pace and it was similar to that of the top-three, in fact I was lapping faster than one of the podium finishers at that time. I was waiting for the hard tyre to come in and lost the front going into Turn 1. It’s one of those things that can happen. I need to sort my Saturdays out because, as we’ve seen, my pace is fast in the race but I’m not able to put that one flying lap together.

#AlgarveGP
Get All Our Latest News Sent Direct To Your Inbox
Join 30,271 other subscribers.
Follow on Social Media
Get the VROOM Podcast