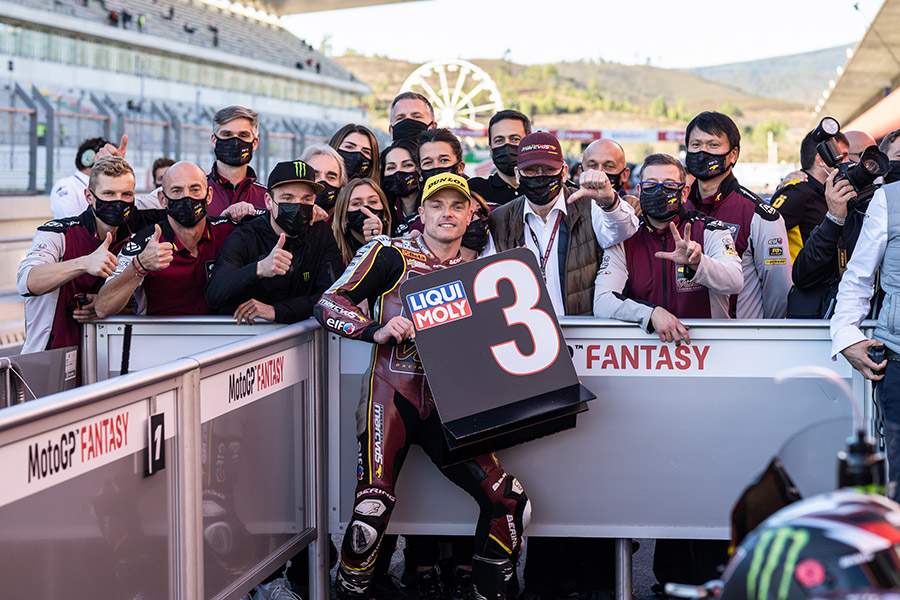 In an altered schedule to normal, the 17th race of the 2021 Moto2 World Championship was the final outing of the day, with riders attacking the wonderful Algarve International Circuit in perfect sunny conditions.

With both of Dunlop’s rear tyre compounds valid race options, Sam Lowes went for the harder option while Augusto Fernandez opted for the soft, meaning both men had to approach the 23-lap race in different ways.

Having qualified fifth, Augusto decided to use the soft rear tyre for the race. After a tough start, he dropped to ninth in the early laps at the back of a hectic fight for fourth place.

But the 24-year old soon realised he had made the wrong tyre choice and was struggling for rear grip. Augusto still fought until the end, and managed tyre degradation well to finish ninth, 13s off race winner Remy Gardner.

Augusto Fernandez
“The bike was perfect. We did a really good job in warm-up. We recovered after a bad start to the weekend, which is always really difficult to do here. We were ready to fight for the podium but we just made the wrong tyre choice. Apart from that, we tried to minimize the damage and take as many points as possible. I think we did a good job at the end of the race. The tyre was really worn but I still managed to be fast. I can’t complain about anything else – just the tyre choice. The bike was good again and we were ready for a podium fight. We’ll learn from this and I’m already looking forward to Valencia to finish the season strongly. I think we deserve a good result there.”

Sam Lowes got an excellent start from eighth on the grid, and made early progress through a multi-rider fight. By the sixth lap, the Englishman was fourth after excellent moves on Aron Canet and Cameron Beaubier.

Lowes’ progress didn’t end there as he passed Marco Bezzecchi for third on lap 16 and posted his personal best lap on the 20th circuit. No one was faster than Sam in the closing laps and he came home third, just 0.885s off second place.

Sam’s fifth podium of the season sees him cement his fourth place in World Championship with 181 points.

Sam Lowes
“This was a really important race for me. At Misano it was nice to get the winning feeling back. This year has been up and down. I have had one good result then one mistake. So it was nice to back up the win with a podium, especially after the race here in April didn’t go to plan. We did a really good job as a team. In the sessions we didn’t look too much at the position, we just worked on the pace, trying to understand the best direction for the race. That’s a good sign of the team coming together and me being more confident in myself. I can take a lot of confidence from this result. If I qualified higher, maybe it could have been better. Overall, I’m satisfied. I have a bit of a score to settle with Valencia after last year’s injury! So, I’m looking forward to that. It would be nice to finish the season on a high and we’ll keep working away.”