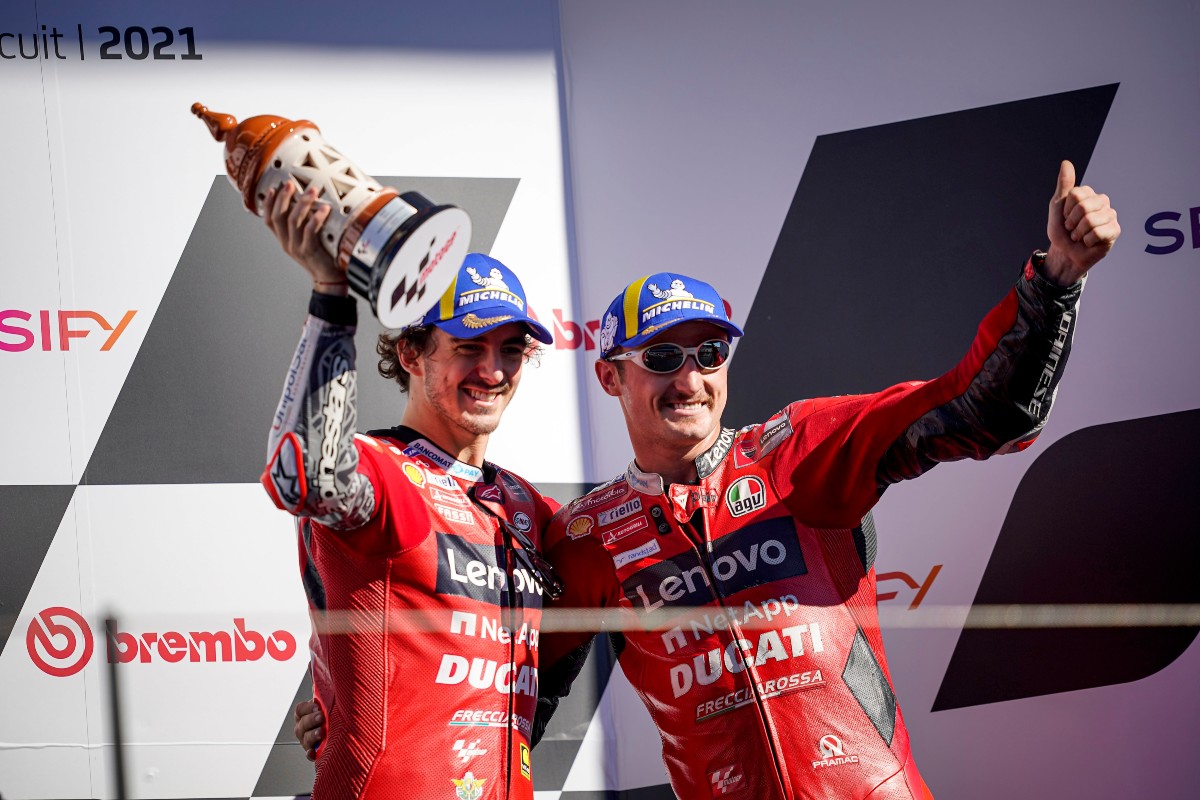 Thanks to another sensational victory by Pecco Bagnaia at the Autodromo Internacional do Algarve in Portimão (Portugal), Ducati secured the MotoGP Constructors’ World Championship for the second consecutive time, one race ahead of the end of the 2021 season. Today, the Italian manufacturer won its third World Title in the premier class at the Grand Prix Brembo of Algarve, on the same track where it secured its second title last year, 13 years after its first.

In addition to the success of the Italian rider, author of a flawless race that he led from start to finish starting from pole position, four other Ducati riders contributed to the victory of the 2021 Constructors’ World Championship, including teammate Jack Miller, third in today’s race. The Australian rider, who started from the second spot on the grid, was able to secure the third step of the podium by overtaking Alex Márquez a few laps before the red flag ended the race with still two laps to go.

After today’s race, there is still one Grand Prix left on the 2021 MotoGP calendar, the Gran Premio de la Comunitat Valenciana, scheduled in less than seven days from 12th-14th November. On that occasion, the Ducati Lenovo Team will aim to secure the Team World Title as they currently lead the standings by 28 points over the second-placed team.

I’m really happy! I would have liked to finish the race under the chequered flag and not under the red flag, but it was still a stunning victory. It was an incredible weekend, and I enjoyed every single session. Right from the start, I felt incredibly comfortable. Everything was perfect, and I’m really happy for Ducati for winning the Constructors’ Title. We deserved it once again! Congratulations to Jack for his third place on the podium. Now we’ll go to Valencia where we’ll try to finish this season with another great result.

It’s nice to finally be back on the podium, even though it was a little strange to end the race with a red flag. I was ready for a big battle on the last lap with Alex Márquez, who was really close. But I’m thrilled: we have worked well all weekend, and in the last GP, we were able to be competitive in all sessions, just missing the result on Sunday. Finally, we were able to reap the benefits of our hard work today. I’m happy Ducati won the manufacturer’s title: we have a fantastic bike, perhaps the strongest on the grid! Now we go to Valencia and try to close out this season in the best possible way.

The best motorcycle in the world is Made in Italy. Ducati is MotoGP Constructors’ World Champion for the second year in a row. This remarkable success fills us with pride. Once again, the teamwork of engineers and riders has given excellent results. The Desmosedici GP has proved to be very competitive, bringing on the podium 5 out of 6 riders who raced on Ducati bikes during the Championship. Pecco Bagnaia, Jack Miller, Jorge Martin, Johann Zarco, Enea Bastianini and Luca Marini have all been extraordinary. I want to thank them for giving us a season full of emotions with six victories and a record of 21 podiums, despite one race still to go. We have bet on these young talents and on their energy without being disappointed. A big thank you also to the entire Ducati Corse team for bringing home this great result once again, working with the passion and determination that has always distinguished every member of the Ducati family on track. Now we just have to close the season in the best way possible with the race in Valencia and then look forward to next year with the desire to improve more and more.

It’s really a great satisfaction to be able to win the Constructors’ World Championship again this year, and I’d like to thank our riders and all the men and women of Ducati Corse who have contributed to this incredible success. We’re still a little disappointed about the riders’ title because it was really within our reach this year. Again today, Pecco rode a perfect race and didn’t make the slightest mistake all weekend! It has been a great season, and he is a great rider. Congratulations also to Jack! We are happy that he was finally able to get back on the podium after showing he could be fast during the last Grands Prix.