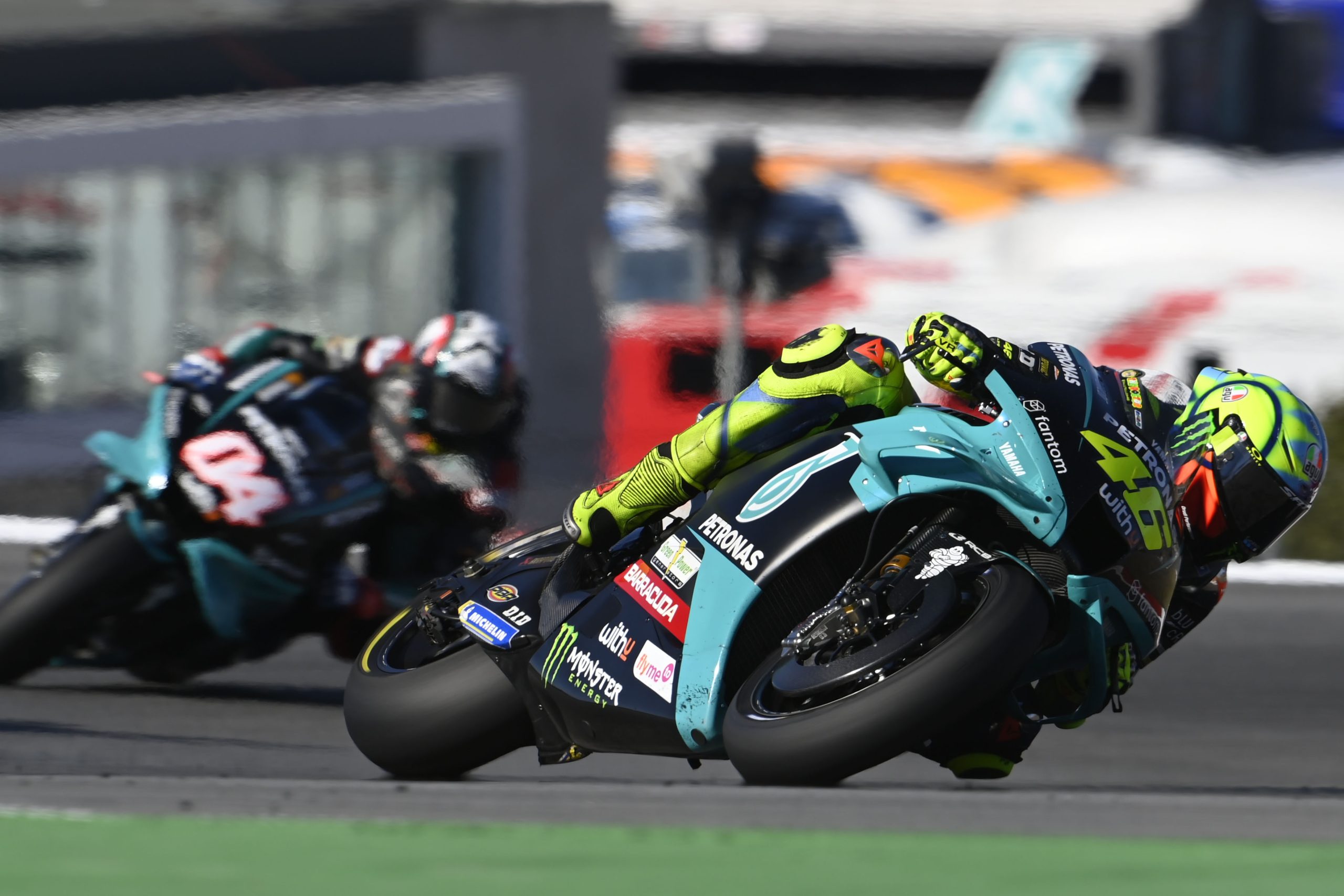 It was a double points finish for PETRONAS Yamaha Sepang Racing Team’s MotoGP riders today in Portugal, with Valentino Rossi and Andrea Dovizioso crossing the line 13th and 14th respectively in what became a shortened Grande Prémio do Algarve.

A good start for Rossi saw him maintain his 16th place off the line and into the opening corners of the race. The Italian gained a spot one lap later, but found himself back in 16th shortly after. Battling hard to close the gap to the riders ahead, Valentino enjoyed a brief battle with former team-mate Franco Morbidelli on his way to making it inside of the points positions on lap 21. Sitting in 13th place when the red flags came out because of a double crash with two laps to go, Rossi earned himself three points in his penultimate MotoGP race.

Team-mate Dovizioso also had a strong start to the race, claiming one place off the line to take the first corner in 20th. Gaining another place in the early stages, the Italian had his work cut out to reduce the deficit to the main field. Able to find more pace in the final stages of the race, ‘Dovi’ moved into 16th with five laps to go. Making further progress to find himself one place behind team-mate Rossi in 14th when the race was brought to it’s early end, Andrea made it a double-points finish for the team.

Rossi and Dovizioso will now travel across the border to Spain for the final round of the season: the Gran Premio de la Comunitat Valenciana, which will also be Rossi’s final MotoGP race of his career and last race for PETRONAS Yamaha SRT.

Today wasn’t too bad and I was able to take some points as well, which was our first target. The race was quite fast and I had a good pace, especially compared to the practice sessions, plus I felt good with the bike. We were able to enjoy some battles with Franco [Morbidelli] and some other guys, and I was able to stay with Luca [Marini]. He was faster but in some places I could recover some time and go with him. We were able to push until the final stages and I wanted to try to attack in the final laps but the red flag came out. There was a really nice atmosphere today because the previous two times at Portimão we raced without fans, but they were here today. I want to say ‘ciao’ to everybody and thanks for the support. I had planned to stop out on track at the end of the race, but with the red flag I was unable to.

It has been a good weekend in terms of my personal progress, because every practice has been dry, I have been able to work on the way I ride the bike and I feel that I’ve made some improvements. This has given me the possibility to be quite fast in the middle of the race and until the end. This is good because it means we are going in the right direction. Of course 14th isn’t the position I want and my speed can still be improved, but overall it has been a positive weekend. There are still things to be improved, with both myself and the bike, because we don’t have the grip we want and it means we can’t stay with the other riders or ride in a smooth way.

#AlgarveGP, Valentino Rossi
Get All Our Latest News Sent Direct To Your Inbox
Join 30,271 other subscribers.
Follow on Social Media
Get the VROOM Podcast
Download our Vroom.GP App