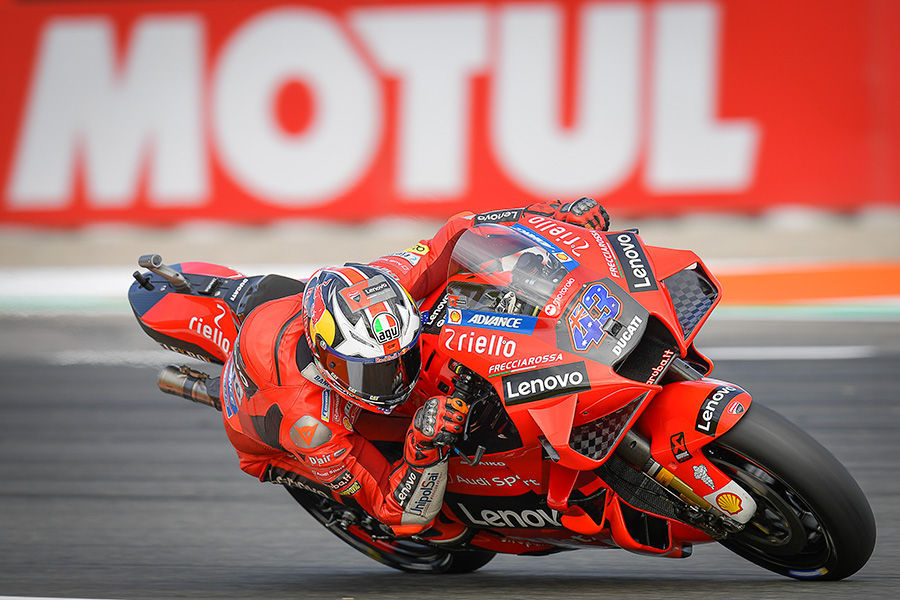 It was a close Day 1 at the Gran Premio Motul de la Comunitat Valenciana, with Ducati vs Honda at the top and Jack Miller (Ducati Lenovo Team) taking final honours by the end of play. FP1 was wet before the sun came out in the afternoon and created a frenetic mini-qualifying session, leaving Miller, Pol Espargaro (Repsol Honda Team) in second and Francesco Bagnaia (Ducati Lenovo Team) in third covered by just 0.068.

Valencian Iker Lecuona (Tech3 KTM Factory Racing) started the day on top as he impressed in the wet. The Spaniard’s 1.40.569 was good enough to beat second place Miller – who was a late crasher at Turn 1 – by 0.155s, while Miguel Oliveira (Red Bull KTM Factory Racing) completed the top three.

Unexpected rain started to fall just before the premier class’ opening session, handing the riders some tricky conditions to deal with on Friday morning. Danilo Petrucci’s (Tech3 KTM Factory Racing) final MotoGP™ weekend got off to a painful start as the Italian suffered a nasty off-throttle highside at Turn 4, but thankfully Petrux was able to walk away from the crash.

Bagnaia tucked the front at Turn 2 soon after – rider ok, as was Luca Marini (Sky Avintia VR46) as he also took a tumble.

The rain did stop and conditions improved towards the end of the session, which saw plenty of riders improve their times. Johann Zarco (Pramac Racing) and Joan Mir (Team Suzuki Ecstar) rounded out a top five split by 0.374s, and less than a second covered the top 12.

With the track dry enough for slicks, FP2 was all action from the get-go. And just like 2021 rival Bagnaia did in the morning, World Champion Fabio Quartararo (Monster Energy Yamaha MotoGP) tucked the front at Turn 2 – rider ok. It was Bagnaia who led the way in the early stages of FP2, but Franco Morbidelli (Monster Energy Yamaha MotoGP) moved the goalposts with just over 20 minutes remaining, a 1:31.832 the new benchmark.

Heading into the ever-exciting final 10 minutes, Morbidelli led Miller by 0.071s, with Takaaki Nakagami (LCR Honda Idemitsu) and fellow HRC rider Pol Espargaro going well in the top four. New rubber than came out for many as attentions turned to the top 10 and a provisional place in Q2.

Immediately, the standings changed. Miller went top with a 1:31.409, with Andrea Dovizioso (Petronas Yamaha SRT) launching to P2. The timing screens were changing constantly though and it was a proper mini qualifying session in Valencia – Miller, Pol Espargaro and Bagnaia all exchanged P1.

Pol Espargaro then crashed on his final lap at Turn 6, rider ok, with Miller’s penultimate lap handing the Australian P1 to prove the final decider.

With rain in the morning it’s FP2 times that make the combined timesheets. You could split the top trio of Miller, Pol and Pecco with a tyre blanket, but then there’s a bit of a gap to Alex Rins (Team Suzuki Ecstar) in fourth. The Spaniard is 0.409s down on P1, while Jorge Martin (Pramac Racing) rounded out the top five – also 0.4s shy.

Nakagami had a solid opening day in P6, the Japanese rider just ahead of 2020 World Champion Joan Mir (Team Suzuki Ecstar) in seventh and Brad Binder (Red Bull KTM Factory Racing) in eighth. Dovizioso slipped to P9 by the time FP2 had ended but a top 10 is a fantastic Friday result for the Italian as he cotninues to adapt to the 2019 M1. Johann Zarco (Pramac Racing) occupies P10 ahead of Saturday’s action.

That starts at 9:55 (GMT +1), before the final qualifying of the season from 14:10. Pecco has six poles so far and Quartararo five… will that change in the season finale? With Quartararo down in P11 after Friday, the Frenchman will be looking to bounce back strong in the morning…

Day 1 of the Moto2™ title-deciding weekend is done and dusted, and it’s just 0.008s between World Championship leader Remy Gardner and Red Bull KTM Ajo teammate Raul Fernandez, his sole remaining challenger for the crown. In a dry afternoon at the Gran Premio Motul de la Comunitat Valenciana, the Australian’s best was a 1:35.857, with his teammate that close second and Augusto Fernandez (Elf Marc VDS Racing Team) keeping the top three tight as the number 37 ended Friday just 0.041s off the top too.

Augusto Fernandez pipped Joe Roberts (Italtrans Racing Team) to top spot in FP1, with just 0.020s splitting the duo. Fernandez’ 1:45.968 in the damp conditions saw the Spaniard beat third place Hector Garzo (Flexbox HP40), who had one crash and also pulled off a stunning save, by two tenths.

Sam Lowes (Elf Marc VDS Racing Team) headed to the medical centre after an early crash, the British rider later declared fit, while Tom Lüthi (Pertamina Mandalika SAG Team) also crashed early in the session – not the way the Swiss rider would have been looking for at his final Grand Prix but rider ok.

Raul Fernandez was the pacesetter for most of the session as the riders were continually finding time on an ever-improving Circuit Ricardo Tormo. With just under four minutes to go though, Gardner took over at the summit by that 0.008s margin as we enjoyed a familiar sight at the top – a Red Bull KTM Ajo 1-2.

On his final lap, Raul Fernandez returned the favour on Gardner to go back to P1, but the Spaniard’s quickest time was then chalked off due to him having exceeded track limits at Turn 12, leaving Gardner on top. Augusto Fernandez and rookie Celestino Vietti (SKY Racing Team VR46) got to within a tenth of the top time as 0.087s covered the top four. Xavi Vierge (Petronas Sprinta Racing) was fifth, and still only just over a tenth off the top.

There were no fallers in FP2.

With the sun coming out in the afternoon, it’s FP2 that sets the pace. Gardner leads the way ahead of Fernandez R, with Fernandez A third. Vietti and Vierge complete that top five.

Reigning FIM Moto3™ Junior World Champion Izan Guevara (Valresa GASGAS Aspar Team) topped FP1 at the Gran Premio Motul de la Comunitat Valenciana with a 1:39.561, and after the rain came down and no one was also to improve in FP2 either, that ensures the Texas winner is the fastest man on Friday. It wasn’t by much though, with Darryn Binder (Petronas Sprinta Racing) just 0.048s further back. Andrea Migno (Rivacold Snipers Team) completed the top three as the final race weekend of the season fires into life, the veteran Italian on form once again.

Guevara, Binder and Migno led the way and with heavy rain coming down near the end of the session, that was all she wrote. But the number 28 GASGAS rider was in the driving seat regardless as he looks to end the year on a high.

Filip Salač (CarXpert PrüstelGP) and 2021 World Champion Pedro Acosta (Red Bull KTM Ajo) were inside the top five in FP1, and there were zero crashes to begin the weekend.

Dennis Foggia (Leopard Racing) topped the times in a mixed FP2, but conditions didn’t allow anyone to improve. The rain had started to fall just as Moto3™ FP1 ended, and the track hadn’t fully dried out by the time the lightweight class came back out for their afternoon session.

A mostly quiet outing played out, with Foggia fastest ahead of an impressive job from Joel Kelso (CIP Green Power). Salač was third, with Niccolo Antonelli (Avintia VR46 Academy) fourth with more good speed. Migno was a couple of tenths further back in fifth.

Adrian Fernandez (Sterilgarda Max Racing Team) was the only crasher, the Spaniard heading for the medical centre but given the OK.

With the track conditions still not ideal in the afternoon, it’s FP1 that sets the pace for Moto3™ on Friday. So Guevara lead Binder leads Migno, with Salač fourth and Acosta fifth.

That’s the top ten on Day 1, but we can expect that to change on Saturday morning – and Foggia will hope so as the Italian is down in P27 overall. FP3 starts at 9:00 (GMT +1), before qualifying from 12:35 for the final lightweight class race of the season.