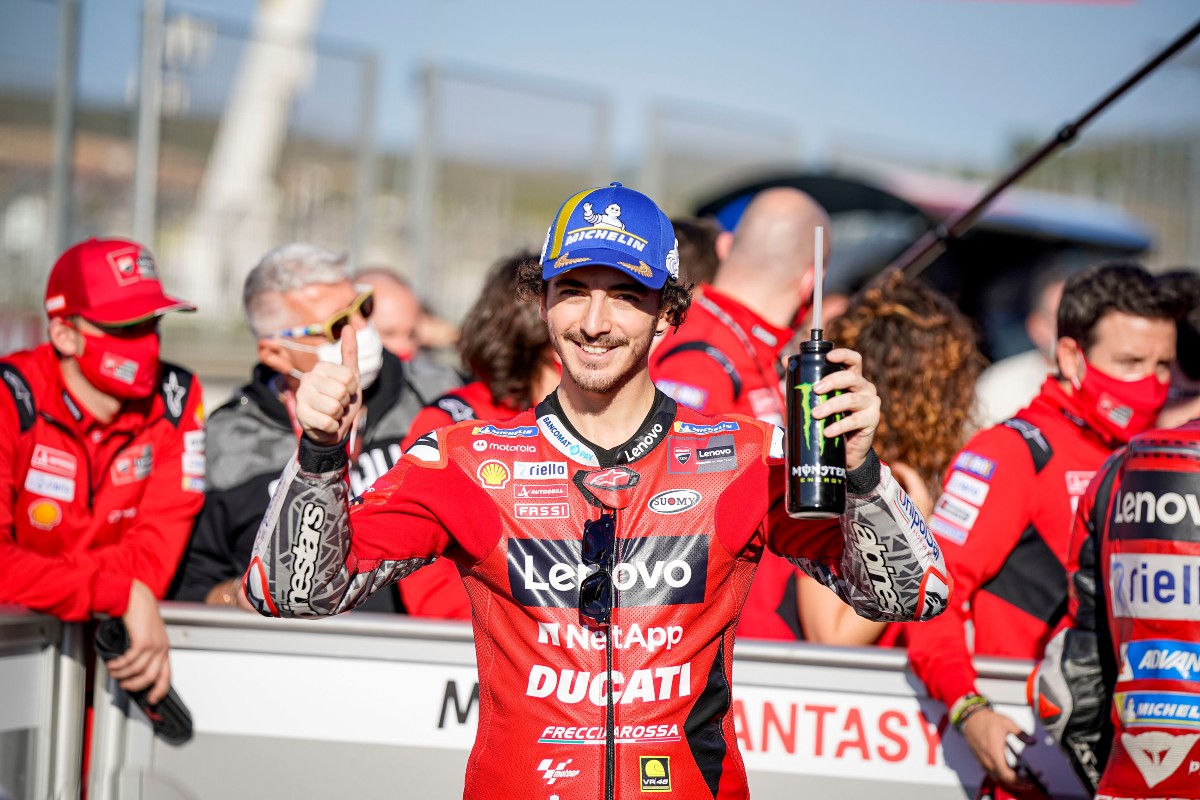 For the third consecutive Grand Prix, Pecco Bagnaia and Jack Miller will start side-by-side from the front row of the grid in tomorrow’s race at the Circuit Ricardo Tormo in Cheste (Spain), stage this weekend of the Gran Premio de la Comunitat Valenciana, the final round of the 2021 MotoGP season.

As he was fast already at the end of free practices, which he closed with the fourth-fastest time overall, Bagnaia was able to conquer in qualifying the start from the front row of the grid for the twelfth consecutive time. Thanks to a fast lap of 1:30.000, the Ducati Lenovo Team rider secured the second spot, despite suffering a crash during his final time attack attempt while he was improving.

Jack Miller had a similar fate. On his last flying lap in qualifying, he had a small crash just a few moments after Bagnaia. However, that didn’t stop him from securing a front-row start for the eighth time this year and finishing Q2 with the third-fastest time in 1:30.325, 325 thousandths behind his teammate.

For the second time this year and for the second time in Ducati’s MotoGP history, there will be three Ducati bikes on the front row of the grid. In fact, it will be Jorge Martin, Pramac Racing rider, to start from pole position alongside the Ducati Lenovo Team duo. With Johann Zarco in fifth place, four Desmosedici GPs will start from the first two rows of the grid in tomorrow’s Grand Prix.

I’m happy with today’s result in qualifying. Unfortunately, I was pushing too hard on the last lap and crashed. Despite that, we’re starting from the front row, from the second position, and that’s a good result. Valencia is not one of the tracks that best suits my riding style, and this is the first year I have been able to be competitive here. All weekend I have struggled to be perfect on a single lap, but the pace for the race is good. We’ve been working well all weekend, and we already know what tyres we’ll use for the race, so I’m positive and ready for the final Grand Prix of the season.

This was our last qualifying session of the year, so I really tried to give everything and once again, I was close to the pole. During the last lap, I crashed at turn 9, and maybe I was pushing a little too hard, but in any case, I had fun: the good feeling I have with my Desmosedici and the good weather conditions today allowed me to take advantage of the full potential of my bike. I feel like I have a good pace for tomorrow’s race, and now we just have to figure out exactly what tyre choice to make for it. It would be nice to end the season with a third win!

The Ducati Lenovo Team riders will take to the track tomorrow at 9:40 am for the warm-up, while the final race of the 2021 MotoGP season will get underway at 2 pm local time over a 27-lap distance.

#ValenciaGP
Get All Our Latest News Sent Direct To Your Inbox
Join 30,253 other subscribers.
Follow on Social Media
Get the VROOM Podcast