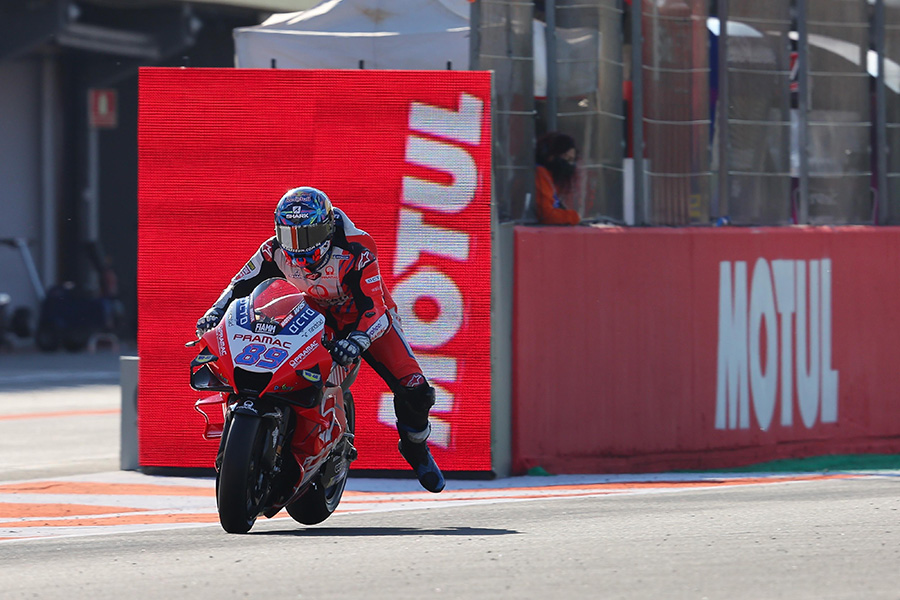 Jorge Martin (Pramac Racing) put in a stunner at the Gran Premio Motul de la Comunitat Valenciana to take his fourth pole position of the season and Ducati’s first at the Circuit Ricardo Tormo since 2010, his final push enough to depose Francesco Bagnaia (Ducati Lenovo Team) by just 0.064. It’s an all-Ducati front row with Jack Miller (Ducati Lenovo Team) in third, with the factory riders suffering a crash each but once again, Bologna bringing the noise on Saturday afternoon. That’s now 11 poles for the manufacturer this season, and there’s been a Ducati on the front row at every single Grand Prix. They’ve taken 30 front row placements out of 54, to be exact.

As ever it went to the wire, but it was 2020 front row starter Alex Rins (Team Suzuki Ecstar) who topped the session, with Brad Binder (Red Bull KTM Factory Racing) heading through alongside.

Miguel Oliveira (Red Bull KTM Factory Racing) ended the session last after a tough day at the office, but behind him even is Pol Espargaro (Repsol Honda Team). After such a strong Friday, the Spaniard had a monster highside in FP3 and headed to hospital for check ups. No major injuries were found, but the team confirmed the number 44 would sit out the rest of Saturday.

The first true benchmark came from Miller. The Australian put in a 1:30.325 to top the timesheets, with Bagnaia slotting into second and Mir third. Incredibly, Martin then did exactly the same time as Miller, although the Spaniard took over in second as his second best was a little off the Australian’s.

As the second runs began though, Bagnaia came out swinging. Already on pole six times this season, the Italian was gunning for glory at a tougher venue. He went faster and then put in a 1:30.000 exactly, showing some serious speed at a venue he’s struggled at in the past.

Still, it wasn’t over. After a low drama tip off for Bagnaia at Turn 2 interrupted laps for some behind the Italian, red sectors appeared once again – this time from Martin. The rookie was flying and just under a hundredth up on Bagnaia into the final sector. Could he hold onto it? Over the line, he could… setting a 1:29.936 to just pip Pecco to pole. Miller was also on a fast one and even further up, but the Australian then crashed out – rider ok – and that was all she wrote. Martin faces down the fight for Rookie of the Year from the best place possible: pole.

Martin’s pole is his fourth of the season after a stunning premier class debut, and he heads the grid at the venue where he took his first Grand Prix win in Moto3™. It’s an all-Ducati front row as Bagnaia and Miller line-up alongside for the battle of the Bologna bullets into Turn 1.

Joan Mir (Team Suzuki Ecstar) may not have taken another front row, but he had another great qualifying. He said after the Algarve GP he wanted to start routinely qualifying on the front two rows, and in the pre-event Press Conference in Valencia the 2020 Champion said he wanted to se if they could replicate the quality qualifying… so that’s mission accomplished in fourth. Alongside the number 36 on Row 2 are Johann Zarco (Pramac Racing), to make it four Ducatis in the top five, with Rins in P6 going from Q1 to make it two Suzukis in the top six.

Binder likewise converted the chance from Q1 into a good grid position, the South African taking P7 to head the third row. He’s joined by reigning Champion Quartararo as the Frenchman had another muted Saturday, out of the top six for the third race in a row.

Ninth went to Takaaki Nakagami (LCR Honda Idemitsu) ahead of one of the best recent qualifying sessions for Rossi in tenth, the ‘Doctor’ also having gone straight through to Q2. Franco Morbidelli (Monster Energy Yamaha MotoGP), who also went straight through, is P11, with Aleix Espargaro (Aprilia Racing Team Gresini) taking P12.

That’s an interesting grid to round out the season. A Ducati front-row lock out, Mir with a lot less work to do on Sunday and Rins too, and of course, a farewell for the ‘Doctor’… Valencia promises much and will likely deliver even more, s tune in for the final race of the season, and of an era, at 14:00 (GMT +1). History guaranteed!

the two title rivals were on track together in the opening exchanges, and at the end of everyone’s second flying laps, Raul Fernandez was quickest. Gardner, meanwhile, was P8. That soon turned to P11 as some faster laps were slotted in, with Fabio Di Giannantonio (Federal Oil Gresini Moto2) and Aron Canet (Inde Aspar Team) less than a tenth down.

With six minutes to go, Augusto Fernandez leapt to P1 as we then saw the top five split by less than a tenth, with Q1 pacesetter Corsi going P5. Vietti ensured Augusto Fernandez’ time at the summit was short lived but Corsi, shadowing the Spaniard, found a 1:34.956 to go provisional pole.

Drama then unfolded for one of the title contenders. Raul Fernandez crashed unhurt at Turn 2 with three minutes left on the clock, and that was the Spaniard’s session done. Di Giannantonio went pole but his lap got cancelled and the Italian couldn’t then repeat it on his next effort, and no one else able to better Corsi. So the experienced Italian claims a remarkable pole position and the second for MV Agusta at Valencia in the last two years.

Behind Corsi, Vietti and Augusto Fernandez, Di Giannantonio will start P4 ahead of Raul Fernandez in P5. The latter only has one option on Sunday afternoon if he’s to have any chance of winning the title: victory. Lüthi will join Raul Fernandez on Row 2 in P6, which is a cracking effort from the fourth-highest Grand Prix appearance maker.

Canet launches from P7, only place ahead of the World Championship leader Gardner. The Australian will wrap up the title if he finishes in P13 or higher, no matter what Raul Fernandez does – a good start and staying out of trouble will be imperative for Gardner. Jorge Navarro (Termozeta Speed Up) and Sam Lowes (Elf Marc VDS Racing Team) rounded out a top 10 that were covered by just 0.223s.

Newly-crowned Moto3™ Champion Pedro Acosta (Red Bull KTM Ajo) signed off from the lightweight class in style on Saturday, with the number 37 saying he was on a mission to take a pole position before he graduates to Moto2™ and getting the job done. His 1’38.668 puts him three tenths clear of Tatsuki Suzuki (SIC58 Squadra Corse) in second, with rookie Izan Guevara (Valresa GASGAS Aspar Team) completing the front row after having been fastest on Friday.

Acosta is also the 12th different rider on pole this year, equalling the record for the most in a Moto3™ season from 2019.

There were some surprises in Q1, including Niccolo Antonelli (Avintia VR46 Academy) and Sergio Garcia (Valresa GASGAS Aspar Team), but both moved through with a 1-2 in the session. So did rookie Xavier Artigas (Leopard Racing), already a wildcard podium finisher at the track, with Lorenzo Fellon (SIC58 Squadra Corse) the final graduate into the fight for pole.

There were two incidents for Ayumu Sasaki (Red Bull KTM Tech3) in a difficult Saturday for the Japanese rider. After the second crash he went for a check up and was declared fit, but is set to line up on the back row.

Guevara set a 1:39.223 to lead the way in the early stages of Q2, with Q1 graduate Garcia making it a Valresa GASGAS Aspar Team 1-2. That soon changed though, Andrea Migno (Rivacold Snipers Team) moving up into P2 after a second flying lap, but the Italian – along with Dennis Foggia (Leopard Racing) in third – was still a tenth down on Guevara.

The riders then piled back into pitlane before the session burst into life. All the riders would only get one lap in, and the timing screens were littered with orange and red sectors. Garcia, who had been shoved down to P6, climbed back up to P2 but the Spaniard wouldn’t stay there. A flying group of Fellon, Migno, Foggia, Suzuki and finally Acosta all crossed the line in quick succession to fire in personal best times, and it was the 2021 World Champion getting that pole position he so desperately craved.

Behind Acosta, Suzuki and Guevara, Migno spearheads Row 2. He’s joined by Filip Salač (CarXpert PrüstelGP) after more good form for the Czech rider this weekend, with Fellon in P6 to equal his best ever.

Foggia is seventh ahead of compatriots Romano Fenati (Sterilgarda Max Racing Team) and Antonelli in an all-Italian third row. Garcia had to settle for 10th after the late flurry of times, and will be gunning to move through.